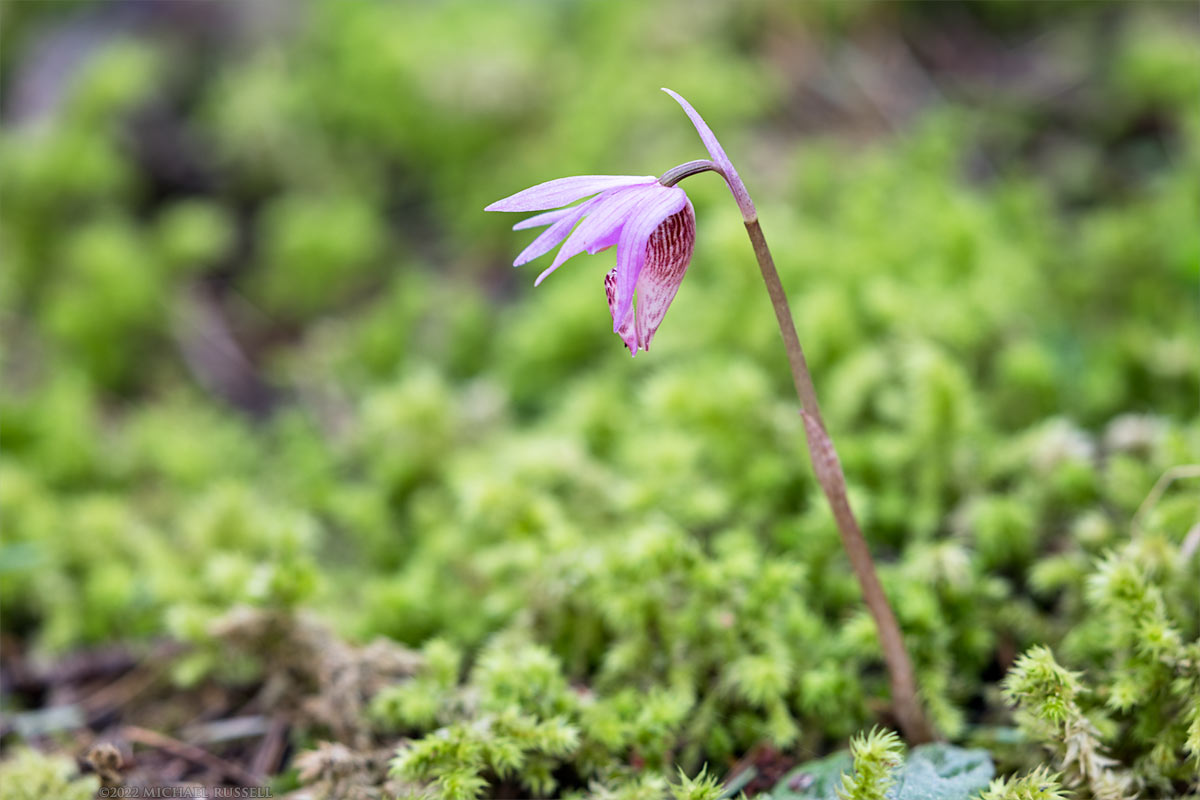 During my trip to Salt Spring Island in April, I visited Ruckle Provincial Park and spent many hours walking around, hiking, and taking in the views from various shoreline trails. Initially I spent about 45 minutes photographing Ruckle Heritage Farm which I outlined in my previous post. After photographing the farm I headed into the forest and shoreline trails to see what I could find. There are great trails in Ruckle Provincial Park that give a variety of views ranging from farmland, ocean, forests, and beaches. One thing that especially caught my eye during that walk was the variety of wildflowers. Most of these species I’d not seen on the mainland, and were new to me entirely.

The first photograph here is a Fairy Slipper (Calypso bulbosa var. occidentalis) which is also known as Calypso Orchid or Venus’s Slipper. These orchids have no nectar, and trick Bumblebees into pollinating them through deceptive scents and shapes that mimic nectar containing flowers. I don’t think I’ve seen any orchids in the wild before, so this was a nice find. The entire flower and stem shown here was maybe 5cm (2inches) tall at the most. Very easy to miss while walking by in the forest! 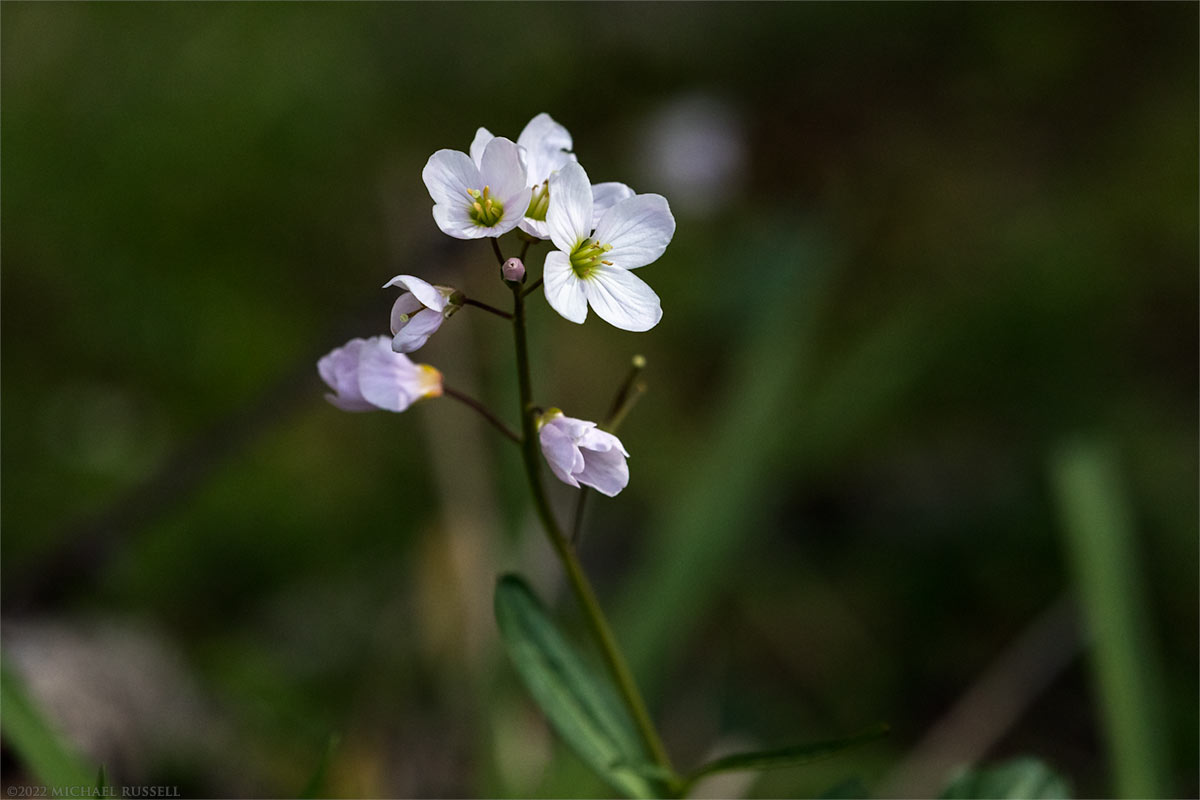 When I photograph almost anything from buildings to animals, plants, mountains, lakes, creeks etc – I always try to find the proper name for the location or species. Wildflowers I’ve never seen pose a bit more of a challenge, as I’m not quite as sure where to start in a guidebook or other ways of identifying a species. Another hurdle can be that many species look nearly alike, and sometimes identification would have to come down to characteristics not revealed in a photograph. In the case of the variety of Cardamine species I found on Salt Spring, a lack of good photos of the leaves didn’t help me out any! I really need to engrave something like “photograph the leaves too!” on the back of my camera so I have those as a tool for identifying later at home. The Cardamine above I am fairly sure is a Cardamine nuttallii or Slender Toothwort. This species also goes by the names Beautiful Bittercress, Nuttall’s Toothwort, and Palmate Toothwort. I also photographed Angled Bittercress (Cardamine angulata). There are a few other Cardamine species that all look very similar which made narrowing these down a big of a lengthy challenge! Mountain peaks are comparatively easy. 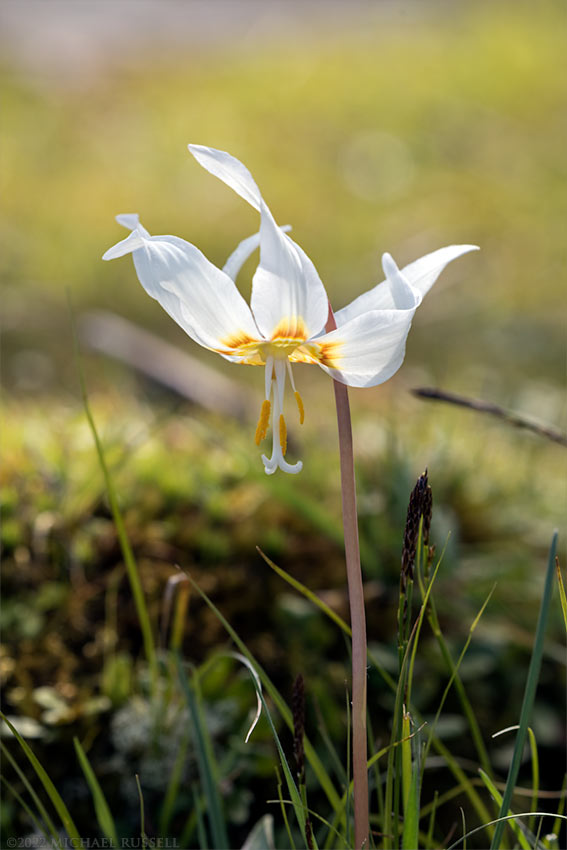 One species I had not seen before, but was anticipating seeing while on Salt Spring were the White Fawn Lilies (Erythronium oregonum). I was not disappointed – they were very frequently seen in Ruckle Provincial Park. Not a easy plant to photograph I discovered, especially when there is a bit of wind. The flowers point down so I made a lot of exposures (read: way too many) trying various angles. I liked the photograph above as it is backlit, and the sunlight shining through highlights the orange and yellow colours near the centre of the flower. The photograph below shows the White Fawn Lily in the kind of environment I usually encountered them – underneath some tree cover (in this case a Garry Oak) and mixed in with grass and other plants. Their usual environment in southern British Columbia is along the coast at lower elevations in forests and open meadows. This species is also known as the Giant White Fawn Lily. 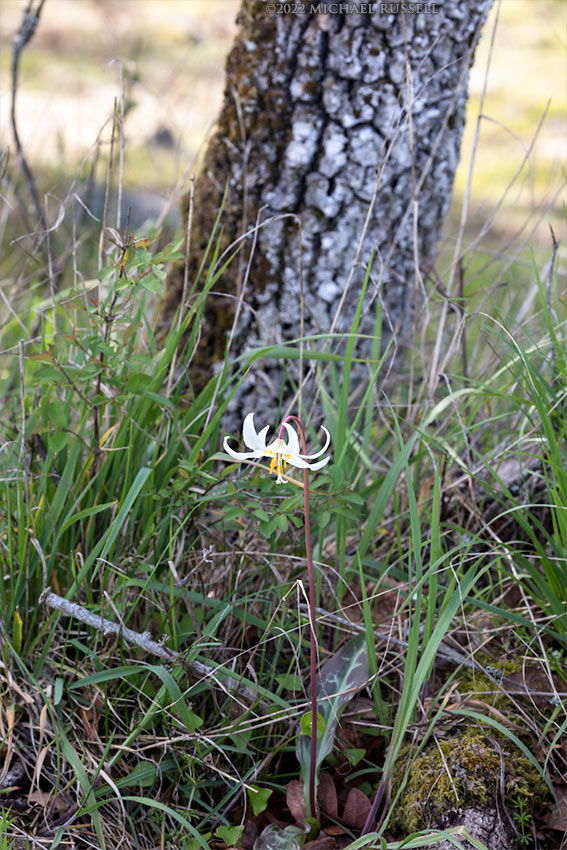 I was attracted to these Large-flowered Blue-eyed Mary (Collinsia grandiflora) flowers (below) initially due to their blue color but then because of the large amount of Bumblebees zipping about from flower to flower. The flowers are quite small, but were growing in large groups, usually mixed in with various mosses, on the more open spots along the rocky shoreline at Ruckle. Bees on flower photos are not something I normally attempt in a park – it can be a low percentage of a success much like other fast moving wildlife, but I couldn’t resist this time. It all worked out as this particular Bumblebee was moving from flower to flower a bit slower (and close to where I was on the trail), and I was able to make a sharp photograph as it collected nectar from these flowers. The yellow sacs you see on the bee’s back legs are called Corbiculae or Pollen baskets and are used for collecting pollen. 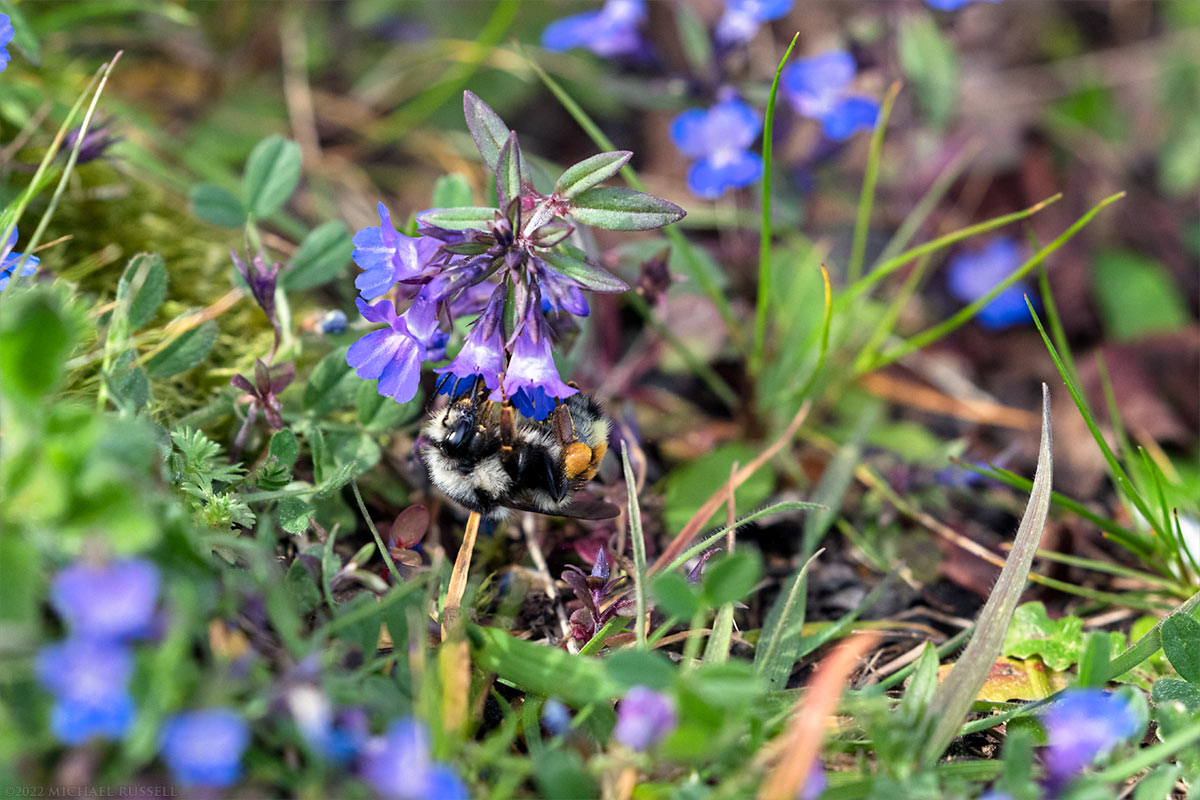 Much like the Fairy Slipper in the first photograph, I’m lucky to have spotted this Fringed Redmaids (Calandrinia ciliata) flower nestled in the mosses and grasses in an open area along the shoreline. Not a species I was familiar with, but they are said to be quite common on the Southern Gulf Islands. 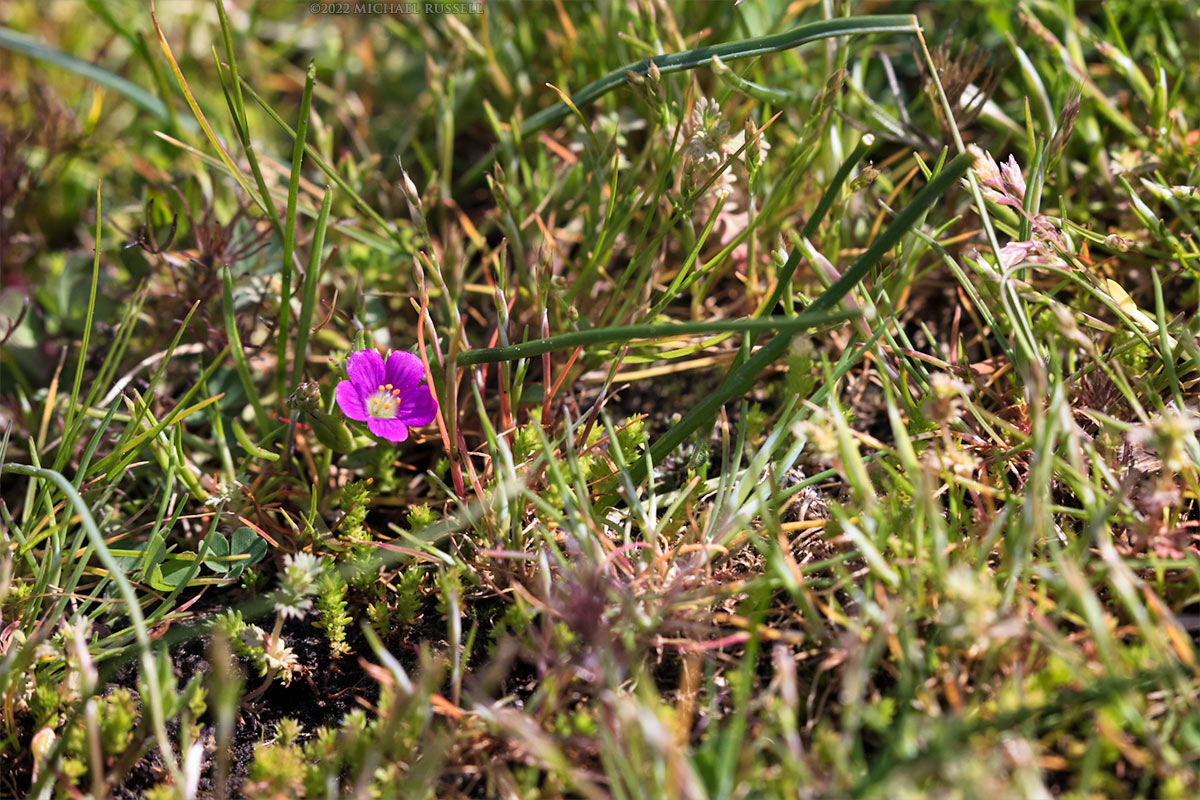 I came across this Chickweed Monkeyflower (Erythranthe alsinoides) blooming in an open area in the campground at Ruckle Provincial Park. I’d previously photographed Harvest Brodiaea in almost the same spot a few years ago. This Monkeyflower is sometimes listed as Mimulus alsinoides or Wingstem Monkey-flower. 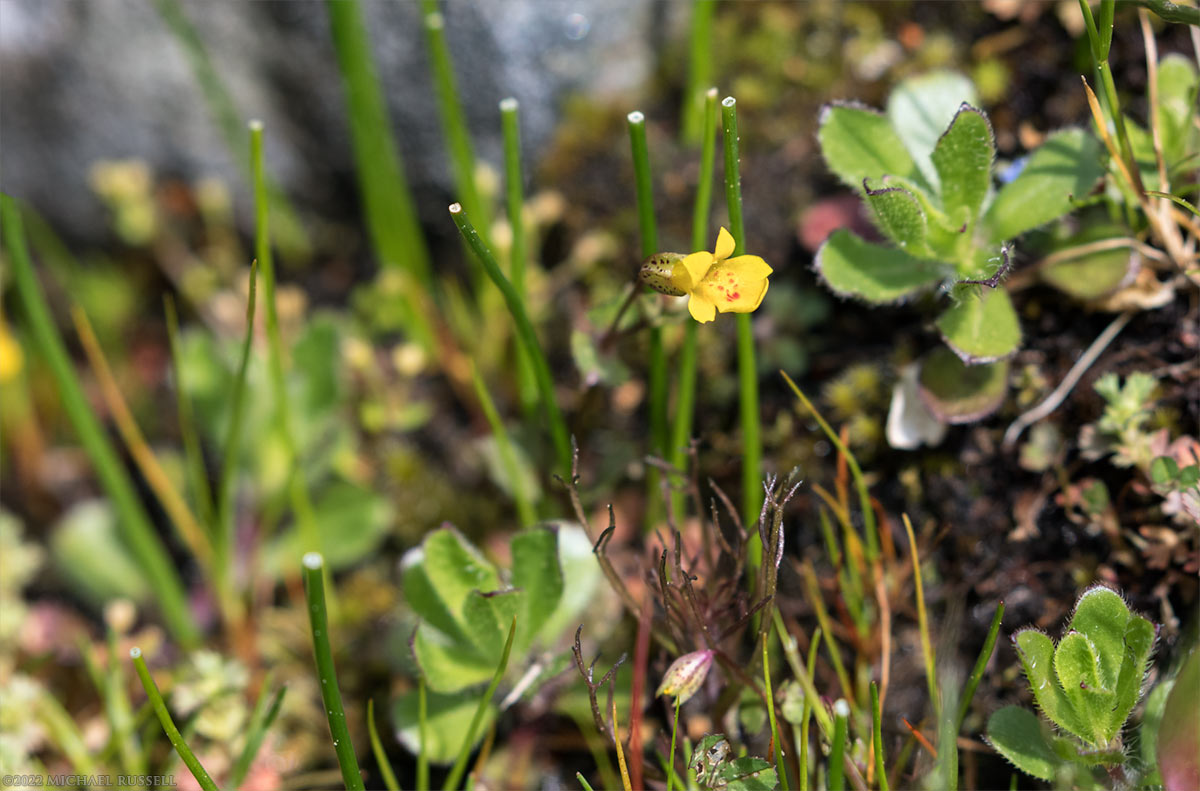 I also had some luck spotting these Small-flowered Woodland-Star (Lithophragma parviflorum) flowers on the forest floor. While they are larger than the orchid, this was the only one I saw. L. parviflorum is also known as the Small-flowered Fringecup or Prairie Star, and is part of the Saxifrage family. 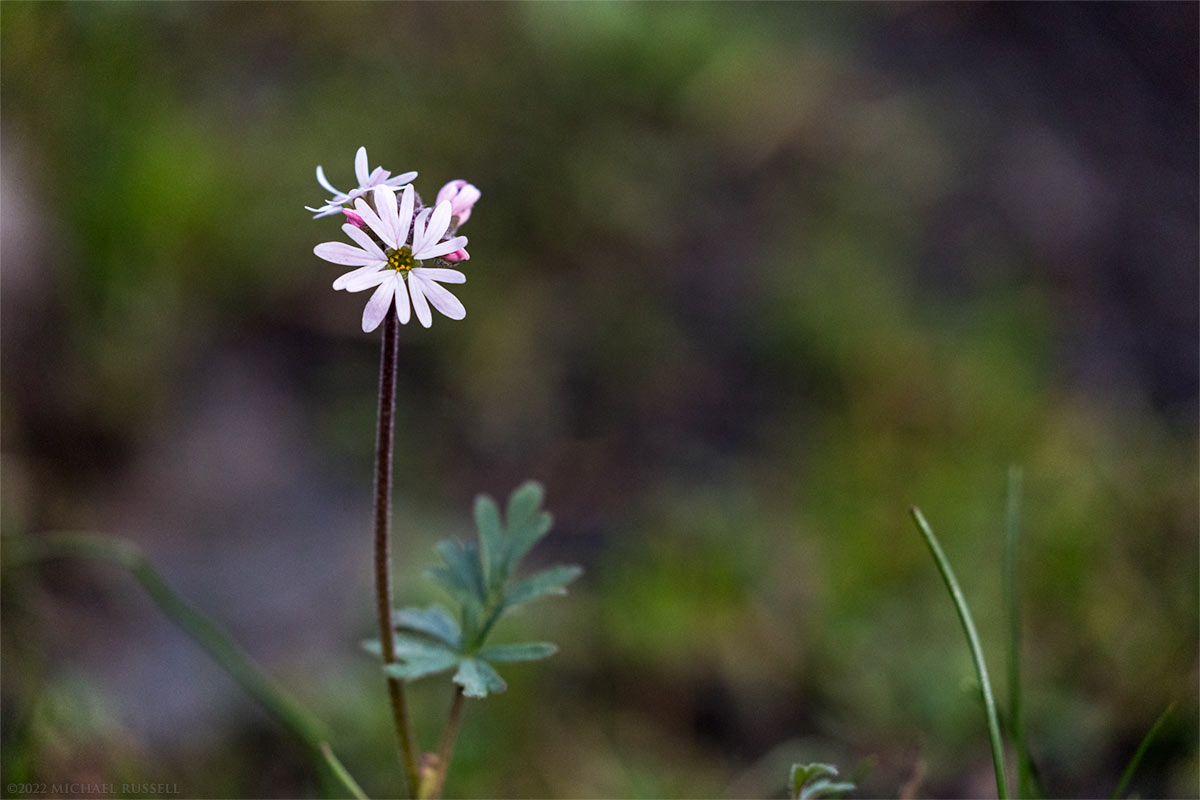 I’m cheating slightly with the photo of a Common Stork’s-Bill (Erodium cicutarium) flower below, as I didn’t photograph it at Ruckle. The day before I was in Burgoyne Bay Provincial Park with my friend who lives on the island and spotted this one at the base of some Garry Oaks. The Stork’s Bill is another flower I don’t think I’ve seen before. Unfortunately, it is an invasive weed from Europe and not native to British Columbia. For some reason it always feels slightly disappointing to look up a species you’ve just discovered only to find it the name starts with “common”! While we were in Burgoyne Bay my friend pointed out some birds in the water along the shore he hadn’t noticed before. Common Mergansers, of course. 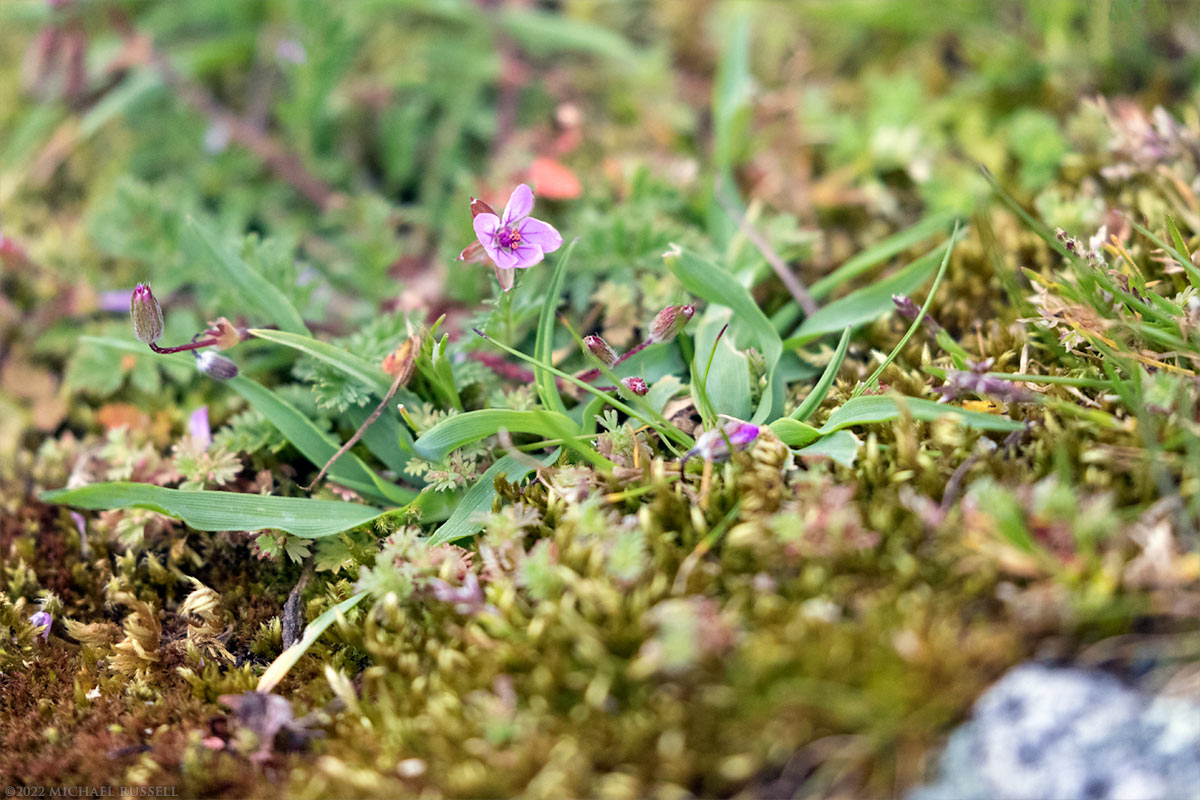