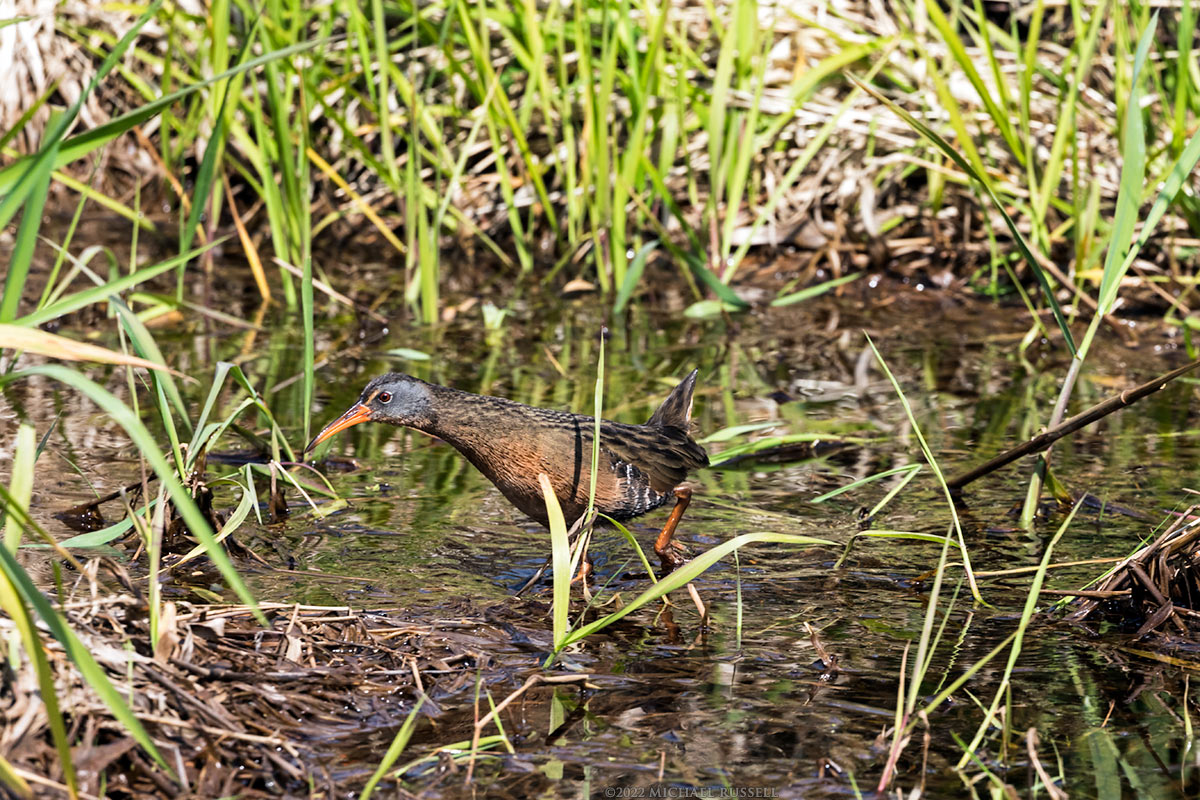 Recently I was walking through a Fraser Valley park and saw a bird run across the trail – and it was unlike one I’d seen before. It struck me as the shape of bird that I’d normally see on the shoreline near the ocean, but this was well inland and in a fresh water marsh/wetland area and had interesting orange colours going on with its chicken like gait. New species are fun to discover! While I had no idea what kind of bird this was, I stopped and hoped that I could improve on the few, hurried, photos I made as it headed into the tall grass on the side of the trail. I knew it was still just a few feet into the grass as i could hear the occasional call here and there. A horse and rider ran by (a shared equestrian/pedestrian trail) but the calls didn’t stop, so I guess this particular bird wasn’t too bothered by traffic nearby. Soon it reappeared, not lingering anywhere but wading past with its attention to the water for invertebrates to eat, I presume. I consulted my phone app for bird identification (Merlin) at the time and it seemed likely this was a Virginia Rail (Rallus limicola) which I have since confirmed. 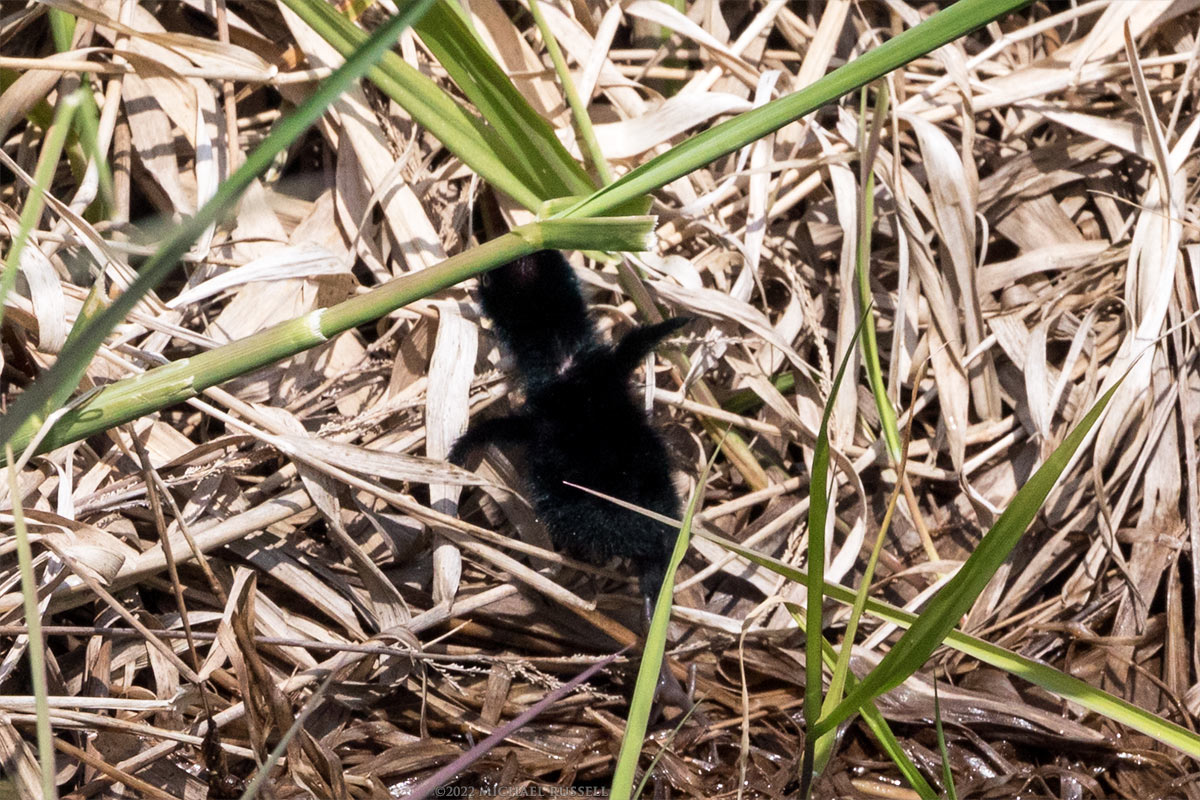 My app also indicated this bird was rare. Upon further research it seems they aren’t rare exactly, but rare to see, an important distinction. While its existence is not aided with the draining of wetlands, the population remains in sufficient abundance to not be currently “threatened” (listed by the IUCN as a species of Least Concern). At any rate, I hadn’t spotted a Virginia Rail before so this was quite interesting in itself. Even more interesting was what I saw next. I’d seen a small black shape scamper around in the water/grasses near the adult, but had initially dismissed it as small rodent of some kind. Once it crossed some water and struggled to get up a small incline, I saw it flapping tiny wings during the attempt (photo above). This was a Virginia Rail chick likely quite recently out of the nest. Evidently newly hatched chicks only remain in the nest for 3-4 days before they get out and start moving around. They also molt for the first time at around 2 weeks of age, with the black feathers giving way to new ones. So this chick was likely somewhere around 4-14 days old. Another thing I didn’t expect! When the Virginia Rail parent made another pass I made the first photograph above, and left the area as there were likely more chicks around and I didn’t want to draw any attention to them.

As I walked away from the Virginia Rail family, I noticed this male Mallard Duck (Anas platyrhyncho) swimming nearby. I am not sure if it was my presence alone, or some other event, but this Mallard seemed mad. I have not heard one of these ducks utter such a cacophony of sound before. It seemed really ticked off, and flew away shortly after I photographed it. I felt compelled to name this particular photograph “Beaking Off” as a result. 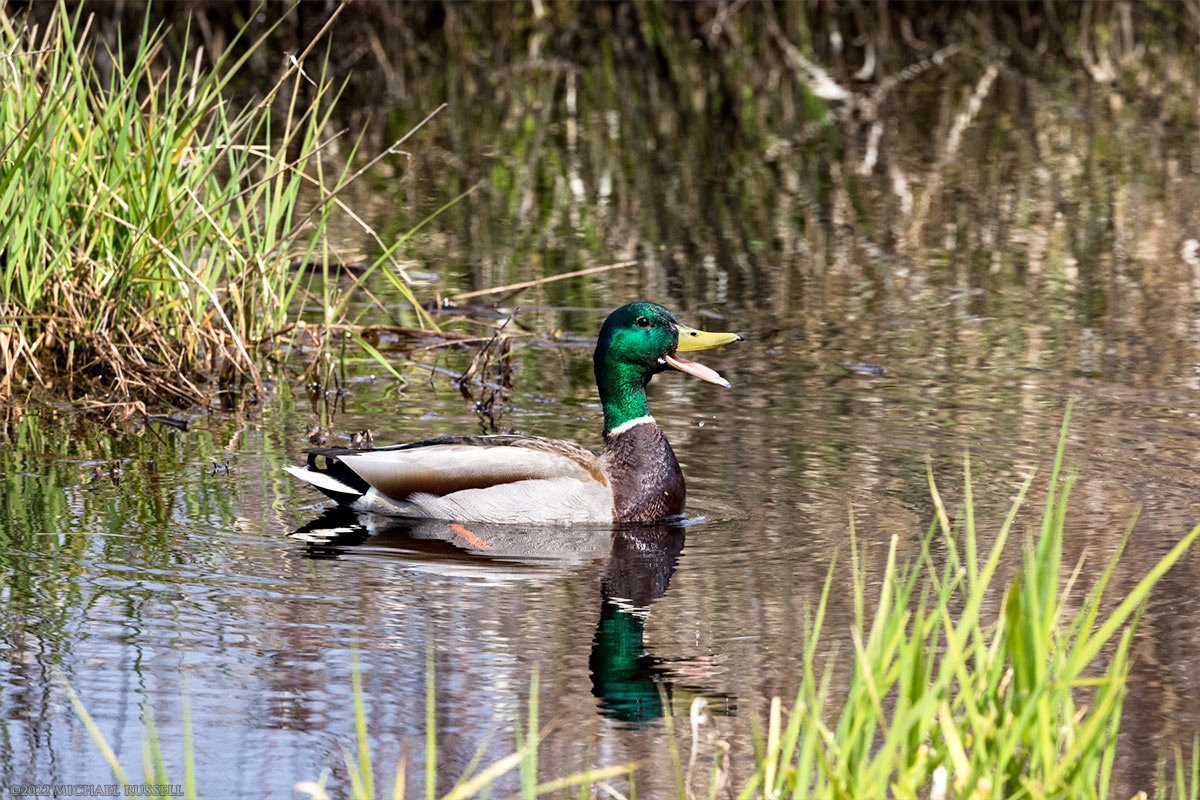 You can see more of my bird photographs in my Birds gallery.