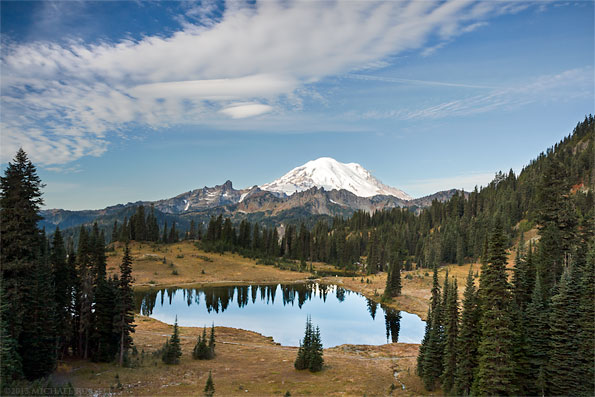 On the last day of my 2010 trip to Mount Rainier National Park I got up early and attempted to photograph sunrise at Tipsoo Lake. In what became a learning experience I did not confirm the hotel alarm clock was set to the right time. Consequently I got out of bed too late despite setting the right alarm time which made me miss sunrise. Well, if only I had – I was forced to watch the entire sky turn orange from my car before I had reached the lake. Despite this, I did enjoy walking around the lake, alone, in below freezing temperatures with frost on the now dying wildflower plants. I didn’t really appreciate how peaceful this was until I visited Tipsoo a few years later in the Summer during the peak of the wildflower season.

This photograph was made from the viewpoint along SR 410 above Tipsoo Lake. On the right is the edge of Yakima Peak, the Cowlitz Chimneys, Barrier Peak and Governors Ridge can be seen in the center.