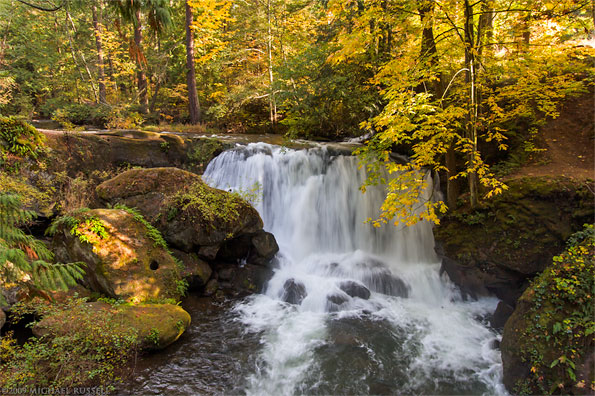 Whatcom Falls park in Bellingham is one of the few US based places I remember going to as a kid from British Columbia. I remember going down and spending the afternoon fishing and having lunch or dinner on one of the park benches. When I visited it again probably 20 years later I remembered the name, but not the waterfalls or what I was about to find to photograph. I made this image way back in 2009, but it remains one of my favourites of the main falls in Whatcom Falls Park. I occasionally “complain” about the fall foliage colours in this part of the world, but it looks like 2009 was a great year! Most of the fall foliage we get around here are from the Bigleaf Maple trees (Acer macrophyllum), or sometimes from the smaller Vine Maples (Acer circinatum). When they get the right conditions they can really give some great colors. The above photograph is the view at Whatcom Falls park of the main waterfall from the Limestone Bridge that crosses Whatcom Creek. Most of the fall foliage colours in this first photograph are from Bigleaf Maple trees. 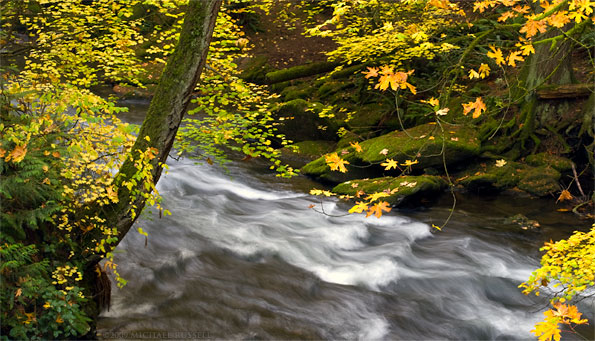 This second photograph is the view looking downstream on the other side of that same Limestone Bridge. There are a few larger Bigleaf Maple leaves in this photo but most of the colour here comes from the smaller leaved Vine Maples.

For my other photographs of Whatcom Falls Park please visit my Washington State Misc. Photos Gallery in my Image Library.

Edit: This is a very old post. If you are looking for much better (newer) photographs of Whatcom Falls Park – visit my new blog post: Whatcom Falls Fall Foliage Colors.

About a month ago I once again travelled down to Bellingham to Whatcom Falls Park. I had planned on taking a few pictures there then moving onto Whatcom Lake, which I had never actually seen. However, as I have written about before, my battery had other plans. These are among the few shots I managed to take before the battery death. 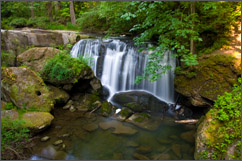