A pair of Western Trillium (Trillium ovatum) flowers in the forest at Campbell Valley Regional Park in Langley, BC. 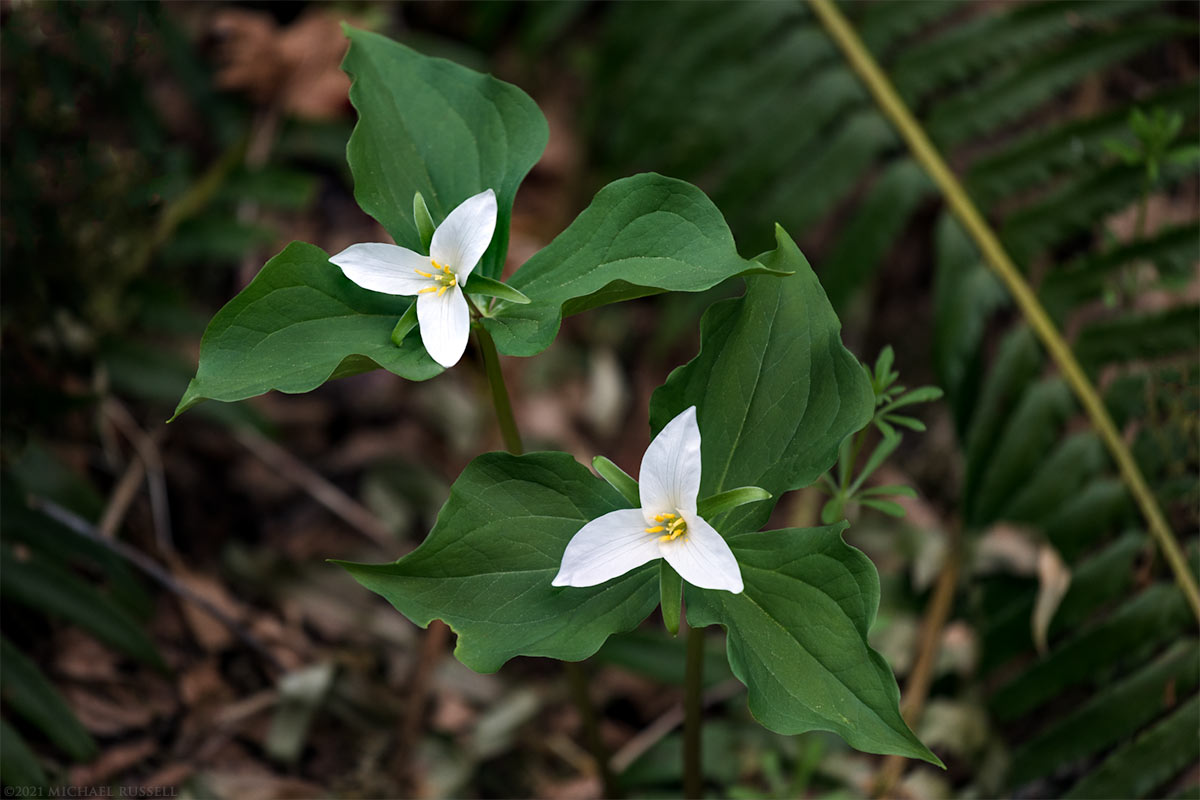 A number of years ago I temporarily gave up on photographing Western Trilliums in the various parks I frequent as I wasn’t having much success. I enjoy finding these somewhat rare flowers in the forest, and usually photographed them each spring along with the much more common Pacific Bleeding Heart (Dicentra formosa). While I had some success about 10 years ago, for quite a few years I came up empty, got the timing wrong, or someone had picked the flowers. So for a few years I didn’t have these flowers on my spring agenda specifically, and photographed other subjects instead. I came across the flower below next to a cedar tree while not really looking for photography subjects and a few days later came back and made all of the photographs in this post in one afternoon.

Western Trilliums are also known as Pacific Trillium, Wake Robins, and Western White Trillium. They grow in western North America, from here in Southern BC down to central California, and as far east as Alberta, Idaho, and Montana. Trilliums are a perennial plant that grows up above the surface from rhizomes. Technically, they do not produce true leaves above the ground. The stem is considered a part of the rhizome and the above ground part of the plant is an upright flowering scape. The leaf like structures, which most still generally refer to as leaves as they are photosynthetic, are bracts – a kind of modified leaf. One familiar example of bracts are the bright parts of the poinsettia “flower”, which are not the true flower, nor are they true leaves. 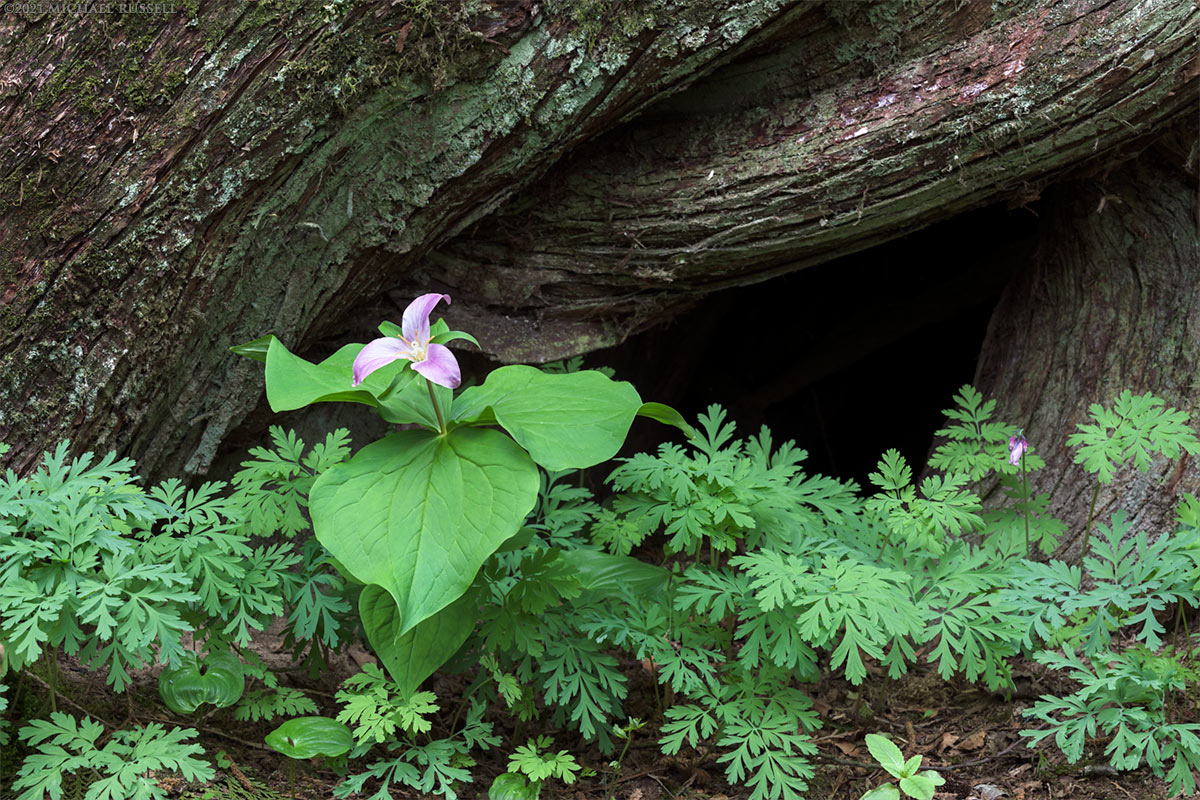 The Western Trillium tends to be found growing in coniferous and mixed coniferous-deciduous forests here in British Columbia. The two places I found them the most frequently this year were those kinds of forests in Langley’s Williams Park and the Metro Vancouver’s Campbell Valley Regional Park. The first photograph here shows a pair of Trillium blooms in Campbell Valley Park, in a mostly coniferous forest. The second photograph above shows a maturing flower at the base of a cedar trunk along with a frequent companion – the Pacific Bleeding Heart (Dicentra formosa). Despite the much higher than usual traffic on the trails this spring I was happy to find no flowers that had been picked. In southwestern British Columbia Trilliums can most often be found flowering in March or April, with some still lingering into May depending on the weather. I photographed all of these in the third week of April. 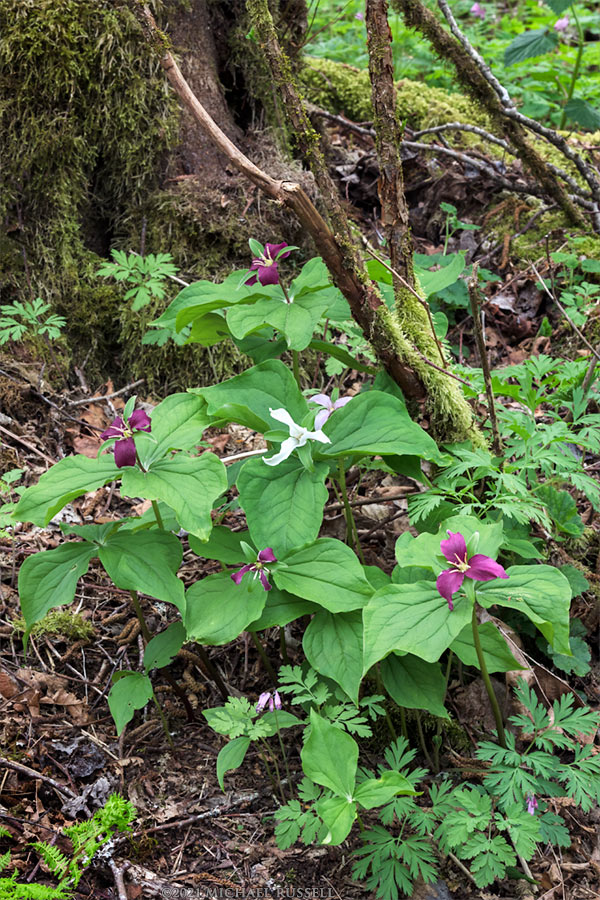 A group of Trillium flowers growing on the forest floor (Purchase)

Some T. ovatum plants emerge as individual stalks, but sometimes can be found in a group. I am not sure if they will grow multiple stalks from the same rhizome, but in the photo above, I would think this large group is the result of multiple plants growing in the same area.

Western Trillium flowers start out white, but as they mature turn a pink or purple colour. I photographed the flower below in Williams Park, and it had turned a very nice dark shade of pink/purple at that time. You can see the brown starting to form on the lower left petal which is a sign this flower had nearly reached the end of its display. The numerous seeds from the resulting fruit is quite attractive to ants and is often dispersed by them as they take the fruit back to their nests. 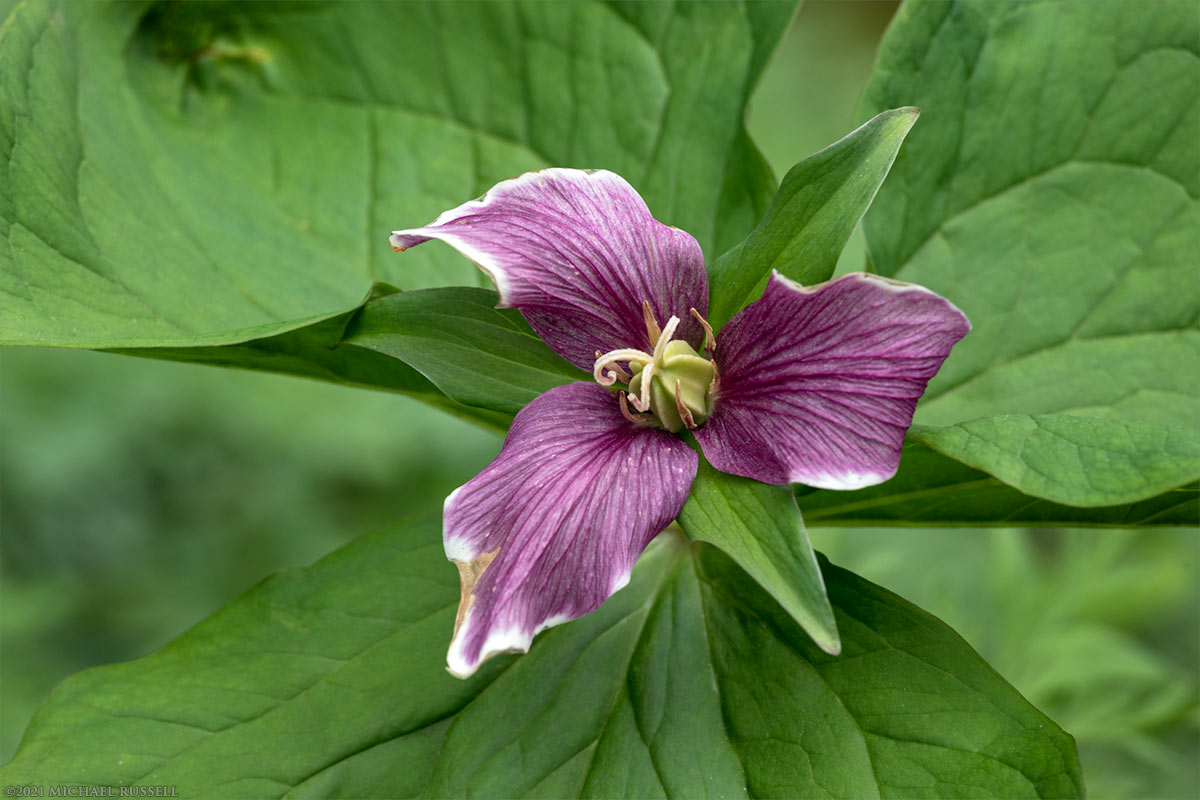 While mature Trillium plants will keep the above ground portion of the scape intact for a time after flowering (given there is sufficient moisture), the less mature tend to disintegrate the above ground plant more quickly. 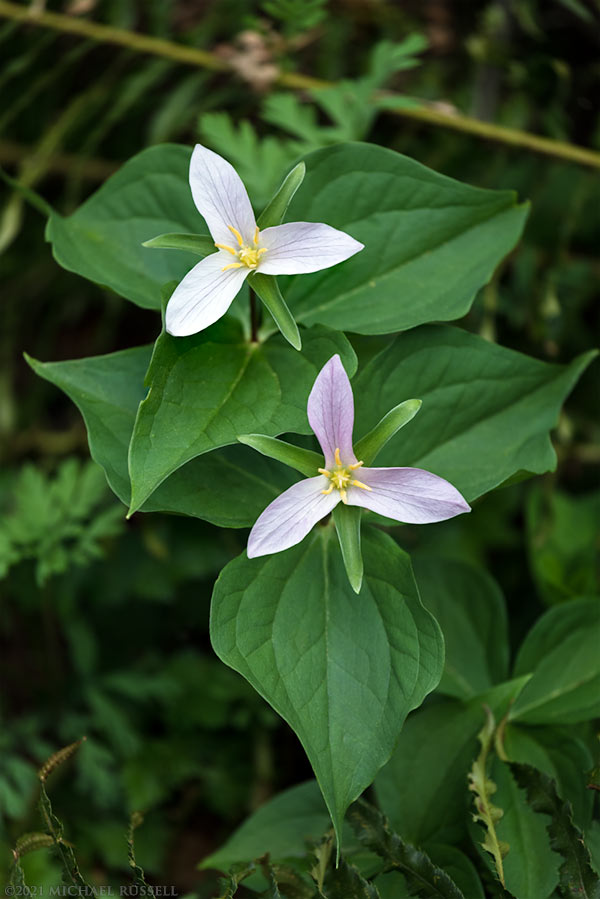 Pair of Trillium Flowers Growing Together under the Forest Canopy (Purchase)

Depending on conditions T. ovatum may go into dormancy for a few years before growing an above ground scape and flowers again. This could be one reason I had little success for a few years in finding them, though it seems unlikely they’d be dormant all at once in such numbers. The Trillium below was interesting as it was all by itself, there were very few other plants around it on the forest floor. I’d previously mostly frequently encountered them mixed in with Bleeding Hearts, Sword Ferns, False lily-of-the-valley, Foam flower, or under Salmonberry Bushes. 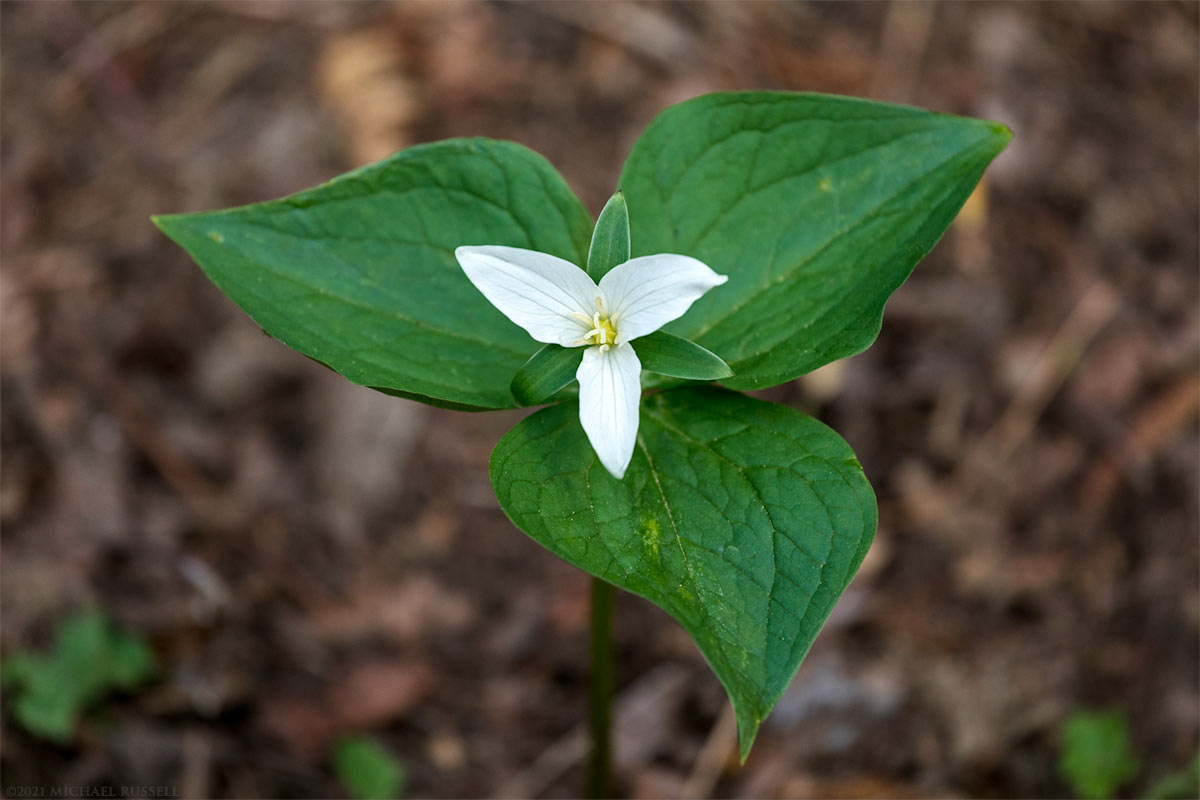 For more photographs of Trilliums and other wildflowers visit my Wildflower Photos Gallery. 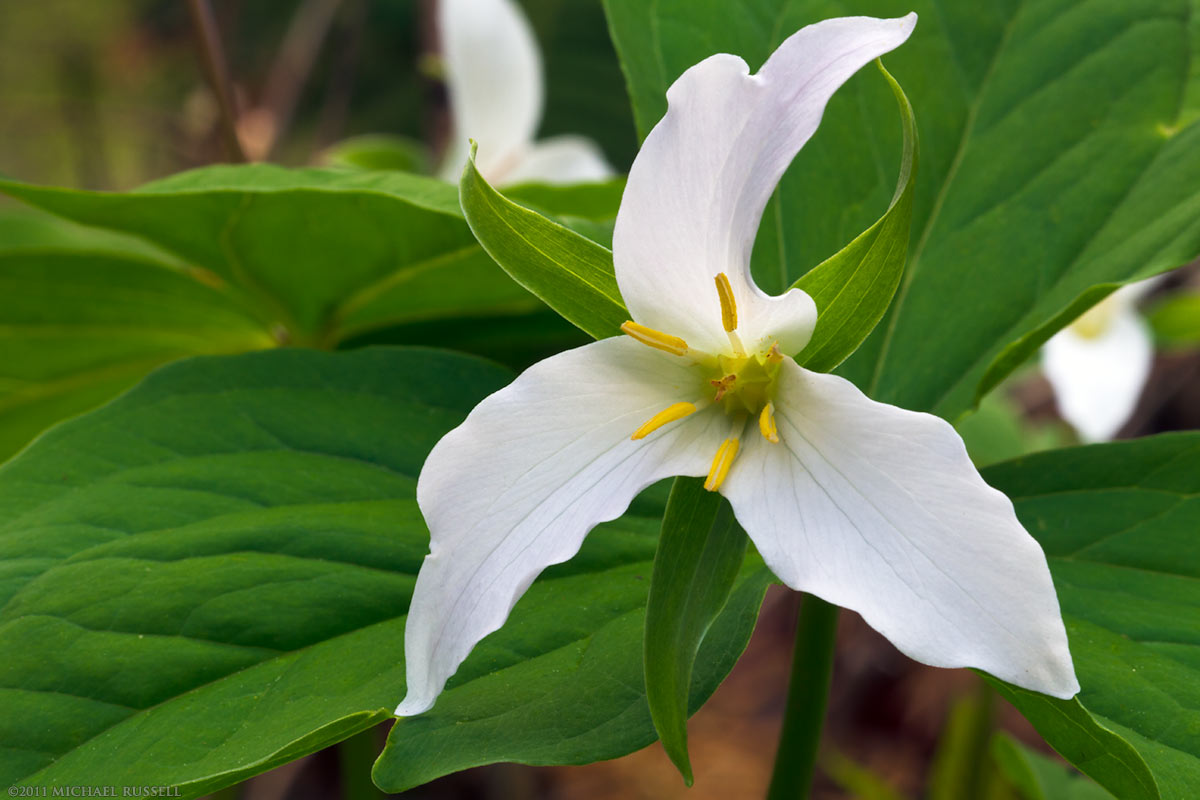 The Western Trillium is considered a Species at Risk (Yellow Listed) in the Fraser Valley due to habitat fragmentation. (Purchase)

Last night the weather was good so I ventured down to Campbell Valley Park to see what I could find in terms of wildlife and wildflowers. A whole lot of both as it turns out. While I was setting up this shot of a Western Trillium (Trillium ovatum (link)) a Spotted Towhee (Pipilo maculatus) decided to land on my camera. I have spent hours in the past trying to get a shot of these guys in my backyard, but they enjoy hiding in the underbrush and are not very interested in people being near them. This one, however, didn’t seem to think of me as a threat – at least up to the point where I couldn’t keep my mouth shut and said “are you kidding me” out loud. I guess I was surprised. The Towhee was not amused and fled.

Trillium aren’t as skittish so I was able to get this shot with my macro lens. A lot of wildflowers are just about to bloom in the park, so I will be returning there shortly to try to get some more photos.