As with many of my better images these photos of a view of Vancouver were not really planned. I had a plan, but when that fell through (as they often do) I had to adjust (more on that later). This is the view of Vancouver from the Burnaby Mountain Conservation Area near Simon Fraser University. I’ve been surprised both times I’ve photographed here that I have not seen other photographers (beyond those with cell phones) as the view is quite popular. When I went to school at SFU this was a busy area at sunset as people parked their cars to watch (and do other things) – and this was much the same last week when I was on Burnaby Mountain. Two separate people were even brought by their drivers, and had their own security. Why this area is popular is understandable as the view is spectacular on a nice day!

The panorama above shows many notable buildings and locations in and around Vancouver (best viewed in the larger “lightbox” version if you click on the smaller version above). On the left the blue lights are from BC Place and above the stadium you can see Mount Arrowsmith on Vancouver Island. Then we have the towers of the downtown area of the City of Vancouver and the Port of Vancouver structures next to Burrard Inlet. Beyond Vancouver you can see other areas of Vancouver Island (including the light of Nanaimo), and ships waiting to load/unload in English Bay. The darker area before you get to the Lions Gate Bridge is Stanley Park, and then you have the bridge itself, and the lights of the City of North Vancouver and the District of North Vancouver. In the foreground you have Capitol Hill in north Burnaby (I can see the house I lived in for a few years in this photo), and then the Burnaby Refinery (Parkland) next to Burrard Inlet. 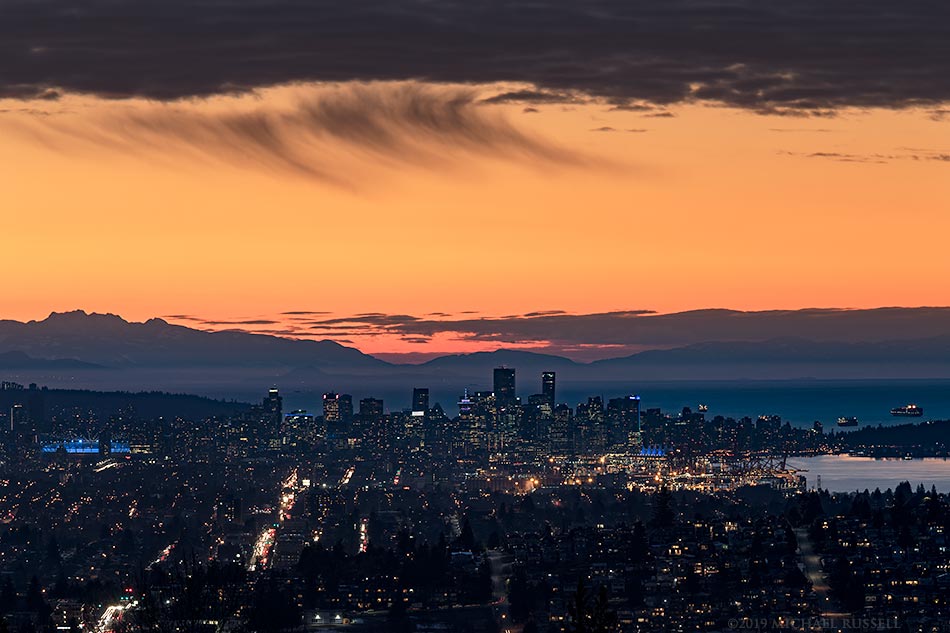 View of Vancouver from Burnaby Mountain after sunset. (Purchase)

I had initially planned to photograph a few scenes in Port Moody (which I was able to do) and then photograph some blue hour photos of snow on the mountains to the north (Mount Seymour, etc). I didn’t expect a sunset due to cloud cover and I have had a few ideas for those photos for a few years. It became immediately clear that there was not a lot of snow on the mountains (visible) and that plan was going to have to be abandoned.

When I was editing these photos I was reflecting whether these images would have been possible for me to make maybe even 5 years ago. My camera at the time would have done a good job, but I’m not sure I’d have been able to get in the right position and more importantly, the right frame of mind, to make these photos. I used to over plan my photography days, and if I’d shown up here to make blue hour photos of mountains covered in snow (and not found those scenes) I might have still been stewing on this and unable to make the transition to shooting something else. You just can only shoot what is actually there, and even if that thing isn’t what you initially wanted or expected, there is almost always something else to photograph. Knowing more about what locations are nearby and what potential they have also helps! Even if you photograph nothing at a location, seeing what might be possible there in the future can help a lot.

For more of my photographs of Vancouver visit my Vancouver Gallery.