A Barred Owl (Strix varia) looks down from its perch in a backyard forest in the Fraser Valley of British Columbia, Canada. 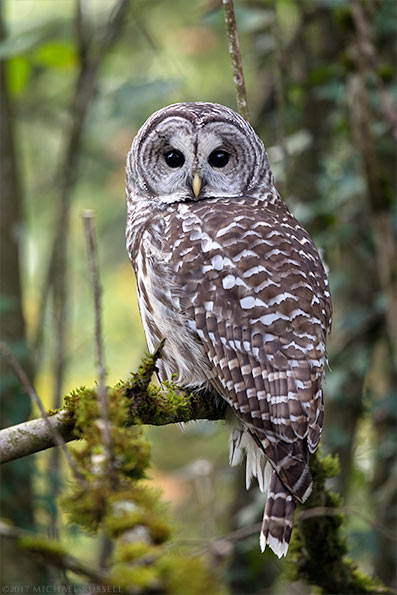 I have described myself before here as a “wildlife opportunist” in that I seldom seek out animals to photograph, but happily do so when they are nearby – as was the case with this Barred Owl a few days ago. I came home from some grocery shopping and decided to check out why the Northwestern Crows (Corvus caurinus) and Steller’s Jays (Perisoreus canadensis) were going a bit nuts in the forest next to my house, and found they were harassing a Barred Owl. I immediately went inside and grabbed my camera. As with any wildlife encounter, my camera had the widest angle lens on it at the time, so I had to switch to my 70-200, replace the battery, and put in a new memory card. Luckily the Barred Owl was still in the trees when I returned. The crows and jays seemed more worried about my presence than they were motivated to harass the owl, so they moved on pretty quickly. I made a few photographs of the owl but as usual with the owls I see, there were plenty of branches and leaves in the way. I did what I could, but then another bird species actually helped me out – an Annas Hummingbird (Calypte anna). 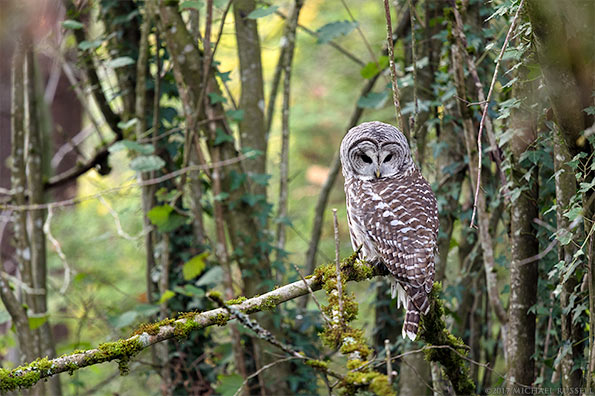 Hummingbirds can be quite aggressive and territorial, and this one was living up to that reputation. A group of hummingbirds is called a “troubling” which makes sense in this context. Another name – a “charm” of hummingbirds doesn’t seem quite as relevant. This summer I saw a Bald Eagle fly over the house – without the usual assortment of crows etc harassing it. What was after the eagle was a small swarm of Hummingbirds orbiting it like angry wasps. The Hummingbird in this case would strafe the owl, hover, move off, and then repeat. Occasionally it would perch nearby before continuing the harassment campaign. What worked out in my favor was that the Hummingbird actually ran into the back of the owls head at one point, and so the owl moved to a different location about 20 feet away. Also lucky for me was that this actually put the Barred Owl in a better position for me to photograph it without (as many) distracting branches and leaves in the frame.

When I photograph wildlife I try to make sure I am not disturbing their normal behaviour as much as possible. This owl seemed much more interested in what was happening on the ground below it with the occasional glance at me or to track the latest strafe from the Hummingbird. This was maybe an hour before sunset so perhaps it was starting to think about hunting. I’ve found a few owl pellets on the ground near here this fall, and found a number last winter, so there is a chance I’ll see this individual again. 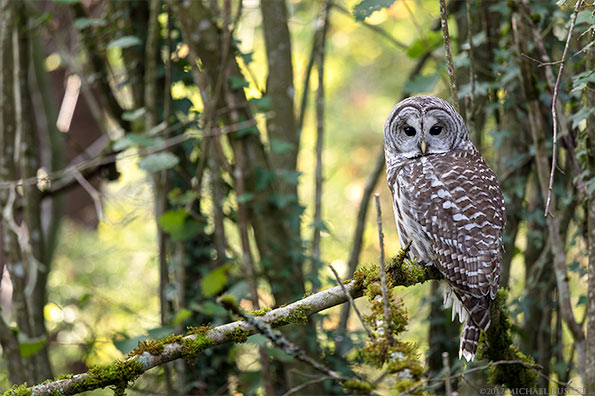 For more photographs of owls and other birds visit my Bird Gallery. 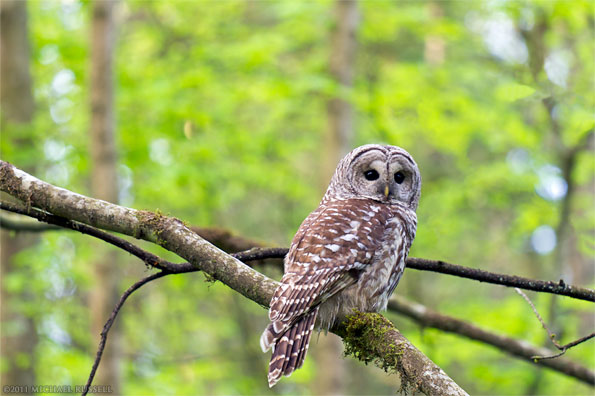