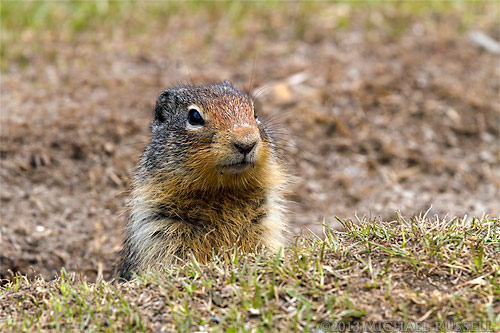 I had initially figured these to be fairly wild, but unfortunately they seemed pretty unafraid of me. This was near a campground so it seems that some people have been misbehaving and feeding the wildlife. Not surprising, but disappointing. I didn’t really realize how “tame” they were until I was crouched down photographing something else and one jumped into my open camera bag likely to try to raid it for snacks. They came up empty but I suppose it pays to be bold, especially when you are literally about 1 foot away from the safety of your burrow!

I had considered posting the photo below with only frame 2 or 4 showing the ground squirrel on its back… but that could be misconstrued as a dead squirrel. This guy scratched his back like this many times, and while I had the presence of mind to photograph it, I again forgot about the video capabilities of my Canon 7D. Ooops!

This image sequence does show what he was doing though – and he’d kick his back legs like I’ve seen dogs do while scratching their backs in the same manner. It is a technique that must work!

The fervent back scratching was soon followed by the collection of some mouthfuls of grass presumably for nesting materials. I’d woken up to the video potential at that point, and managed to record this video. I really would like to get better at recording video but usually these things come up so quickly I’m not fully prepared – and have to shoot handheld. A frequent issue is that if I am using my Canon EF 70-200mm f/4L IS USM Zoom Lens with the image stabilization turned on, the sound it makes to steady the image is evident in the audio track (as is the case here). Also, if there is any breeze at all it sounds like I am blowing directly on the mic at all times. I guess this is why there is a jack for an external microphone on the 7D. Someday I may pick up one of these, but I’ll have to practice making video for a while before that is something I consider. As I shoot still photography exclusively in RAW format, I’m used to being able to tweak whatever I like after the fact. I find the video straight from the 7D to show somewhat flat colour and lack a bit of contrast. This would be easily remedied in a basic video editor I presume, but I’ve not had much luck with Quicktime Pro which about the only software I own for such purposes. The color edits don’t seem to stick with the exported movies.

Do you record video with your DLSR? What do you use to edit the results?