Panorama of Vancouver and Coal Harbour from Stanley Park (Purchase)

During my last trip to Vancouver’s Stanley Park in October I photographed a few places I had been before from new perspectives. After having visited the Air Force Garden of Remembrance for the second time I headed to the west end of Coal Harbour. I have photographed some of the buildings of Vancouver’s West End before, but most often from further into Stanley Park near the Totem poles or the 9’oclock Gun. The first panorama here shows a very wide view of what you can see of Vancouver from the end of Coal Harbour. On the left you can see the boat houses of the Royal Vancouver Yacht Club (and the cranes of Port Vancouver behind them), Canada Place and the Trade and Convention Center, the buildings of downtown Vancouver, and finally Devonian Harbour Park and the apartment and condo towers in the West End.

The second photograph shows one of the views in Stanley Park from the seawall looking towards downtown Vancouver. These boats are moored at the Vancouver Rowing Club – a building familiar to most as it sits at the entrance of Stanley Park next to Georgia Street.

Finally we have the photograph below looking towards the West End condo towers from the seawall next to the Vancouver Rowing Club. 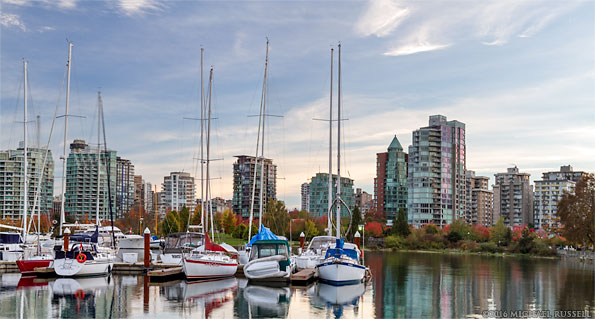