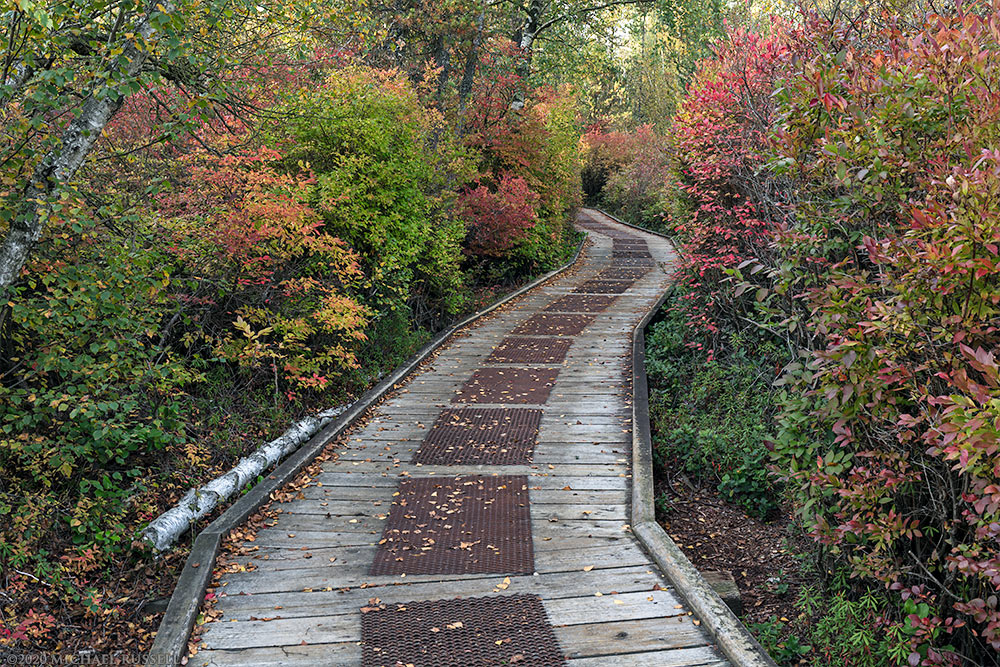 While pondering locations to find and photograph fall foliage last autumn I visited a number of locations that were new to me, and Richmond Nature Park was among them. Fall foliage was rather hit and miss last year, and I thought that perhaps a raised bog ecosystem might offer some birch and blueberry foliage that would be a bit different than the usual Maples etc. Having no experience with Richmond Nature Park I didn’t know which trails to take, and opted for The Time Trail and Bog Forest Trail that looped around the edge of the park, mostly. Some parts of the Bog Forest Trail are raised on a wooden boardwalk as you see above. This first photograph also shows how the Salal (Gaultheria shallon) and Blueberry Bushes (Vaccinium sp.) make walking parts of these trails a bit like a journey through a colourful tunnel, with some wildlife mixed in a long the way. 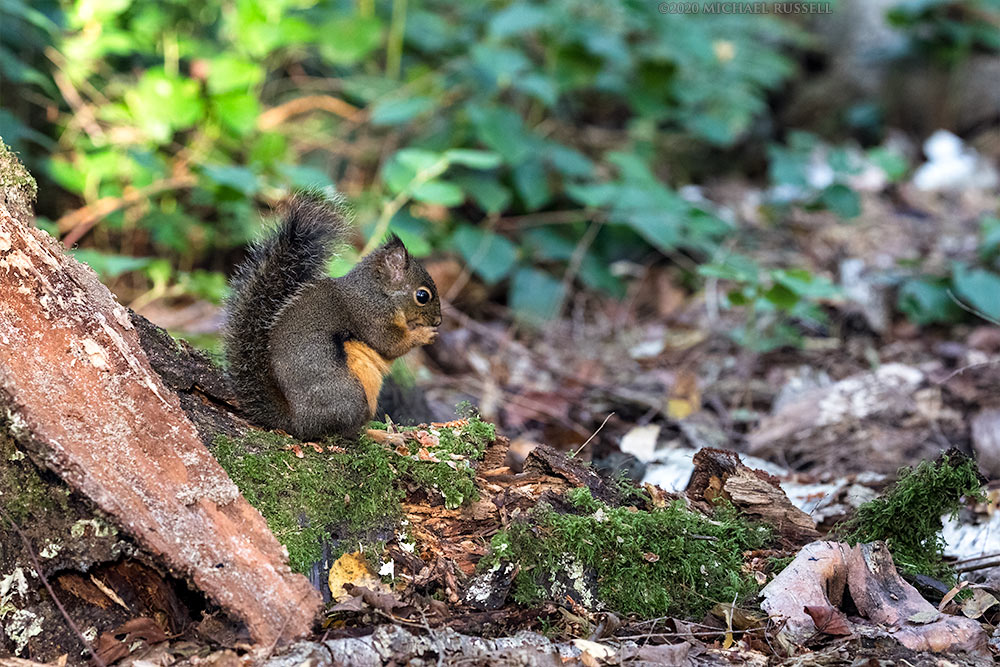 The Time Trail was the first trail I walked in the park and went through a portion of forest without much bog species evident. I photographed this Douglas Squirrel (Tamiasciurus douglasii) eating tree seeds in what was a popular feeding spot. I counted over 6 Douglas Squirrels in the same area at once which was nice to see as they are frequently pushed out by the larger, invasive Eastern Grey Squirrels. Seeds of coniferous trees such as the Douglas Fir (which were common along this part of the trail) are a large part of the Douglas Squirrel’s diet as well as occasional berries and mushrooms. There was some squabbling over the food in this location but it was relatively civilized banquet overall. 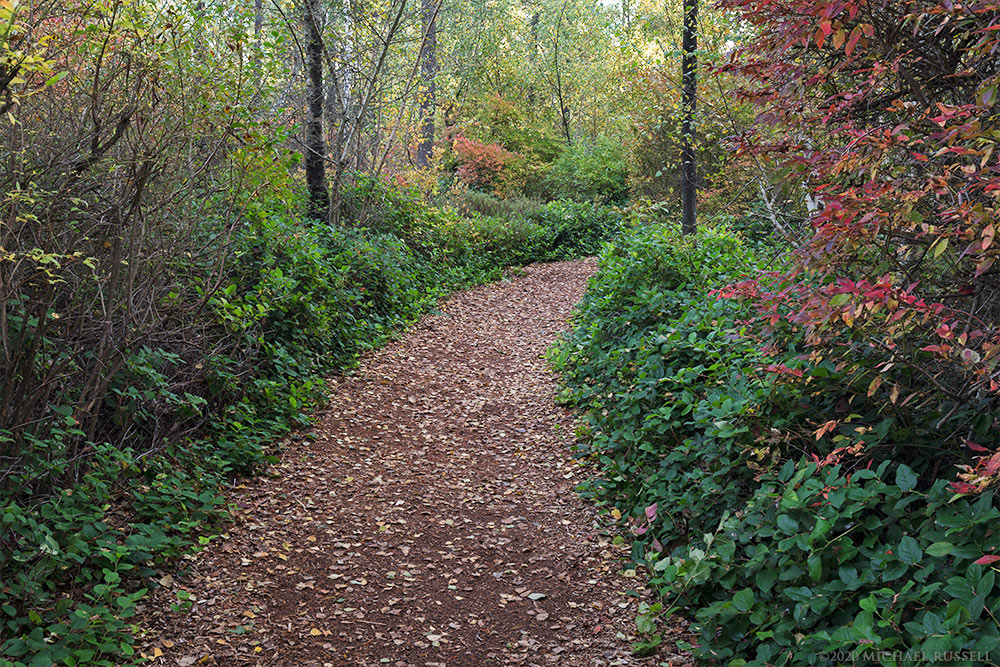 The photograph above shows the Bog Forest Trail on the western side of Richmond Nature Park with a few more open areas giving views of Birch and other tree species. There is also more Salal in these areas, giving a nice green edge to the trail. 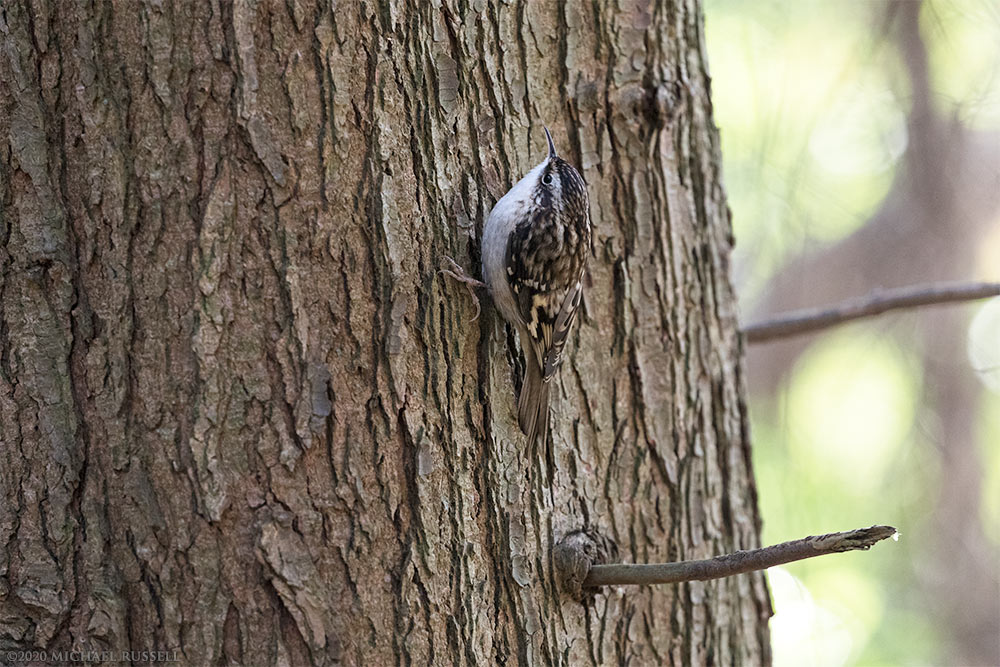 Immediately after I photographed the squirrel above I saw this Brown Creeper (Certhia americana) looking for insects and arthropods up and down the tree trunks along the Time Trail. I’ve read about Brown Creepers before, but never had seen one (they are well camouflaged against the tree bark). They don’t show up in the forest like a lot of the other birds I see often – they are climbing up tree trunks for the most part, searching for insects in the bark. Once I saw how this Creeper behaved, I moved a few trees ahead of where it was, and it eventually worked its way up the tree in front of me, and I was able to make this photo. They remind me a bit of trying to photograph Nuthatches – they never seem to sit still and are always on the move up each tree.

You can see more of my photos from Richmond Nature Park and the City of Richmond in my Richmond Gallery.