View of the Golden Ears, Raven Peak and Osprey Mountain (left) and the Pitt River from the Traboulay Poco Trail in Port Coquitlam, British Columbia, Canada.

The Pitt River, Osprey Mountain, and the Golden Ears (Purchase)

It is relatively warm and spring-like now, but a few months ago I was still looking for winter photographs in my area of British Columbia. The Golden Ears (Mount Blandshard) are one of the nearest mountain views that I can reach from where I live, and so they are a frequent subject of mine. I have photographed them from many locations but hadn’t done so from the Port Coquitlam perspective, so I drove out to the Traboulay PoCo Trail in February to photograph the Golden Ears and the Pitt River. 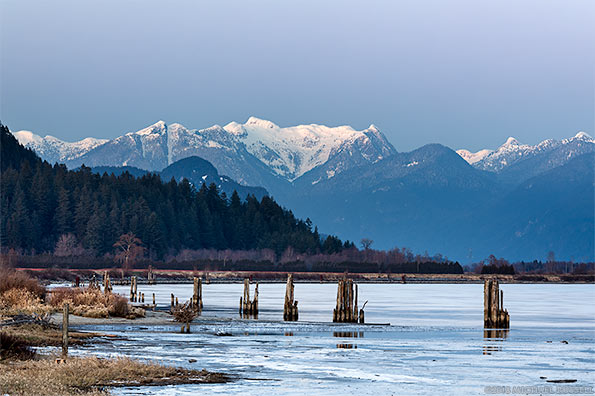 While the Traboulay PoCo Trail encircles Port Coquitlam entirely, I parked at the Prairie Avenue parking area and walked just the short distance between there and the DeBouville Slough. This gave me the great view (first photograph above) of the Golden Ears, the Pitt River and a few surrounding mountain peaks. I also made a few other photographs in this area, including this one of Osprey Mountain with some nice “belt of venus” sky coloration. This was not a view I’d anticipated, but that is hard to do in a location you’ve never visited. Some times trip planning on Google Earth etc is very useful, but it is never as useful as actually visiting a location.

The last photograph here is a nice post sunset view – alpenglow on Mount Baker. The river in the foreground is the Pitt River in a spot near the DeBoville Slough while Mount Baker itself is in Washington State. I also made a photograph of Baker a bit earlier in the evening with what I would call “sunset light” on Mount Baker. 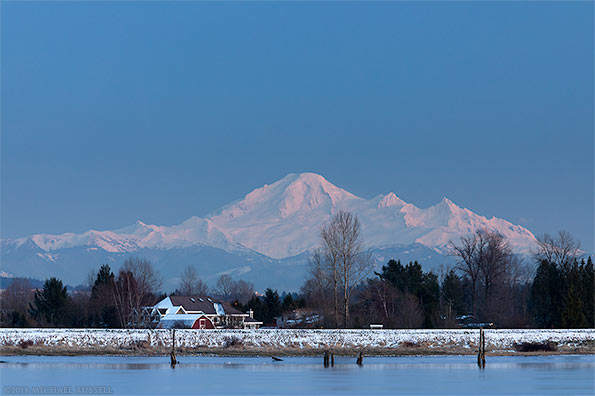 Alpenglow on Mount Baker from the Pitt River (Purchase)

Not to wade to far into what is often a contentious discussion over the definition of alpenglow, but the photo above is exactly what I’d call alpenglow. The definition of alpenglow is that the light has to be indirect, so it is usually reflecting off of clouds or the atmosphere in some way. Sunset light can create a great glow, but is still direct light. So the photo I linked to above would be “sunset light” and the photo shown above is “alpenglow”. I see a lot of photographs where direct light is labelled as alpenglow. Alpenglow is great light, subtle, and is harder to find than good sunset light. Quite often it just doesn’t materialize when I am looking for it. I think this might be why actual alpenglow is a bit coveted, and why some want to move the definition towards something easier to obtain such as the direct sunset light. I do wish I saw light like this more often!

A few more shots from Lake Minnekhada Regional Park in Port Coquitlam, BC. Here is the trail map if you are interested.

A few panorama shots from Lake Minnekhada Regional Park in Port Coquitlam, BC.