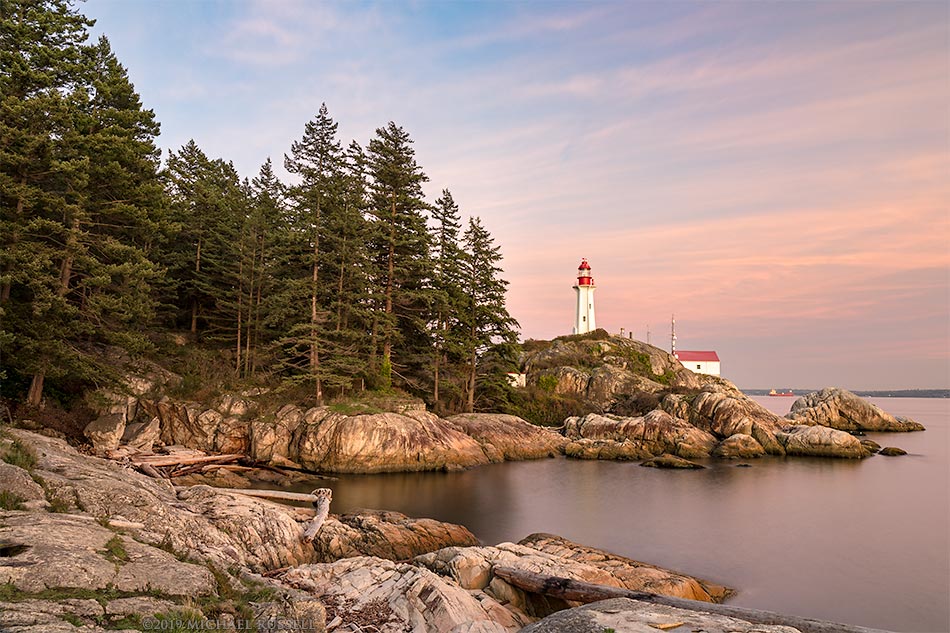 Recently I posted a photograph of the Point Atkinson Lighthouse in Lighthouse Park to Twitter and realized it had been probably 8 years since I’d been there. A few days later I drove out to the park on an initially clear day that was later infiltrated by a lot of high cloud. The glare from this kind of light is one of my least favourite light conditions, but I decided I was going to explore a number of trails I was unfamiliar with in the park regardless.

First I went to Juniper Point. From there I followed the Shore Pine Trail to Shore Pine Point. The Beacon Lane Trail is a direct route to Lighthouse from the parking lot but it is wide and easy to walk compared to some other trails in the park. Those familiar only with the Beacon Lane Trail would be well advised to pick better footwear and clothing for the Juniper Point and Shore Pine trails as they often resemble walking down a steep creek bed. Rocks, rocks, and more rocks. It isn’t difficult, but it isn’t something to attempt in sandals either. Both Juniper Point and Shore Pine Point offer nice views to the south and west of Lighthouse Park. Views of Bowen Island, the Salish Sea, and even to Vancouver Island can be found here. The trails on this side of the park can be narrow, but also offer nice views of old grown Douglas Fir trees, and there are plenty of Salal (Gaultheria shallon) and various fern species to give the location that temperate rain forest feeling. 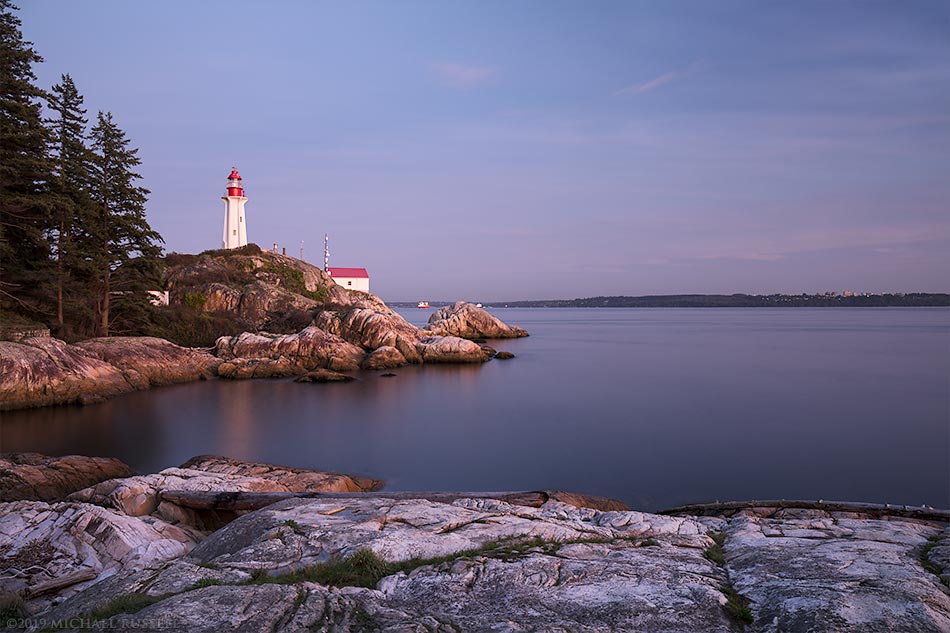 From Shore Pine Point I went down to the main viewpoint for the Point Atkinson Lighthouse – which is rather overgrown now and shows mostly the top of the Lighthouse. This wasn’t the view I was looking for so I went to West Beach via the West Beach Trail. This is one of the classic views of the lighthouse, but it also gives good views of passing boats and any sunset that may occur. I was fortunate that the high cloud I disliked earlier in the day stuck around, but the sky opened up a bit to the west creating a nice sunset. I tend to photograph most sunsets while facing east as I prefer the subtle colors in the eastern sky to the bombast of the sunset to the west. The light from the sunset itself is great for objects found to the east – with a nice warm glow often contrasting with a more purple/blue tint to the clouds in that direction. The first photograph in this post shows a nice glow on the rocks and a still orange light in the clouds to the east. The second photograph above shows the light as it was only 12 minutes later. A much more subtle glow on the rocks and the lighthouse with a very blue/purple tint to the clouds. A third version of this lighthouse at sunset shows both the warm glow on the rocks and purple hues in the sky. 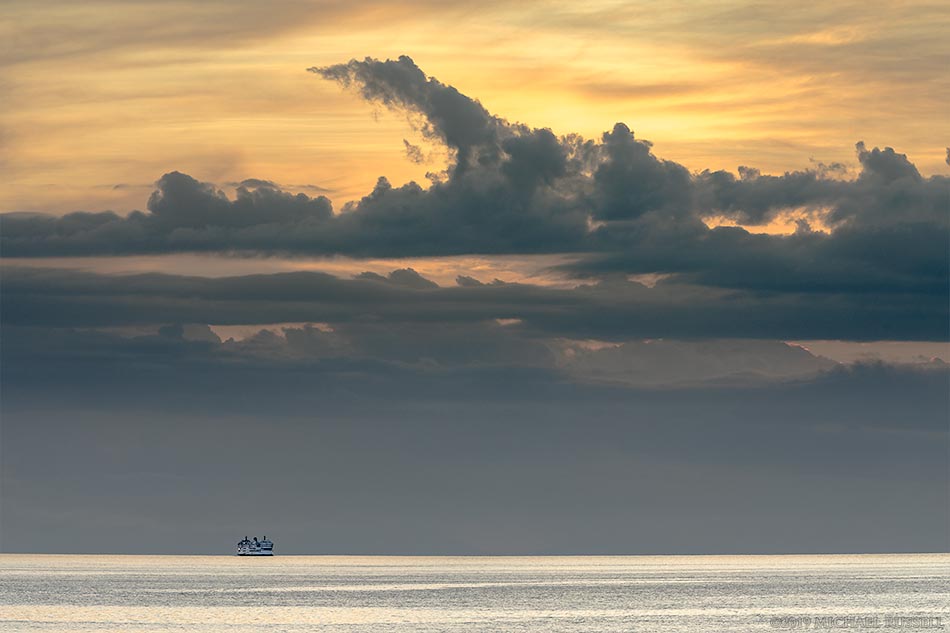 As with my last trip to Lighthouse Park where I visited Juniper Point, I had a goal of what to photograph but my favourite from the day is probably not one of the expected subjects. At Juniper Point I photographed this sailboat while waiting for the right light for other subjects. On this latest trip to Lighthouse Park I liked the shape of the clouds with some not overly brash sunset colours but likely wouldn’t have made the image without the ferry being present. The Queen of Oak Bay (built in 1981) was kind enough to sail into the scene returning to West Vancouver (Horseshoe Bay) from Nanaimo on Vancouver Island. While these are interesting clouds – without the ferry (or something else) present this wouldn’t be a photo that I’d share.

For more of my photographs of Lighthouse Park visit my West Vancouver Gallery in the Image Library. 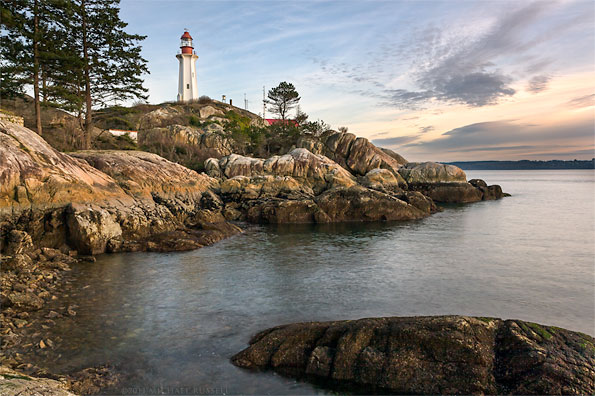 I have reprocessed this photograph with new editing techniques and a few things I’ve learned since this post. Follow the link here to see the new version of this Point Atkinson Lighthouse photo.

This photo of the Point Atkinson Lighthouse was not what I pictured in my mind when I headed to Lighthouse Park. I had not been in Lighthouse Park in West Vancouver for any length of time since about 1996, so I was a bit rusty in terms of good photo locations. I quite like this spot though, and there may be better in the park I just haven’t investigated it thoroughly enough yet. However, I did envision an decent sunset, which did not occur. A band of clouds over Vancouver Island came in and obscured the direct sunlight. I find this version appealing but I think the sky will offer something more dramatic if I keep checking this spot out.