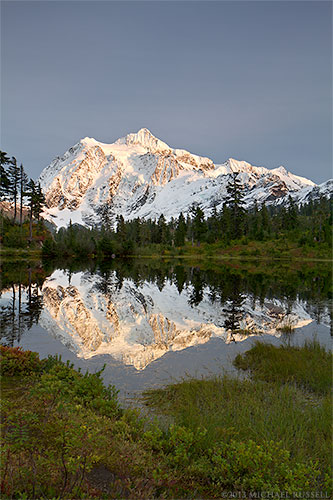 This is one of my newly processed photos from Picture Lake in the Mount Baker-Snoqualmie National Forest – featuring the iconic Mount Shuksan. In October 2011 I again photographed this location and now that I have my website gallery organized I have finished off the processing of images from that trip. This photo (and the horizontal version) has a bit of a different look to it than the others I processed from the same evening.

More photos of Mount Shuksan and the surrounding area can be found in my Mount Baker-Snoqualmie National Forest Gallery. 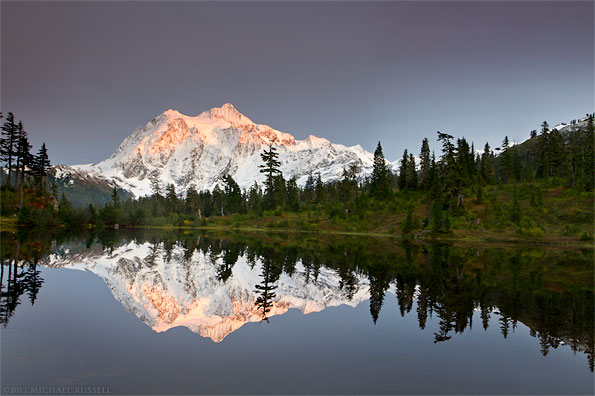 A few weeks ago I had the pleasure of doing some hiking and photography in the Heather Meadows area of the Mount Baker Wilderness with Alan Majchrowicz. We hiked to the top of Herman Saddle along the Chain Lakes Trail which had a fantastic view. Clearly I had been riding my office chair for too long because my lungs didn’t quite handle the hike as well as I had hoped. Most of my familiarity was with the Picture Lake and Artist Point areas so to see a few of the other sights was an eye opener. I know a few hikes I want to do next summer!

Back at our vehicles we were talking a bit about how the “good” light can come and go rather quickly. I know I’ve seen the light turn to something fantastic as I am in my car driving away from my recent shooting location. I have also seen it disappear as I am trying to reach a viewpoint. I have learned through some recent experiences that staying until the light is definitely gone is always a good idea. You never know what might develop after you leave! So it was not without a touch of irony that this conversation ended quickly as we noticed great light appearing on the mountains. A quick drive and a hurried jog up the boardwalk later and I made these images of Mount Shuksan.

Photography for me is usually a very relaxing endeavor, which is part of my enjoyment of it I think, but sometimes when you know the light will go at any moment this can be accompanied by some adrenaline. Years ago when this would happen I would rush and make a lot of mistakes because of the urgency, which does not happen now. I still feel the excitement though! I have been at this location many times, but I have not seen good light on the mountain while it had this backdrop of a subtle purple/mauve cloud coloration. It was colorful enough to give a nice contrast with the snow and ice of the mountain, unlike a simple grey cloud background (which I have seen many times).

I am often a bit torn at this location between trying to get foreground detail or just creating a silhouette of the foreground trees. I think this silhouette version was quite successful but I also like the other version. Which do you prefer?

EDIT (November 2013) – Having had 2 years to think about it I now much prefer the first image over the silhouette. I may even prefer a variation on that image ( Mount Shuksan ) over the version posted here.

A few “leftovers” from my trip to Mt. Baker back in October. I like these shots but never found the will to make dedicated posts about them. So here they are.

First I have always liked the angle of the Hwy 20 near Artist Point from this vantage point. The short hike to Huntoon Point from Artist Point has a few small tarns but I think this was a bit late in the year to have them full and capable of reflecting more of Mount Shuksan.

Another angle from the shots I took at Picture Lake taken during my last fall trip. I have taken many shots of this (and similar) spots but haven’t quite settled on being “done” with the area. Regardless, its close to home and I always have a good time shooting up there. Even more so during the few months of the year that Artist Point is open.

I have previously photographed Mt. Shuksan and Picture Lake but last Wednesday I was fortunate enough to have a near perfect reflection in the lake. No wind, no breeze, no monsoon. I knew that Mt. Shuksan was one of the most photographed mountains in the world, but even still I did not anticipate a lineup for various favoured viewing spots. Lots of photographers to talk to is nice though, ignoring the one guy who was pointing out to all the Canon users that he shot Nikon and was therefore in some manner superior.

Mt. Shuksan and a still frozen Picture Lake. Almost exactly a year ago I in much the same location but the ice was off the lake already and there was little snow around. This year there is still much snow, the trail around Picture Lake is not accessible, and I bet I will have to wait until at least late July before getting up to Artist Point.

I have taken a lot of pictures of Mt. Shuksan at Picture Lake near Mt. Baker. I am still looking for that shot that tells me I don’t have to keep shooting it. Now that I have my foot in the door on a real neutral grad, I expect my shots will get better and I won’t have to try to apply a fake ND in post. One more tool in my bag that makes me think about retaking shots I’ve taken many times already.