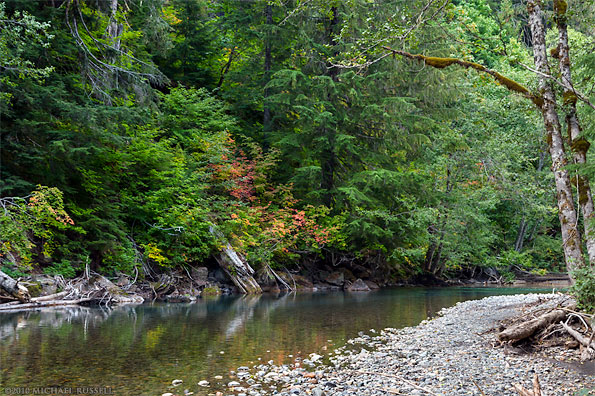 I first photographed this scene at the Ohanapecosh River in Mount Rainier National Park in the fall of 2009. This spot is right next to the small suspension bridge that crosses the Ohanapecosh River on the trail to the Grove of the Patriarchs. I liked the fall foliage colors of these Vine Maple (Acer circinatum trees along the blue waters of the river. I have visited this spot a few times since during the fall and have either been there when the leaves are still green, or after they have turned brown and begun to fall off – but it is always a nice spot to eat lunch. I’d love to photograph this scene again with a fuller extent of oranges and reds in the foliage, but that will be a matter of getting my timing right. Now that I’ve discovered what the park is like when the wildflowers are in full bloom which is usually in August, exploring Rainier for fall foliage colours may have to wait a few more years.

For more photographs of this area including other versions of this scene please visit my Mount Rainier National Park Gallery in the Image Library.

Both of these photos were made at Silver Falls on the Ohanapecosh River in Mount Rainier National Park this past August.

Over the years I have often avoided having people in any of my photos. After all – I am usually there to photograph nature, not a bunch of people! Often in busy locations there was some waiting while the other visitors walked out of my composition. Now, however, I tend to include those people in a photograph for a few reasons (and then photograph it again when they’ve left). First, I may potentially like the composition more with the people than without later when I edit my photos. Secondly, certain locations don’t show the scale of the scene very well, and including people can give the view a better sense of overall size.

I had viewed other photographer’s photos of Silver Falls before my late Summer trip to Mount Rainier, but really didn’t understand how large the falls actually was. The vertical photo at the top of this post is not only more interesting because of the hiker standing there looking at the Falls, his presence helps show you how large the rocks and surrounding area really are. I am not sure that could be accomplished without him in the composition. The second photo here I like a lot – but I do think the scale could be shown a bit better had that hiker still been there!

In my previous post I showed a few images of people enjoying the wildflowers at Tipsoo Lake (also in Mount Rainier National Park) – and I think the people there help the photos a lot as well, though for different reasons than above.

The Ohanapecosh River next to the bridge to the Grove of the Patriarchs.

In 2006 Mt. Rainier National Park received 18 inches (45cm) of rain in 36 hours. Flooding damaged roads, infrastructure and changed the course of rivers. A 5000 ft (1524 meters) landslide below Stevens Canyon Road dumped into the Ohanapecosh River near the Ohanapecosh Campground.

I would not have wanted to be here when this came down.

At long last I have been going through and processing the photos from my 2nd trip to Mt. Rainier National Park in September of 2009.

Bridge over the Ohanapecosh River on the trail to the Grove of the Patriarchs, Mt. Rainier National Park.