Recently the mountains of the Fraser Valley had a good snowfall so I headed out there to see what I could photograph. I parked myself next to the Chilliwack River for an hour or so and having failed to entirely freeze at that location I moved once again on towards Chilliwack Lake.

I had to park outside of the gates again as Chilliwack Lake Provincial Park is closed this time of year. The walk in was much uglier than last time – no tire treads to walk in on. I followed some tracks left by a (much smarter and prepared) person with snowshoes. As I took each uneven, slippery step I vowed to never do this again wearing only trail running shoes and jeans in a cold -10°C (14°F) with a windchill estimated at about -20°C (-4°F). A good parka and toque don’t really make up for freezing the lower half of ones body. So despite freezing and stumbling I did manage to get there in time to catch some of the last light on Mount Redoubt/Nodoubt Peak. A more interesting shot than last time – with clouds swirling around the peaks and a great alpenglow.

Some fall color at Chilliwack Lake. The mountain at the end of the lake is Mt Redoubt, but is actually in North Cascades National Park in Washington State. 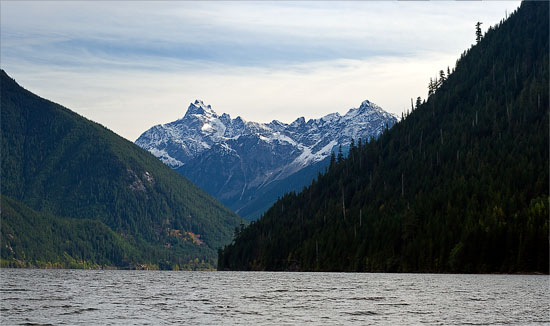