Moonrise over the North Cascades from Mt. Erie Park (Purchase)

In September I went on a day trip across the border into Blaine, Washington and eventually ended up at Mt. Erie Park in Anacortes on Fidalgo Island. The plan had been to follow the coast and hit a lot of different spots on the way to Fidalgo Island and Anacortes with Mt. Erie Park being the last destination. It turned out this was a bit overly ambitions so when I arrived in Anacortes it was already early evening. I’ve learned from experience that when time gets short to have a plan for the final destination in place, and so after visiting Anacortes I drove up the narrow road to the top of Mt. Erie. This was a park that seemed like it had a decent chance at good views – and they turned out to be great views. This first panorama photograph here shows several peaks I photographed from the park – mainly (from L to R) Round Mountain, Mount Higgins, Glacier Peak, White Chuck Mountain, Whitehorse Mountain Three Fingers, and Liberty Mountain. 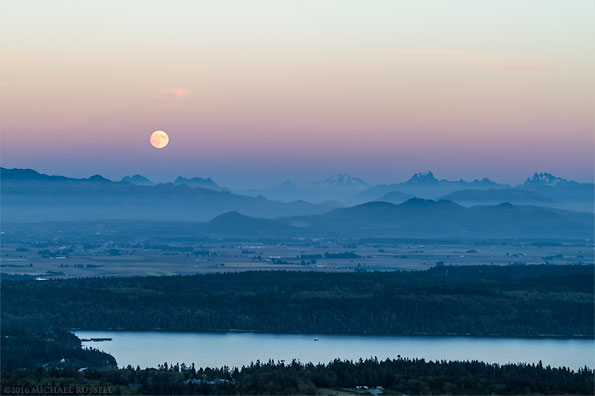 Moonrise over the North Cascades and Similk Bay from Mt. Erie (Purchase)

I’d like to say I had planned my timing with this moon rise perfectly, but it was just a pleasant surprise. Many photographers determine sunrise and sunset paths before photographing an area but I don’t often do this – especially on a relatively unplanned day such as this one. There are plenty of great views from the top of Mount Erie – from Mount Baker and a number of other notable peaks in the North Cascades to the view south towards Whidbey Island, The Olympic Mountains and the Straight of Juan de Fuca. The three photos here show the view to the east and southeast of the North Cascades, and the farmland on the mainland. 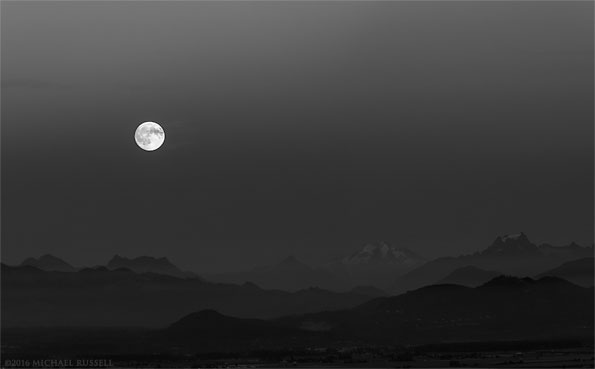 Moonrise over the North Cascades in B&W (Purchase)

I thought I’d try this last photograph in Black and White, and I think it works (more so with the enlarged view compared to this thumbnail). You can view the colour version for comparison. The peaks in this photograph include (L to R) Round Mountain, Mount Higgins, Skadulgwas Peak, White Chuck Mountain, Glacier Peak, Disappointment Peak and Whitehorse Mountain. 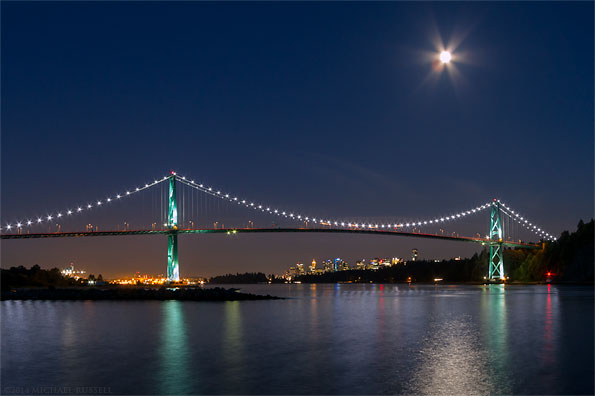 When I photograph a location in the evening I sometimes will look up where the sun is going down, and where the moon may be rising (or its general location). As I had no plans to photograph in the evening on this day, and instead to photograph and hike in Seymour Provincial Park – I skipped that part of my usual preparation. Naturally I found myself at Ambleside Beach in North Vancouver photographing the Lions Gate Bridge and surrounding areas at sunset. During blue hour the moon was very bright in the sky. After a few compositions trying to ignore it I found the reflections without a known source looked rather odd. This composition included the moon so the reflection on the water made some sense.

A week ago I was excited to find out there was a full lunar eclipse occurring on December 21st. I had tried to photograph the last one I was able to see near Vancouver, BC years ago. Unfortunately that attempt was with a shaky tripod and a “kit lens quality” 300mm zoom lens. The results were not that good at all. I am much better prepared now.

As I had no expectation of the lifting of the cloud cover this morning I did not do much preparation of my equipment. When I set out to shoot somewhere I have learned (through “experience” ) to check my batteries, memory cards etc. Tonight I did no such due diligence.

I thought well, heck, there might be a break in the clouds. I went outside and caught a perfect break in the clouds and there was the moon loud and clear. I went back inside and quickly grabbed my tripod and camera. Rushed outside and the moon was gone – I could barely see a faint bright spot in the sky where it had been. Again I gave up hope. An hour later the clouds miraculously parted and I tried again. After two test exposures the battery died. I grabbed a spare. One more exposure and my memory card was full, so there was a few more minutes wasted getting a fresh one.

There I was – finally all set and…. the moon again disappeared behind the clouds.

My test shot probably could be outdone by most people with an iPhone lol.

So when is the next eclipse? I’ll be prepared next time. I promise!