In early December 2013 British Columbia had a cold snap. This isn’t unusual in winter, but came a bit earlier and slightly more severe than usual. On the day I headed to Silver Lake Provincial Park with Steve Cole the temperatures in the area were around -12°C (10°F) ignoring the windchill. I hadn’t really considered the possibility of seeing the lake frozen over, but Silver Lake was covered in ice. Unlike a few nights of winter photography I enjoyed a few years ago at Chilliwack Lake – I was properly dressed this time. One tends to learn a lesson after 4 hours in such weather wearing jeans and tennis shoes. Well, hopefully. 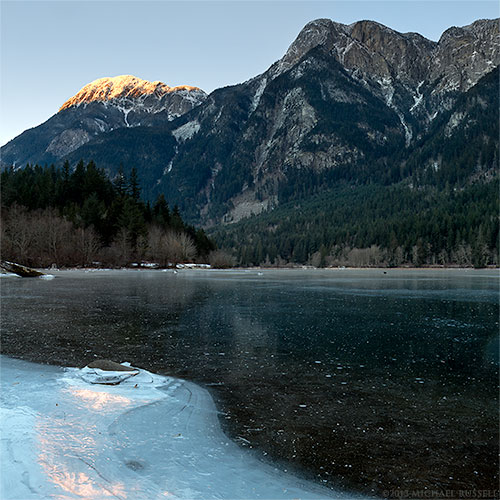 At some point during our photography along the edge of Silver Lake some “hunters” stopped on the opposite side and starting shooting into the lake. I presume this was an exercise in shooting the ice trying to break it or determine its thickness. Or perhaps some people just like shooting guns. I didn’t think to much of this until I started throwing rocks onto the ice (after we were finished photographing) to see how far they would go. I guess I revert to being 5 when around a frozen lake, as it doesn’t happen often. Rocks on frozen lakes can travel quite far apparently, which made me think about whether a bullet could skip/slide across a lake. We decided to walk aback through the woods rather than along the lake shore for this reason. I had no desire to catch a bullet from idiots trying to kill some frozen water.

When we got back to Steve’s truck I was momentarily alarmed as I didn’t spot it right away – and there was a truck driving away down the road. Turns out his truck was there, but I didn’t like the momentary thought that we could be stuck this far from anywhere without a vehicle. There was one car and another truck parked outside the main park gate when we left. 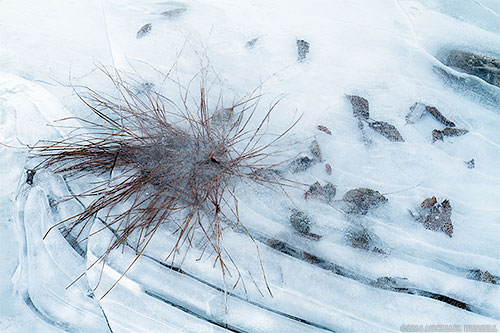 Driving down the short road to the junction with Silver Skagit Road took just a few minutes. It was not a nice feeling to discover that the gate at the Silver Skagit Road and park road junction was LOCKED! We got out, and sure enough – there was a nice padlock sticking up freshly applied to the chain and metal post. This was not a calming moment. The options seemed to be freezing in the truck all night or walking the roughly 9km (5.5 miles) for the one way trip back to Hope, BC. Neither sounded like any fun in dropping temperatures (it made it down to -15°C/5°F that night). I was sufficiently pissed off that I contemplated acts of vandalism, but we drove back to the two other vehicles to see if those people had any appropriate tools to extricate us from the situation. The other truck and car were already on their way out of the park. The lady we talked to expressed some panic over the situation, had no tools, but also indicated she had just talked to someone about gates. She pointed out that she and the other man had talked to the people in the truck we saw driving away. They had discussed the gate, but nobody had indicated to her that they were about to lock it, or that it would be locked in the future. These two were locals from Hope, BC and regularly visited the park on weekends – and had never seen the gate locked before. In my own trips to the park in the fall after closing I had never seen that gate locked either. There are also no signs indicating that gate is ever locked, could be locked, or is locked during certain times or seasons. 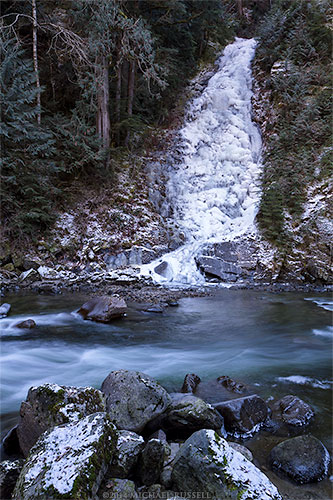 At this point Steve and I indicated to the man and woman that we would go back to a makeshift campsite we had seen along Sowerby Creek where I had seen various rocks and the remains of a post with a cement base. I wouldn’t dream of vandalizing property in most other circumstances. However, when someone locks 3 vehicles in an area that far from town, with temperatures that cold – ON PURPOSE I will certainly consider it. When we drove back towards the gate we passed the woman who was still there but the gate was OPEN! She didn’t know what had happened, but my presumption was the guy had busted through the gate somehow – probably using his old truck. All of this certainly has made me think of what tools and supplies I have in my own car when I go on such excursions! 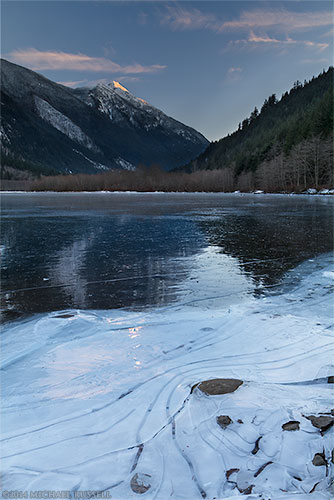 Ice patterns along the shore of a frozen Silver Lake

In the following days I was sufficiently ticked off by this incident that I contacted BC Parks asking who was in charge of this gate. The BC Parks website for Silver Lake Provincial Park indicates the following:

The Silver Lake Provincial Park campground is now closed for the season and will reopen May 2014. Those wishing to enjoy the lake may still do so by walking the 1 km in from the main gate.

As the gate that was locked is beyond 1km and is closer to 2km from the lake, I had assumed that the main, locked, park gate was the gate in question above, and I still believe that. BC Parks contacted me, expressed concern about this incident but also told me they are not in charge of the gate that was locked. The BC Parks area supervisor indicated to me that the gate was under the control of a logging company (Tamihi) and that their supervisor had told him he would talk to me about the incident. A few weeks of calling and a few voicemails later I’ve gathered the impression that this willingness to discuss the issue has waned, as I was never able to have that conversation. It is possible the truck driving away that had discussed the gate with our fellow prisoners did not contain those who locked it, but it does seem pretty coincidental. Perhaps the brave ice hunters we heard shooting across the lake locked it, but that seems unlikely.