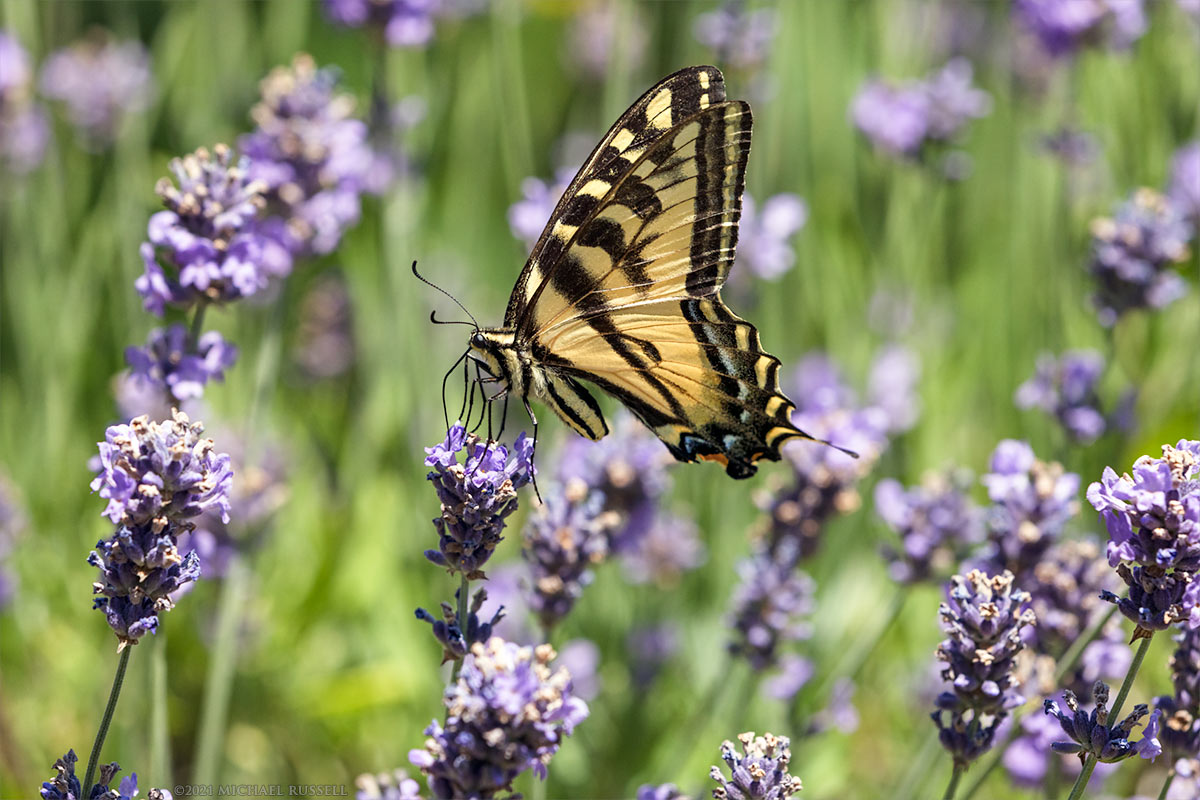 It has been a few years since I’ve had both vibrant lavender in the backyard and the right timing to photograph them during their peak. Luckily lavender seem to enjoy a hot and dry summer like the one we have been having. So over a few days earlier this summer I set out to make a number of lavender photographs because these subjects were easy to find – about 10′ out the back door. The highlight of all this was being able to photograph a Western Tiger Swallowtail (Papilo rutulus) as it flew from flower to flower looking for nectar.

The photograph above is a bit of a different angle on a butterfly than what you might be used to. This perspective, found as the butterfly went from flower to flower sipping nectar, shows it as much more of a big, leggy insect than just a pretty pair of flying wings (below). Adult Western Tiger Swallowtails are Nectarivores, feeding on nectar from flowers as their only source of food. The immature caterpillars feed on plant leaves. For the Western Tiger Swallowtail these are mostly cottonwood and birches, but also include willows and wild cherry amoung their favourites. 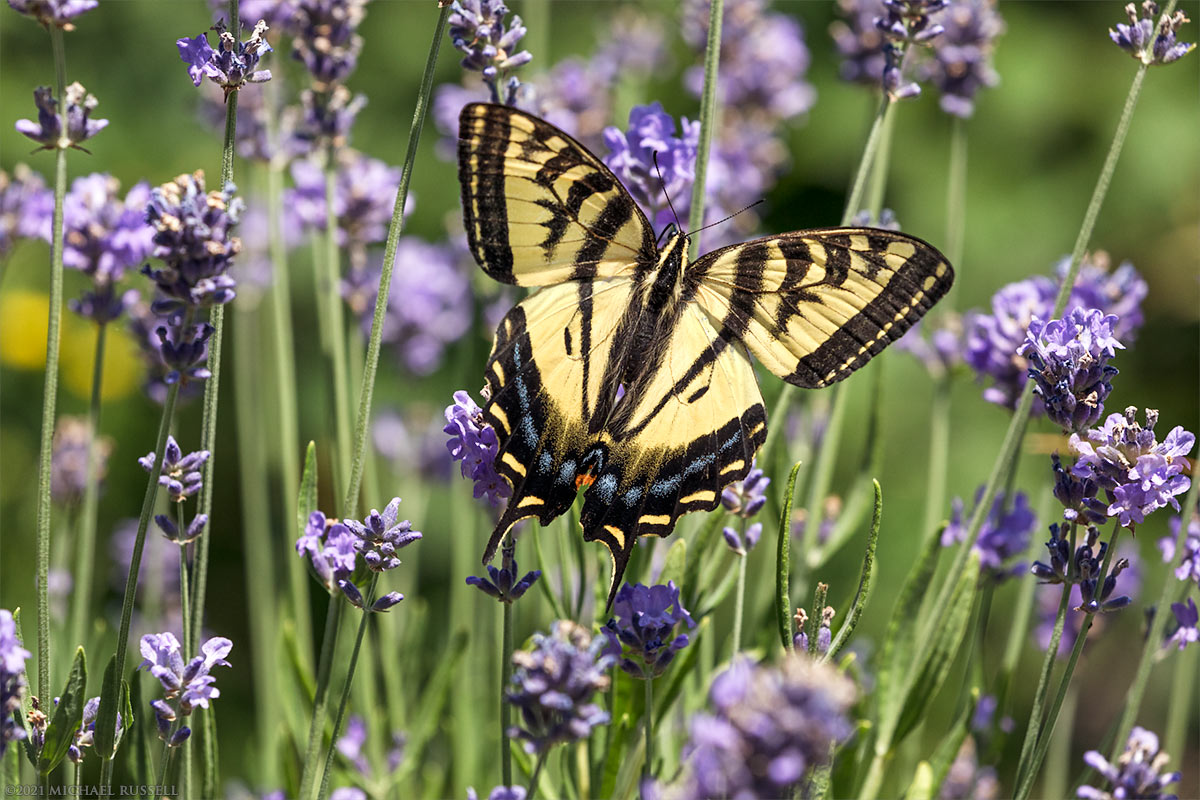 Bees are also favourite subjects in the garden but like the butterflies, they never sit still for a moment and require some patience. This small Bumblebee took a bit more time with this lavender flower gathering pollen and nectar which gave me an opportunity to make the photograph below. Honeybees and the native bees tend to be pretty relaxed, so I can get close with a macro lens and they don’t seem concerned with me at all.

As anyone who has photographed wildflowers will attest, a small amount of wind can be a big problem! I had to make a few attempts to make the photograph of lavender flowers and stems below as there seemed to be a lot of wind on the first occasions I tried it. The tall stems with the weight of the flowers on the ends sway in the breeze quite easily, and I even saw a few bees that botched their initial landing attempts so it was clearly giving everyone some problems. Lavender flowers are popular with nectar eating insects such as a wide variety of bee species and butterflies. 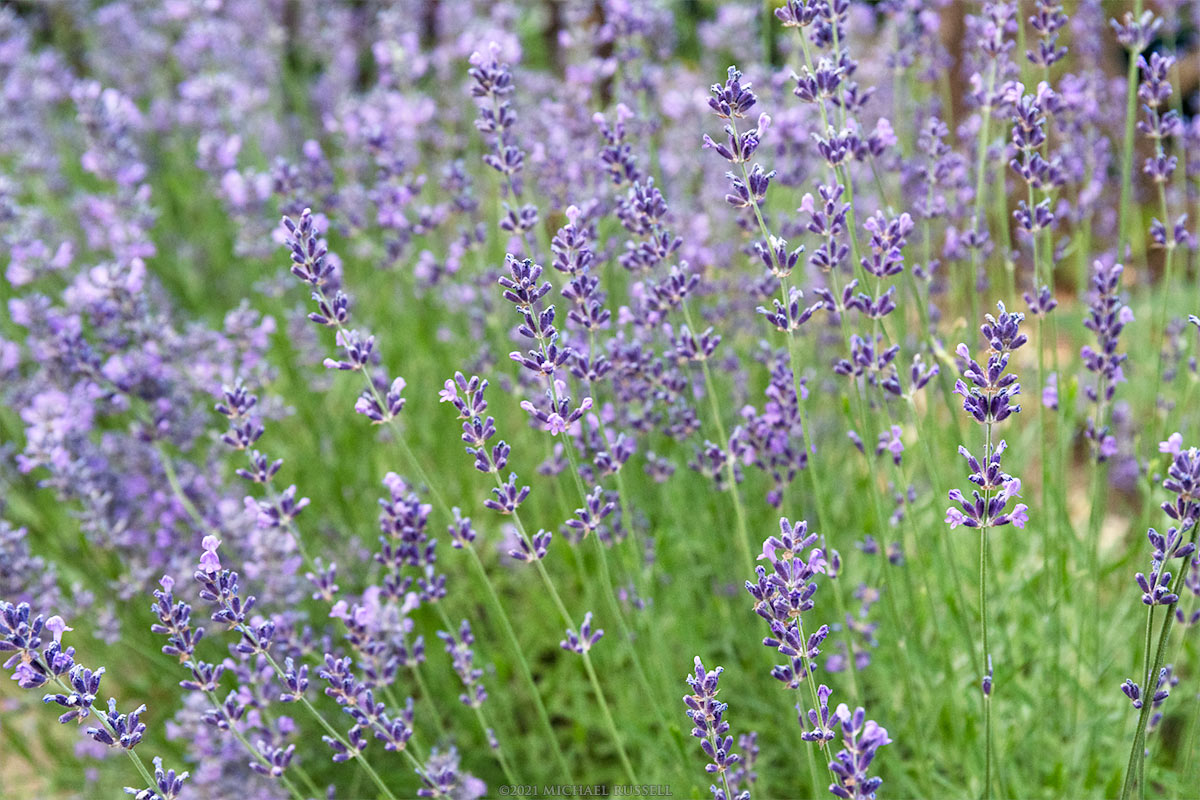 The photograph below is a bundle of freshly cut lavender flowers in a small bouquet on a white background. This photograph didn’t turn out quite as I had hoped, and I’ll likely make another attempt next summer. The bouquet is a bit small, and the shadows are a bit harsh. I was using a longer focal length here to keep my camera gear from casting shadows, and made a few photos to focus stack so everything would be in focus. What I didn’t count on was how quickly the lavender flowers would wilt, and I had to do a lot more processing than I’d have liked to pick exposures that lined up well without too much flower sag in between. The shots I made look like a wilting timelapse if you scroll through them fast enough! Anyway, I include this here not as a victory but as a monument to the effort if nothing else. Next year I’d photograph this again on an overcast and cooler day (if such a thing exists anymore in our summers) and a larger bouquet. Stay tuned! 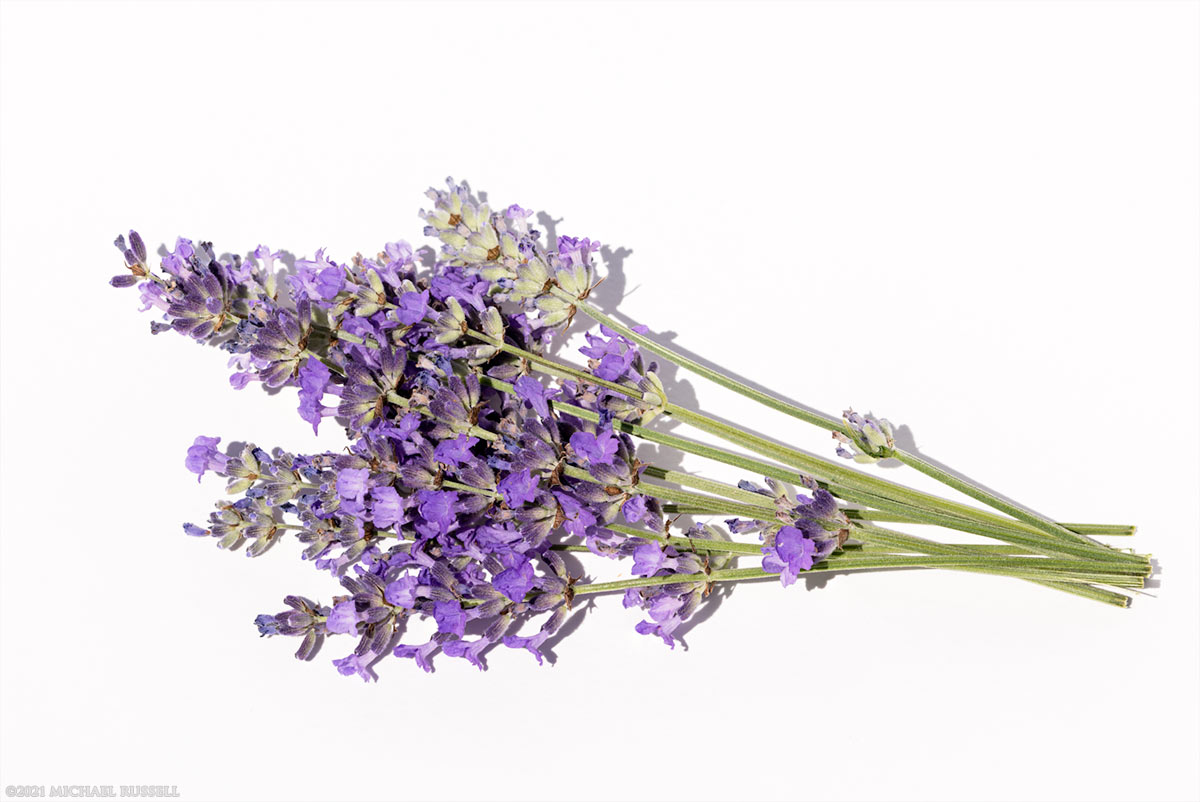 Bouquet of Lavender on a White Background (Purchase)

You can see more of my bee and butterfly photos in my Animals and Wildlife Gallery and plants in the garden in my Garden Plants gallery in the image library.

A few years ago I made it my quest to pursue the “perfect” bee on a flower shot. I took hundreds of photos – but my technique and understanding was not (apparently) very good. I wound up with a few keepers but nothing that really made me feel like I nailed it. Having to go through all of those shots burned me out on the idea and while I have shot the occasional bee since, I’ve generally avoided trying again.

I have a much better understanding of how to shoot this sort of thing now, and inspired by this post by Robin Black, I decided to try again. The lavender flowers in the backyard are somewhat past their prime, but the insects are still all over them collecting nectar. I found this Woodland Skipper (Ochlodes sylvanoides) to be a more interesting subject than the plain honeybees, though the Skippers seem to be a lot more manic in their movements. I am quite happy with this shot, but is it the “perfect” Skipper photo? Not yet!

Slowly getting close to catching up entirely…

Again a lot of bee photos. At least they aren’t on heather this time.