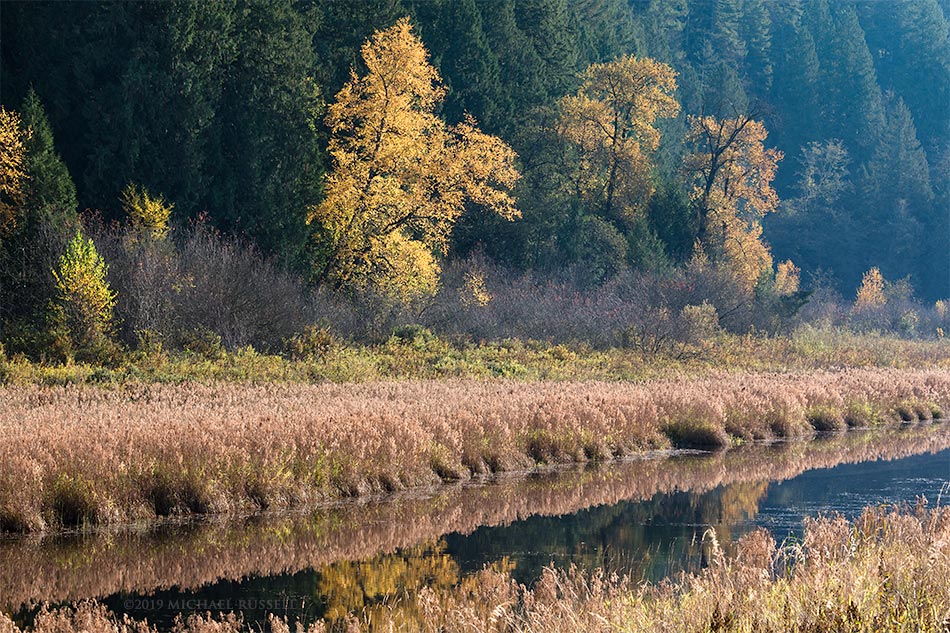 The Pitt-Addington Wildlife Management Area is a 2,972 hectare nature reserve in the northern part of Pitt Meadows, British Columbia. Much of the reserve used to be known as Grant Narrows Regional Park, but that was dissolved in 2011 when the Katzie First Nation were given control of the area – now called the Pitt-Addington Recreation Area. I have photographed near Pitt Lake many times, but mostly from the easy to access roadside spots. There are great views of the Pitt River, Pitt Lake, and the surrounding mountains readily available without straying too far from the car. A few weeks ago, however, I wanted to see what views could be found on the trails along the various dikes that head from the roads out into the marsh. Despite the presumption that most of the fall foliage would be gone, and the fact the midday light was filtered through a lot of smoke, I wanted to see what the area had to offer regardless.

I decided to start with the Katzie Marsh Loop. From the main parking lot, past the boat launch, there is a gravel road called the Swan Dike Trail that heads straight towards the Golden Ears Mountains. The main view on this stretch of the trail is not of the Golden Ears, however, but of Pitt Lake, the mountains to the north, and the Katzie Marsh to the south. I expect I’ll be back to photograph these mountain views again when the snow blankets them in a month or so. Along this trail I saw a number of Great Blue Herons (as one would expect) but also had a few passing Osprey, Bald Eagles, and various duck and waterfowl species. Approximately 500 meters from the parking lot there is an observation tower to climb for a better view. I also photographed the marsh plants below (likely sedges or reeds – I was unable to accurately identify them from my photograph) in this stretch of the loop trail. 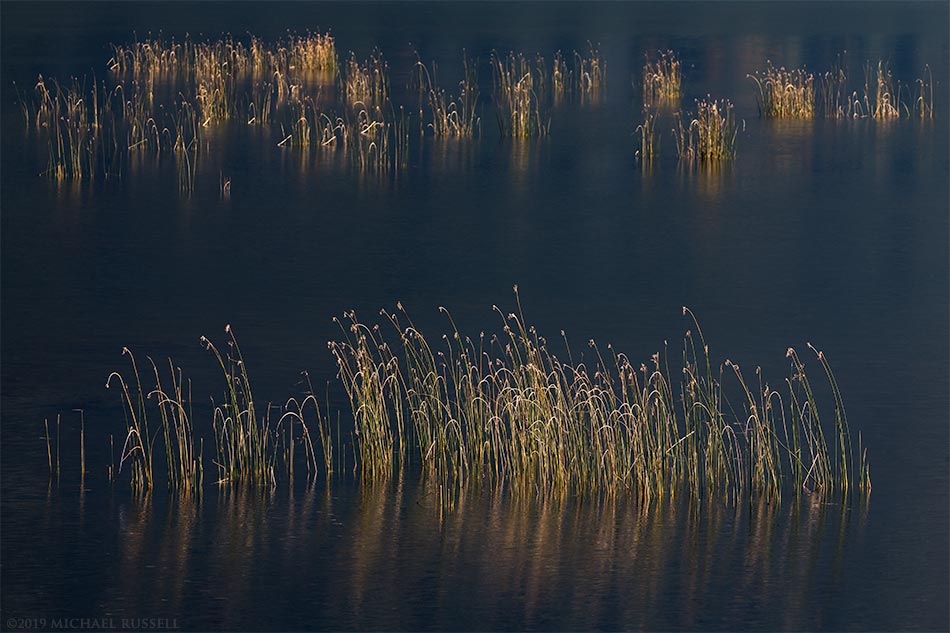 On the eastern edge of this part of the Katzie Marsh Loop the road continues to a (private) boat launch and dock. The loop trail itself turns south at this point, away from Pitt Lake (approximately 2.4km from the parking lot). While the trail is no longer a well maintained gravel road, the dike is easy to walk on, and quite flat. Heading south there is a long stretch of water on the left hand side, with Katzie Marsh area on the right. There are a lot of interesting trees and patterns in the rocks along this stretch, and I think it gave a better view of the waterfowl using the marsh as well. The first photograph above shows some remaining fall foliage in the Paper Birch (Betula papyrifera) trees at the base of the mountains to the east. Looking backwards to the north along this section of the loop trail also gives good views of the mountains to the north and some nice reflections.

After walking an additional 1.6km from Pitt Lake the trail turns a bit more to the southwest. This is where I found the pond below with a nice reflection of the trees behind it. There was a lot of waterfowl in this area, but many of them left as I approached (I hadn’t seen them until they flew away). There were a few cautious herons who remained, however. From this pond the trail turns even more westward and you come to another observation tower that gave a great view north towards the mountains, Pitt Lake, and gave a good overview of the Katzie Marsh itself. There were two large Kingfishers making a lot of noise in the area. They did not perch close enough to me to photograph, but they were continually on the move and if I’d had the time I likely could have made some good photographs from the cover of the tower. 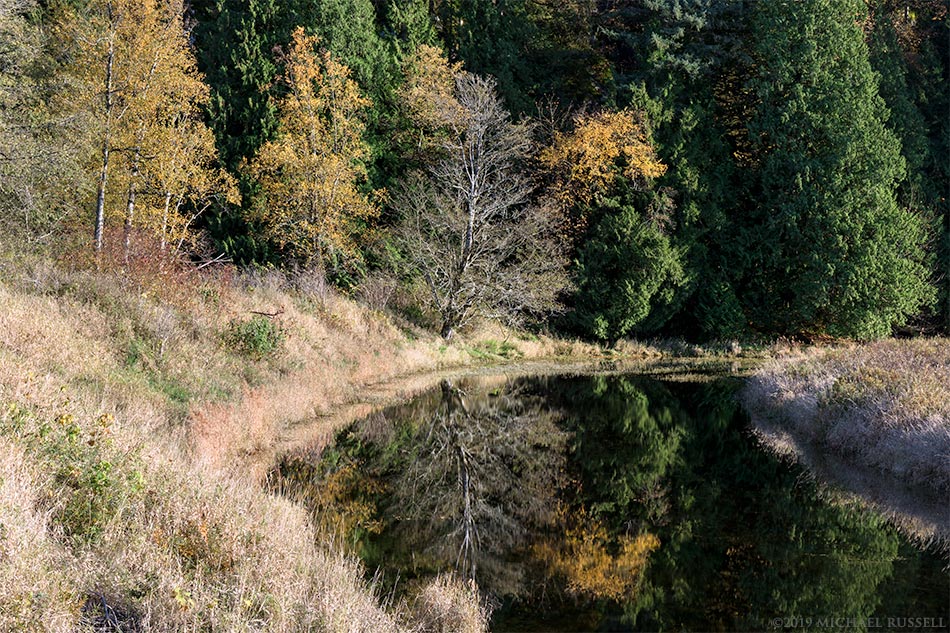 Near the observation tower the trail narrows and is no longer a wide dike trail. The trail for the remainder of the Katzie Loop not only was narrow with blackberries reaching out to grab all my clothing, but offered very little in terms of views of much of anything. This section of the trail is also right next to the water, and eroded in a few spots, so I had to pay attention to avoid a wet mishap. This made for a relatively uninteresting 2km trudge back to the parking lot. 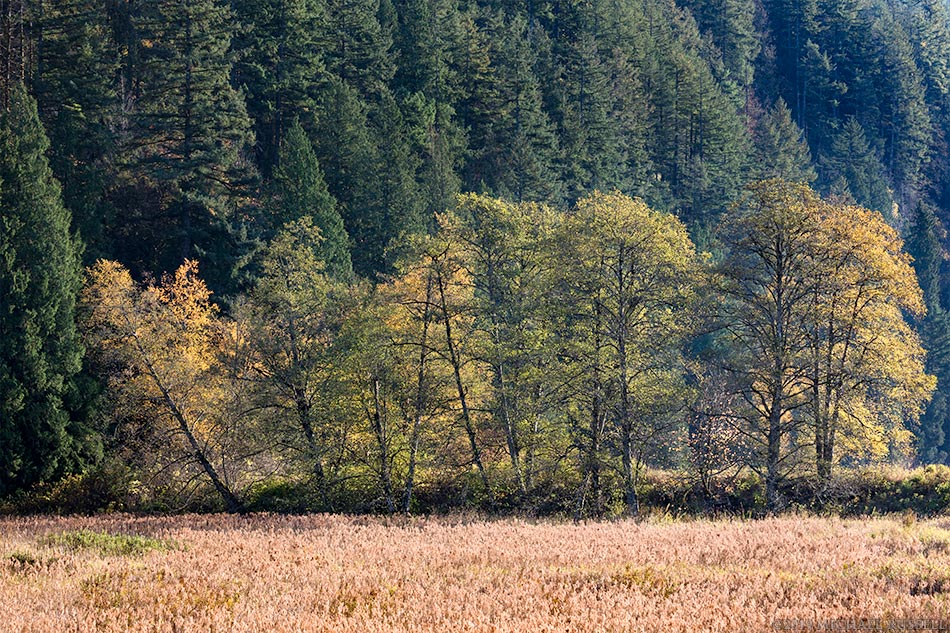 A Row of tree on the edge of Katzie Marsh (Purchase)

I think if I had the time and were to walk the Katzie Loop Trail again soon, I’d turn back at the southern observation tower and go back up to Pitt Lake and then to the parking lot rather than do the whole loop. The last stretch is not interesting, maybe slightly dangerous if you aren’t paying attention, and doesn’t have much in the way of any opportunity for photography or views. All in all I walked 6.8km in completing the loop. Skipping the last stretch to the parking lot would make the “loop” a bit longer at around 9km total distance. This is likely what I will do next time I visit when the snow has arrived. Some of the trip back will be facing the mountains too which will be a great view.

For more photographs of the Pitt River and Pitt Lake area visit my Pitt Meadows Gallery.