A sailboat sails on English Bay past the West End neighbourhood of Vancouver, British Columbia, Canada. 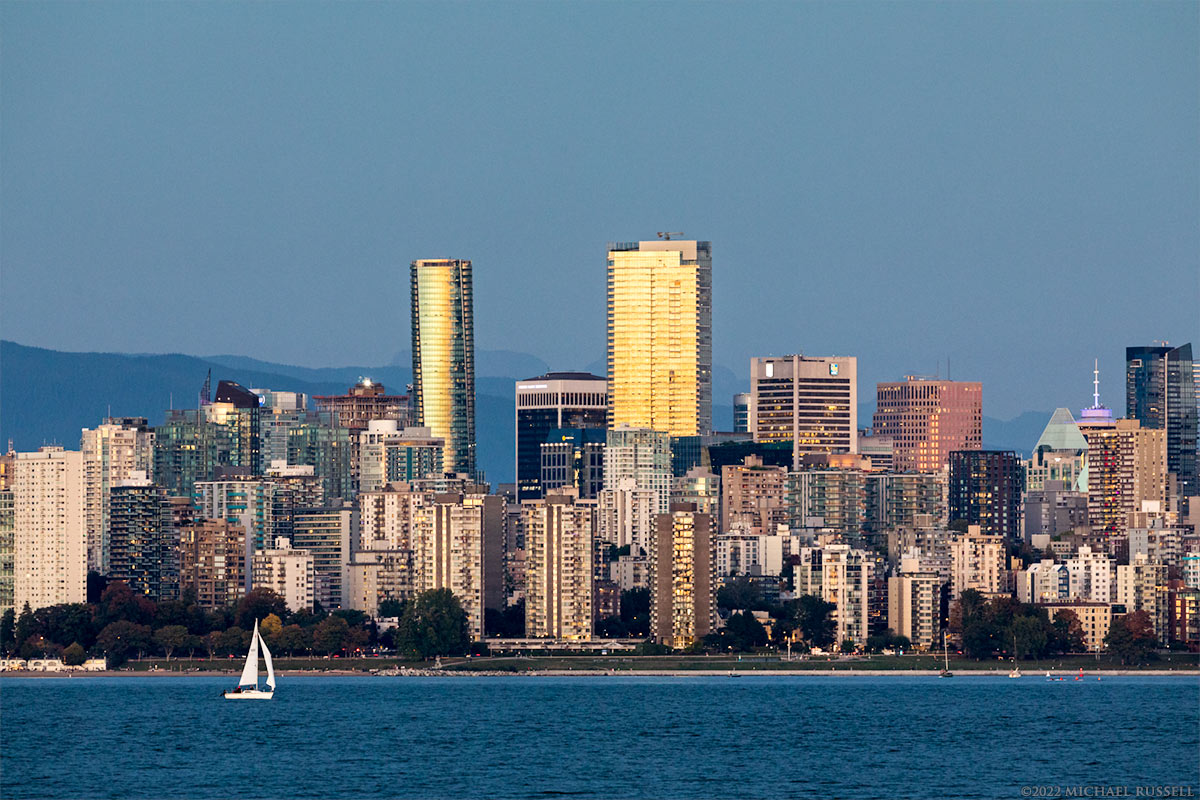 Sailboat on English Bay near the West End of Vancouver (Purchase)

While it was technically the first full day of fall, an evening I spent last September taking in the views from Jericho Pier and Locarno Beach felt like a late summer evening. There were plenty of people enjoying both the beach and the waters of English Bay. I don’t think anyone was swimming but I saw everything from yachts to sailboats down to paddleboards and kayaks all over the water. A lot of my photos from this evening either have sailboats in them or I had to wait a while until they passed. The photograph above was made of the West End and Downtown Vancouver after sunset from Jericho Pier. The two taller towers are the Paradox Hotel (left) which recently has mercifully been renamed from a previously embarrassing moniker, and the tower in the middle is a hotel called Living Shangri-La. 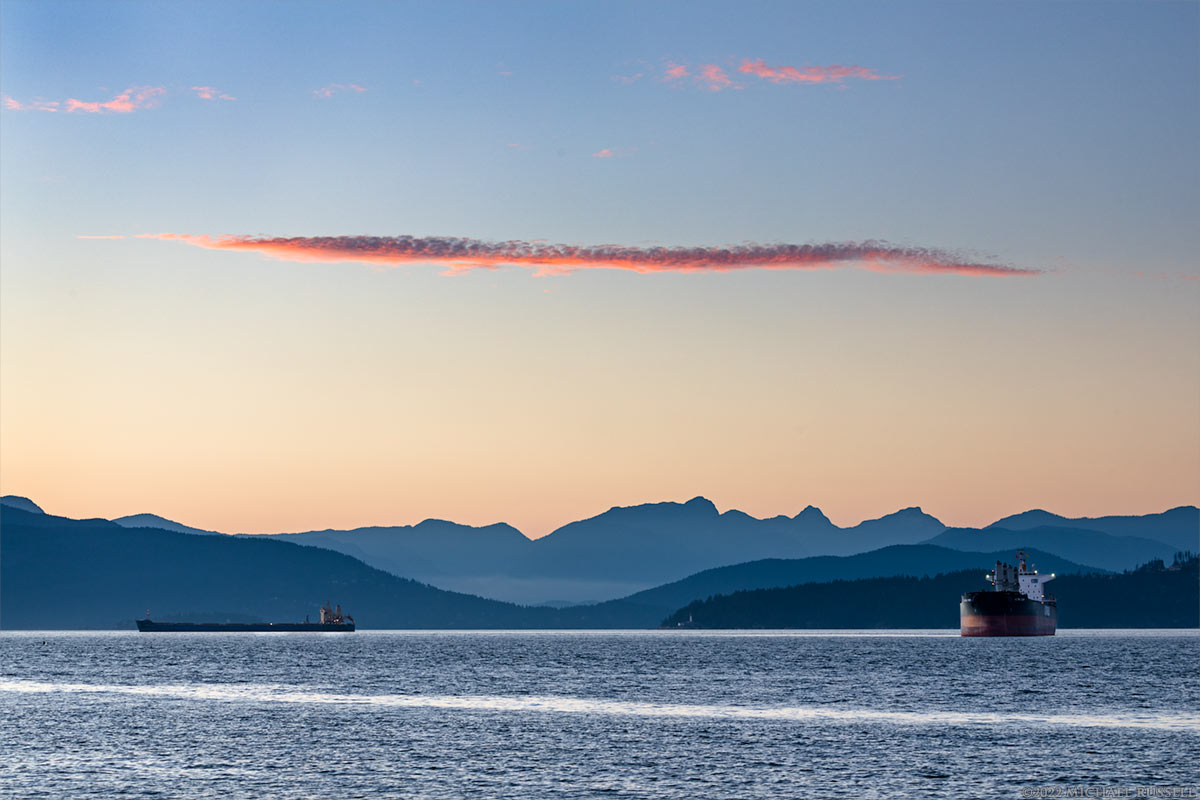 A cloud lit by sunset over English Bay (Purchase)

I don’t often find that a sunset is a subject of much interest in itself. The light at that time can be great, but I tend to be facing somewhere other than west when one is occurring. These freighters were among the many ubiquitously anchored in English bay waiting to load or offload. As seen in the photograph below, I was keeping an eye on the mountains the northwest as a good background. When this one strip of cloud lit up from the sunset I walked a bit to line it up with the two freighters. I made this photograph, like many others on that evening, from Jericho Pier. I’d not visited this pier before, but it seemed like an area that would have good views in many directions, and so after walking around Locarno and Jericho beach areas I settled on it as a spot for the later evening photographs. Unfortunately, like Cultus Lake and a few other locations I visited this fall, the storms this past fall and winter were not kind to Jerico Pier. A strong windstorm during a King tide destroyed some of the pier and it has been closed. Much like the damage to White Rock Pier when a dock and sailboats were bashed against it, Jericho wasn’t able to remain intact after high tides and winds battered it with stray logs/trees from English Bay. The pier remains closed, and I’m not sure if there are plans to repair it. 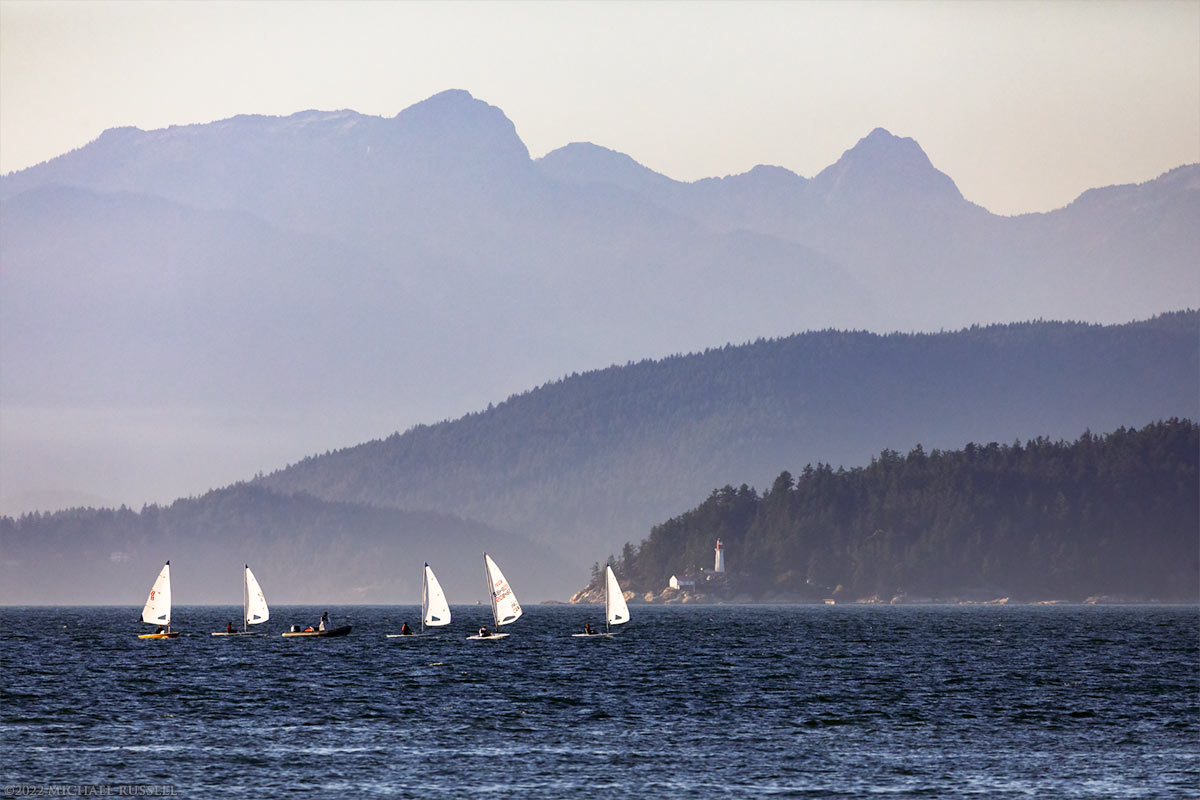 As I mentioned earlier there were a lot of sailboats in English Bay on this evening. This group appeared to be a sailing class from the Jericho Sailing Centre nearby. With the Point Atkinson Lighthouse (in West Vancouver’s Lighthouse Park) and the Tetrahedron Range (Panther peak and Tetrahedron peak on the Sunshine Coast) in the background I made a photo quickly before they came into the frame. I then thought I should try one including them and I like both results.

I do enjoy making photographs of downtown Vancouver and that subject is often one that calls (to me) for a panorama. This photograph shows the buildings of the West End and Downtown areas of the City of Vancouver as viewed from Jericho Pier. On the left you can just spot the Inukshuk at English Bay Beach with Kits Point on the right. I don’t find this skyline nearly as interesting as the view of downtown from Stanley Park but with tall new buildings going up all the time the character is likely to change.

This is an example of a typical sunset photograph of mine – facing east! The light from sunset made a great, warm, glow on the buildings of Vancouver. You can just see the “Golden Ears” of Mount Blanshard and Blanshard Needle peeking out above Eagle Mountain in the background.

For more photographs from this evening and the City of Vancouver visit the Vancouver Gallery in my Image Library.