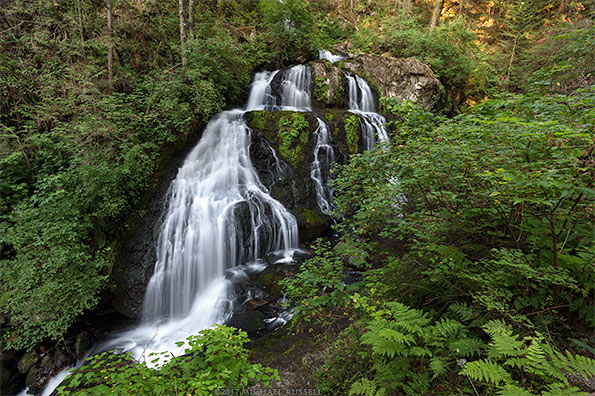 A few weeks ago I returned to Steelhead Falls in Mission’s Hayward Lake Recreational Area to make some photographs. The first time I photographed Steelhead Falls was an overcast day in late spring – quite different conditions than I found on this sunny day in mid August. To get to the falls you must first find the parking lot at the top of the hill (just to the east of the Stave Lake Dam). From there the falls can be found after a short hike along the Reservoir Trail heading south. There is a short trail down to the viewing platform and the falls after you cross the bridge over Steelhead Creek – which is the second creek you’ll cross.

This first photograph here is the main view of the falls you see from the viewing platform. You can see some direct sunlight in the upper right corner. I usually photograph waterfalls on an overcast day as direct sunlight can be pretty difficult to deal with. An alternative to this is waiting until the sun starts to set and the direct sunlight is no longer falling on the falls. The effectiveness of this will depend on the location. This worked out quite well at Steelhead Falls though I had to wait until those spots of sunlight made their way up the hill and were no longer shining on the water. 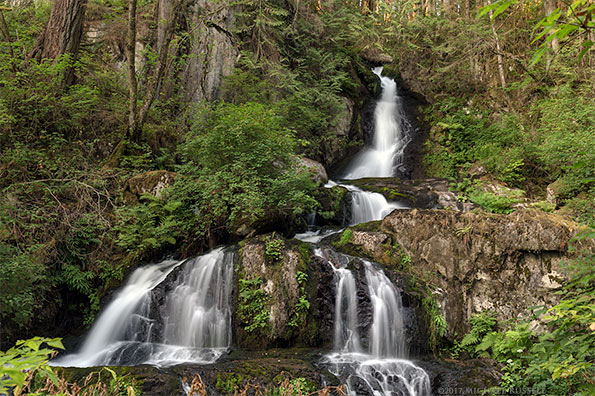 You can see quite a difference between my photographs of Steelhead Falls a few years ago and these ones even though some of the locations and compositions are similar. The overcast days tend to lead to more saturated colors while the conditions I had a few weeks ago cast a warmer glow over everything – and I quite like that effect (best seen in the last three photographs here). You may also see a bit of a difference in the amount of foliage around some of the spots I photographed. It seems in the few years since I was last there Steelhead Falls has become a bit of an Instagram place to be seen and has attracted a lot of people who could learn a bit about “leave no trace”. “The shot” people are after seems to be from the bottom of the falls, so there is a “trail” down there now and a lot of the foliage (mostly Salmonberry and various fern species) are trampled or have died. When I was there clearly someone had used a machete or something similar to hack a trail along the edge of the creek towards an upstream area. The area isn’t totally defoliated like I’ve seen at some sites, but if the popularity here remains, I’m sure that will be the eventual outcome. 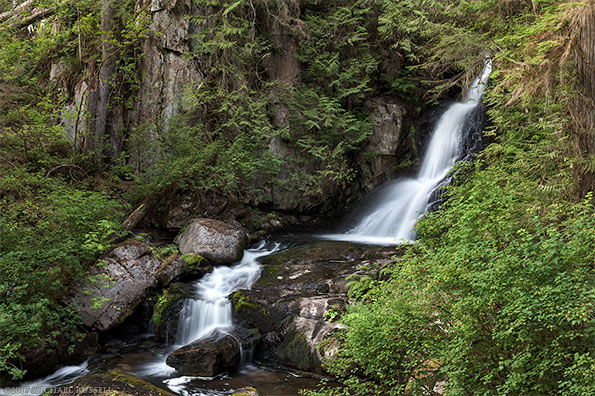 This last photograph shows the very top of Steelhead Falls that you can’t see from the angle of the viewing platform. There are a lot of different tiers to this series of falls and together they make a good photography subject as there is no shortage of composition possibilities. Trampling foliage off the trail to get the Instagram shot from the bottom of the falls just isn’t necessary.

For more photographs of this location visit my Waterfall Gallery.