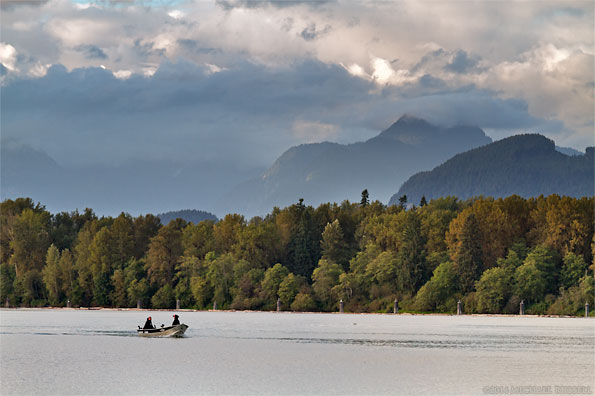 Salmon season sees fishing boats of all sizes in the Fraser River of British Columbia. I photographed these two fishermen in a small aluminum boat one evening on the Fraser River from Brae Island Regional Park.

For more photographs from the Fort Langley area visit my Fraser Valley Gallery.

Sunset at Tavistock Point and the junction of the Fraser River and Bedford Channel at Brae Island Regional Park in Langley, British Columbia, Canada 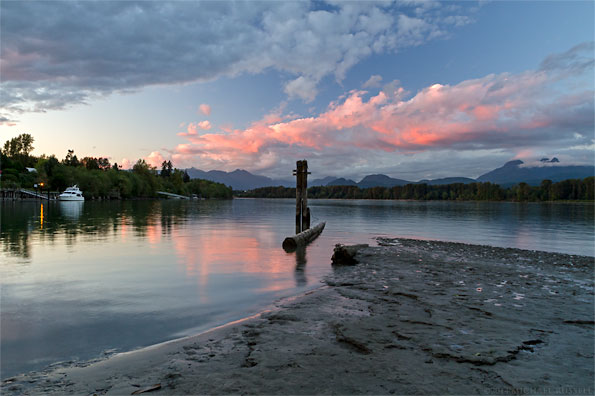 Sunset at Tavistock Point on the Fraser River (Purchase)

Earlier this week I was in Fort Langley, British Columbia to do some photography, or at the very least scout some locations. I quickly realized that walking along the Fort to Fort Trail would not yield me the views I really wanted so I crossed the bridge to Brae Island Regional Park and walked along the river there. In a few spots where I was able to photograph some Fraser fishing boats tied on on the docks, but the best view was at Tavistock Point on the far end of the Island. I had walked here (about 5km round trip) earlier in the year, but the mosquitoes were so bad that I jogged much of the way just to keep the cloud of them behind me. Even so, I wound up with about 50 bites, which were not pleasant. This time there were no mosquitoes and the cooler late September air was a more pleasant walk anyway. The forecast was for very little chance of clearing so I was quite lucky to get this opening in the clouds and some nice sunset colours as well. Previous to making this photograph, there was some clearing on the Golden Ears (Mount Blandshard) and I was able to photograph some interesting cloud formations and some sunset light on the peaks. I’ll leave that panorama photograph for an upcoming post though.