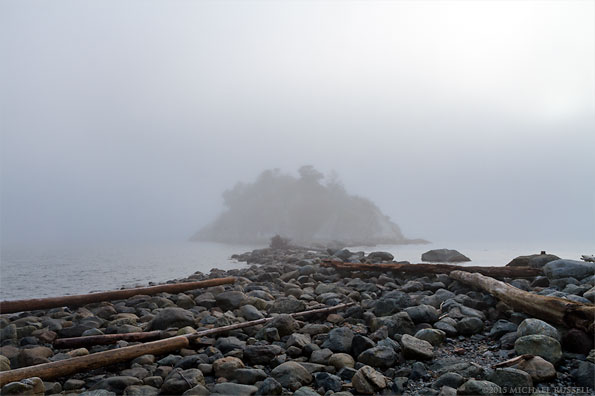 I mentioned in an earlier post that some of my early October photography plans were somewhat thwarted by the fog rolling by the shore in West Vancouver. I was happy to find almost no fog in Horseshoe Bay but I visited Whytecliff Park in West Vancouver shortly after and as you can see, there a lot of fog just offshore. Part of my plan was to photograph one of the BC Ferries as it passed, but obviously this was not possible. There are almost no photography days where everything goes according to plan, so I embraced the fog and stopped at Whytecliff just to photograph it. Quite often a change in plans just means I manage to photograph scenes I could not anticipate ahead of time. I did enjoy photographing this scene with the fog as it is not something I get to work with very often, so this was a nice change. It was a bit cold though, which made for a more peaceful visit than usual. Going to Whytecliff in the summer means the beach will be elbow to elbow with beachgoers.

A Freighter anchored in Vancouver’s English Bay surrounded by fog. 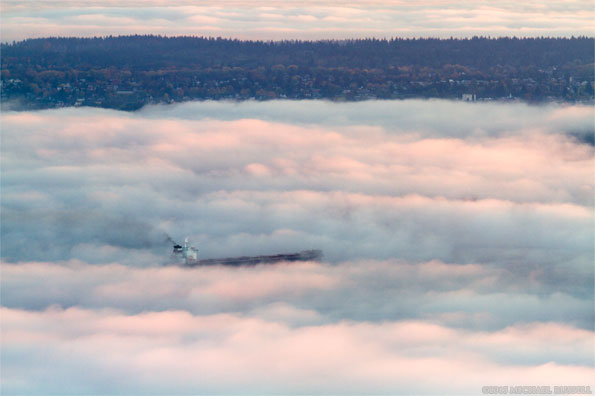 When I photographed Horseshoe Bay earlier this month some of my plans were changed by unexpected fog so I took the opportunity to check out the nearby Cypress Lookout. The lookout is up in Cypress Mountain Provincial Park in West Vancouver and offers a good view of the city of Vancouver and much of Metro Vancouver too. I was hoping to get a good spot (the lookout can be rather busy) before blue hour and made this photograph of a Freighter briefly showing through the fog while anchored in English Bay. The land you can see just beyond the freighter is Point Grey just to the east of UBC.

For more photographs from the Vancouver area visit my Vancouver Coast & Mountains Gallery.

Soon after a heavy rainstorm in Manning Provincial Park I shot these photos of the clouds swirling around the mountains and ridges just off the Crowsnest Highway (Hwy 3). In the shot above Mt. McConnell emerges from the clouds. Below, the clouds swirl around a ridge on Silverdaisy Mountain. I would have loved to be able to do a time lapse at this point – the clouds were moving really fast.

A bit of rain between me and the clouds so its a bit grainy but for a cold foggy and rainy day that seems appropriate. This was taken from Barnet Marine Park but these hills are actually in Belcarra Regional Park