Fresh snow creates an outline on each branch of this thick deciduous forest at Derby Reach Regional Park in Langley, British Columbia, Canada. 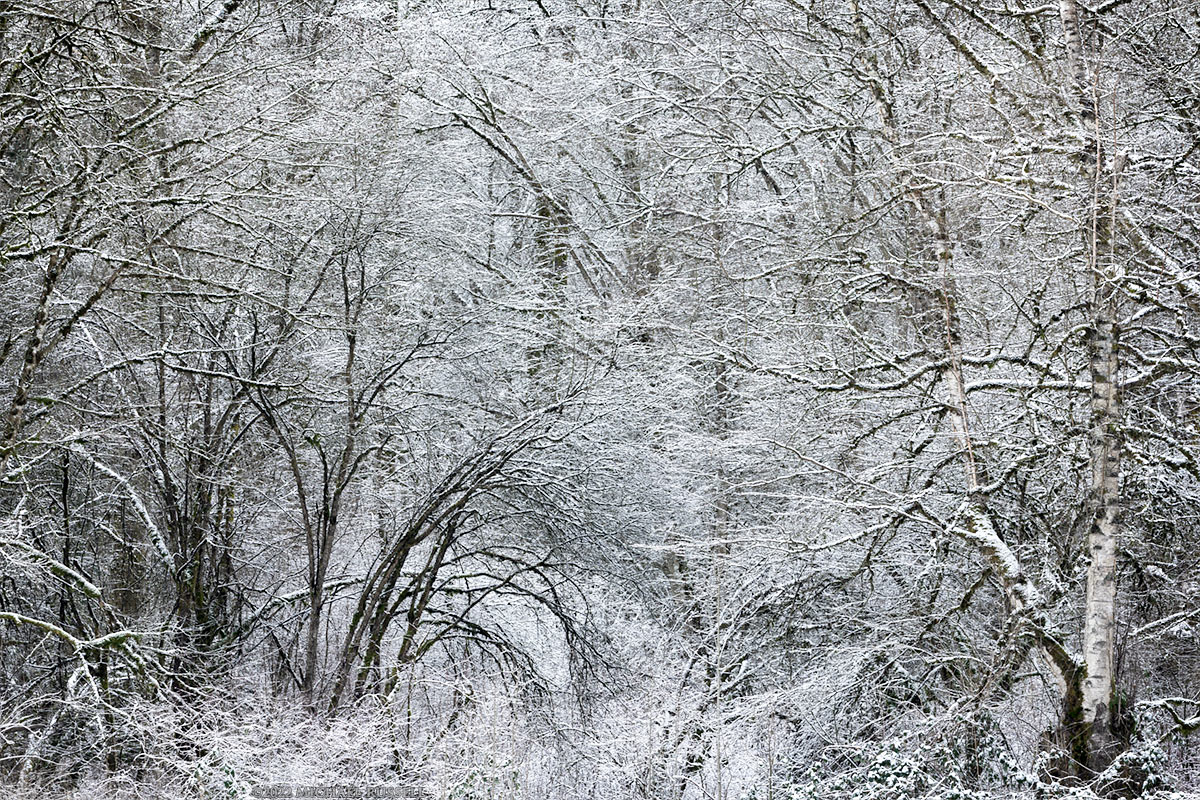 Snow Outlines the Branches in a Deciduous Forest (Purchase)

In early January we had a light snowfall overnight here which actually stuck around through the next day. So often even a large dump of snow is a bit slushy the next day, or everything turns to rain, and there aren’t many photography opportunities in those conditions. I can often see snow on the mountains without such conditions down here closer to sea level, but snow covering the trees like in these first two photographs is certainly more elusive. As this was something I’ve been waiting for I actually made a photo from the backyard of a tree across the street that was lit by a street light in case everything was gone by morning! Luckily, that didn’t happen.

As the conditions looked promising I headed out to Williams Park which is a small local park I like to visit, often just for a walk. There is a creek running through the length of it and the sound of water is always a good accompaniment to a 2-3km stroll. It can also be nice with snow around, but the scenes there weren’t speaking to me that day so I headed north to Derby Reach Regional Park. Forest scenes can be a tough subject to find a composition with – so many branches and plants heading in different directions can create quite a mess of sorts. With some snow on the branches, however, it is a bit like a highlighter has been drawn on all the branches and they stand out in a more individual fashion. I photographed the scene above, one I’ve seen a dozen times without really noticing any distinctiveness to the flow of the branches, but the snow changed that. It was pointed out to me that this first photograph would make a good jigsaw puzzle. For those who enjoy a lot of frustration, I suspect. 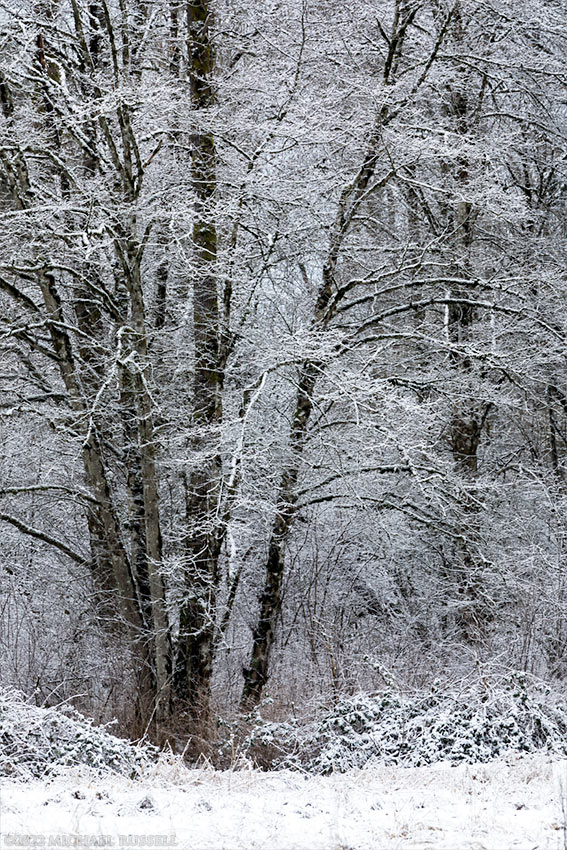 Further down the trail this individual tree grabbed my attention again due to the fringe of snow on each branch that makes the tree (a Red Alder in this case, I think) 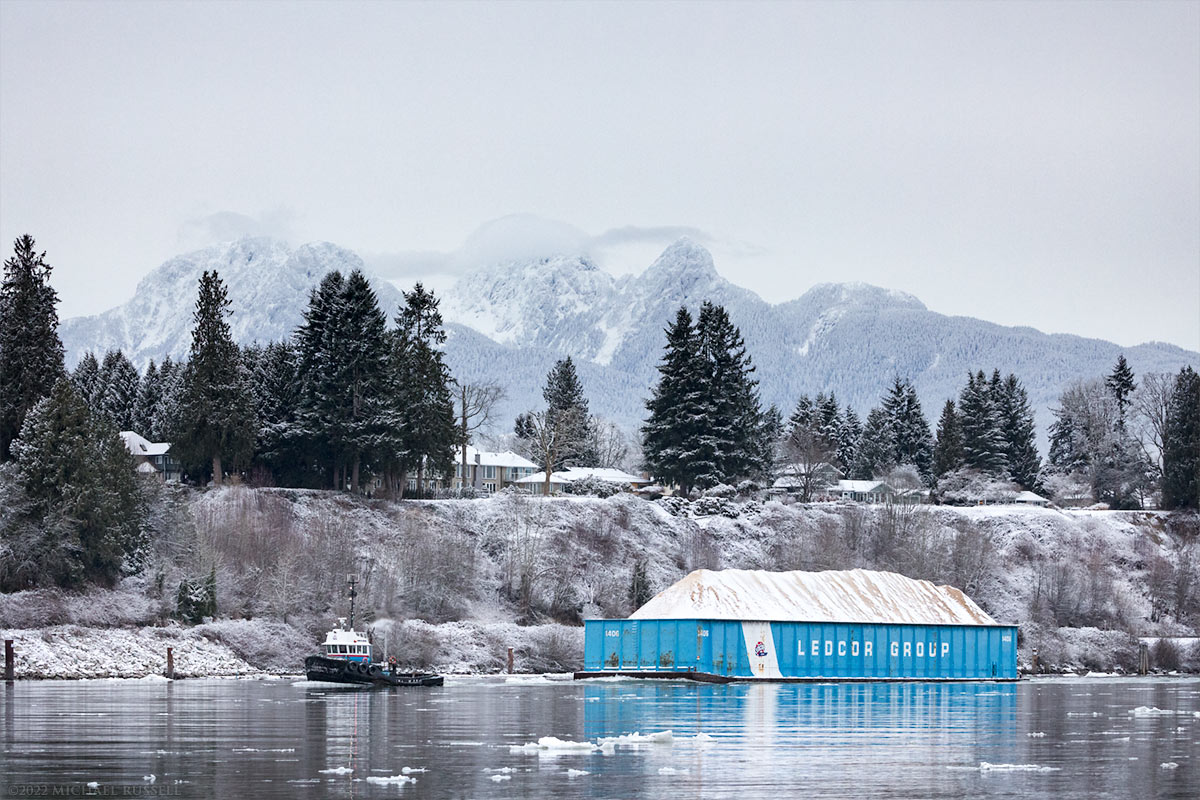 Tugboat Towing Barge of Sawdust Down the Fraser River (Purchase)

When I visit Derby Reach Regional Park I tend to frequent an area called Muench Bar which gives a nice view of the Fraser River and on a day of good weather – the Golden Ears Mountains. I tend to photograph these peaks too often frequently, as previous posts in this blog will attest. When I’m along a big river like the Fraser, there is usually some boating activity and I’ll often photograph them as they go past my location. Here I had both subjects available, so I photographed this Ledcor Tugboat towing a barge full of sawdust down the river – with the Golden Ears (Mount Blanshard) in the background. The clouds were frequently obscuring then dissipating from the mountain peaks but I was usually able to wait until they became visible. 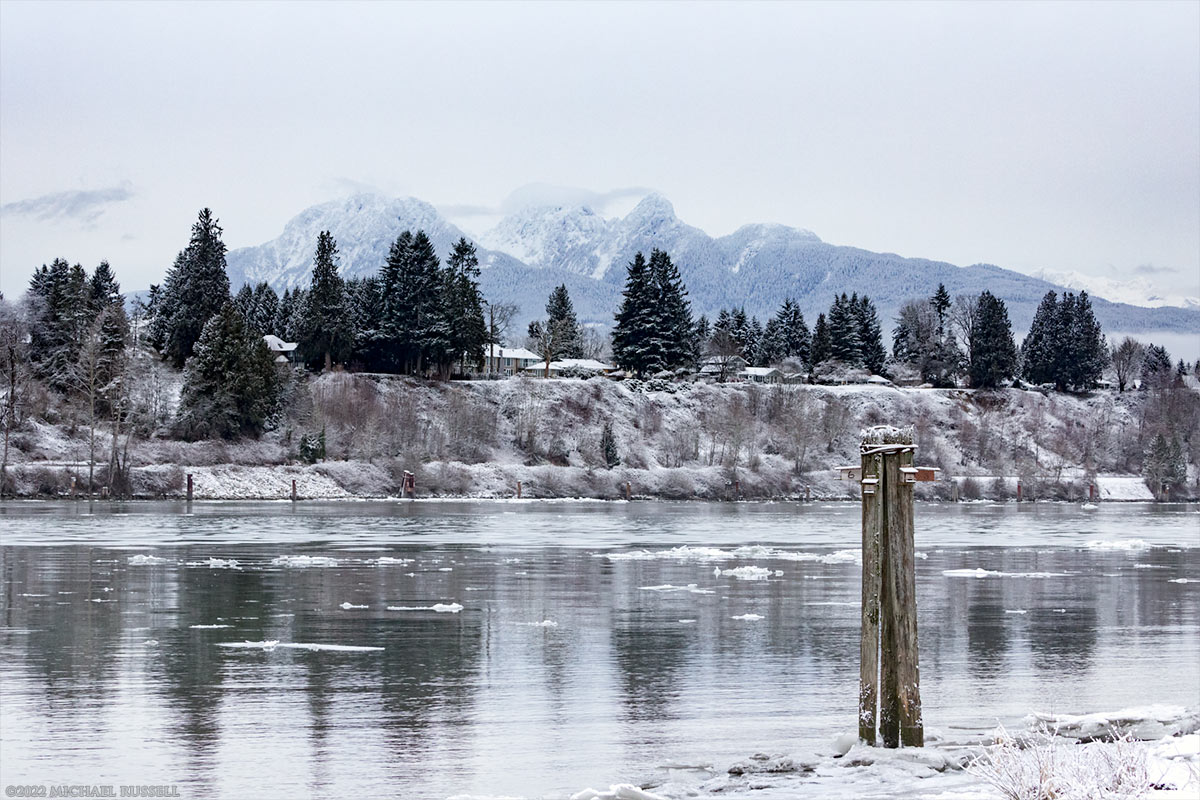 The Golden Ears and the Fraser River (with ice!) on A Winter Day (Purchase)

We don’t often have a cold snap long enough to form ice on the Fraser, but this happened a few times this winter. At one point parts of it were frozen over, which isn’t that common. During this cold spell there were again chunks of ice flowing in the river, and I included the pilings in the foreground mostly due to the nest boxes at the top. These nesting boxes are for the Purple Martin (Progne subis) I believe – though they might be used by other species as well.

As I was heading back to my car from Muench Bar after sunset there were some more interesting blues in the sky and I again made a panorama from my favourite view of Mount Blanshard. I have previously photographed Mount Blanshard from this same spot in the spring. I should try to get a photo like this in every season to complete the series.

For more photographs from this snowy day visit my Langley Township/Langley City Gallery.

This spring hasn’t been a time where I’ve managed to make a lot of photographs. Due to the pandemic situation I’ve been staying home, and the few times I’ve gone to a local park it has been without my camera. Earlier in the year, however, I did manage to get a few of my desired locations/subjects photographed (it’s a very long list). The three most interesting visits were to Golden Ears Provincial Park, Pitt Lake, Derby Reach Regional Park. One thing all 3 locations have in common is they have great views of different angles of the Golden Ears Mountains (Mount Blanshard). The Golden Ears are one of my favourite mountains – and one I grew up looking at outside my bedroom window. So I thought I’d make a post here with a number of Golden Ears photographs made recently.

The first panorama of the Golden Ears above shows some sunset light shining on the trees in the foreground at Derby Reach Regional Park. I’d walked these trails for the first time the previous year and thought this might be a good location to photograph the mountain with some snow on it. I had been hoping for some sunset glow on the mountain followed by blue hour. I didn’t get that glow, but the sunset did light up the trees in the foreground quite nicely at an area of the park called Meunch Bar. The photograph below shows the same location after sunset. The nesting boxes in the foreground are mostly utilized by swallows I believe, but I haven’t confirmed that yet this spring.

The next photograph below shows a perspective on the Golden Ears that I have photographed in the past. Actually, I made this photograph as an alternative to another panorama I shot in the same spot – one that I sold a rather large canvas of in early March. The client and I had gone through a few potential images before deciding and I wanted to throw a few more possibilities (at higher resolution too) for the next client. The is the view of the mountain from the farmland areas on the way north to Pitt Lake.

Anyone who has visited Pitt Lake will be familiar with the view below of Mount Blanshard from the west. This is McPhaden Peak (part of the Mount Blanshard Massif) with a lot of fresh snow and some sunset light. I made this photograph from the edge of the Pitt River near Pitt Lake in Pitt Meadows, BC.

In mid-February I visited Golden Ears Provincial Park and walked along Gold Creek to Lower Falls and then to North Beach. The photograph below shows a familiar site to all who have stopped and looked at Alouette Mountain’s Blanshard Peak which is part of the Mount Blanshard Massif. Gold Creek winds its way through the foreground on many photographs from this area, but I wanted to photograph just the mountains and snow for this panorama.

As with the photograph above I wanted to concentrate on the mountain peaks and the snow in the photo below. This is Alouette Mountain’s Blanshard Peak with fresh snow on it and a fringe of sunlight along the southern edge. 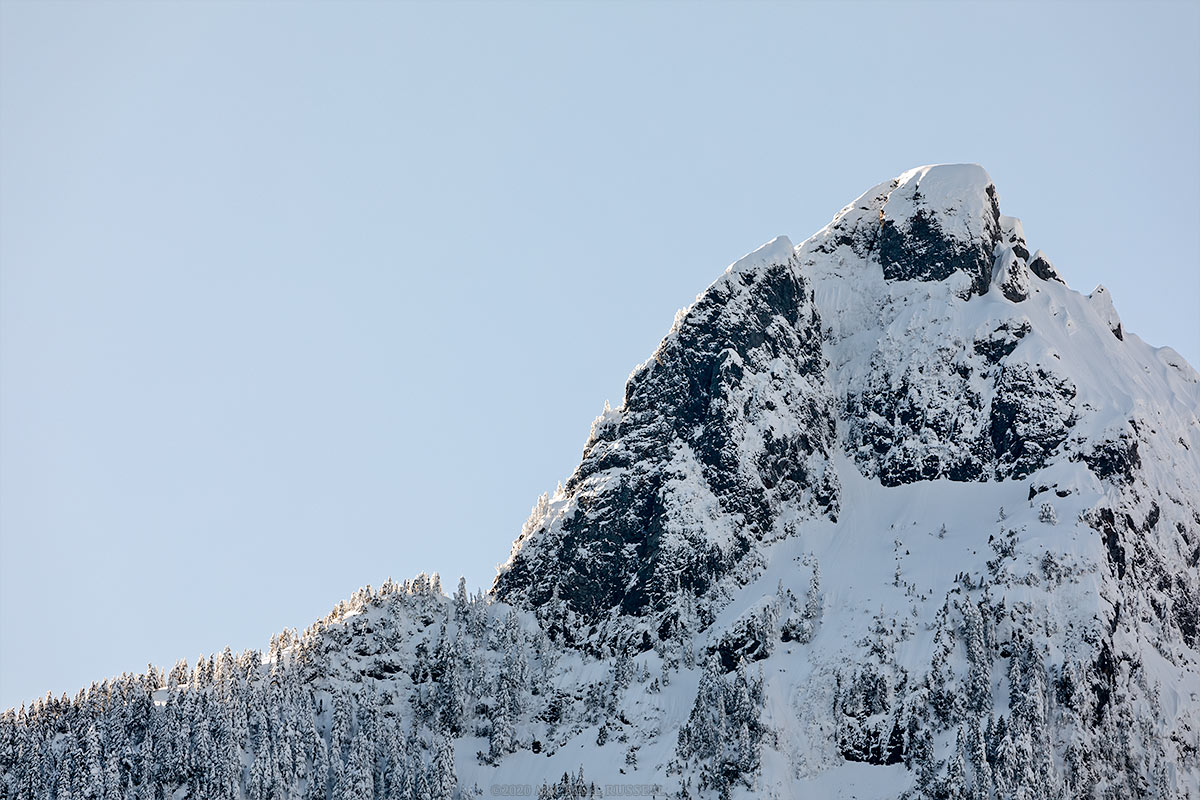 A few weeks ago I went to the Langley Bog for the first time as there was a new viewing platform off of the Houston Trail in Derby Reach Regional Park. I had never walked on the Houston Trail but was aware of it and the bog (which is generally closed to the public) on my many drives past the trailhead. While the Langley Bog is a very interesting place biologically, I didn’t find all that much insight into that via the viewing platform (built by the Derby Reach Brae Island Parks Association. Granted, everything was frozen solid at the time and spring/summer may yield more wildlife viewing and other interesting things. This may be a good spot for birding in the future. I also hope that this is not the end of construction. Burns Bog has a lot of trails and boardwalks (via the Delta Nature Reserve) where you can walk, with relatively low disturbance of the bog itself. It would be nice if this kind of thing could be incorporated into Langley Bog in the future.

For more photos of the Langley area visit my Fraser Valley Gallery.