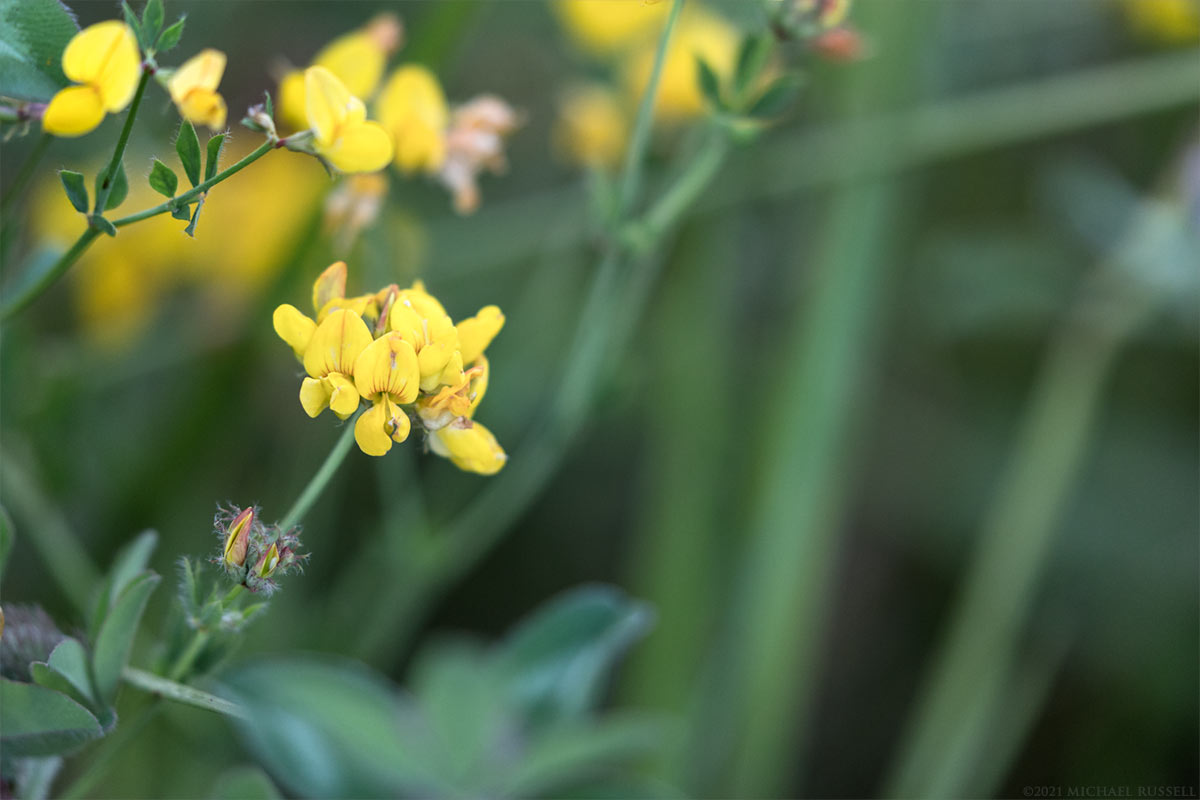 Campbell Valley Regional Park is a 548 hectare park I live fairly close to, and so I visit it quite often. It can be fairly quiet in the evenings there, so it is a good destination for a spur of the moment visit. The photos here are from a walk I did through north side of the park back in mid July. The trails through the fields and forests there can be a good spot to look for wildflowers both native and invasive. Of the invasive variety is the Common Birds-foot Trefoil (Lotus corniculatus) above which is a species I’ve not noticed in the park before. The flowers remind me a bit of Scotch Broom and Toadflax, both of which are also invasive species here in British Columbia.

I hadn’t intended to photograph this backlit Bracken Fern (Pteridium aquilinum) as a panorama of sorts, but it wasn’t a subject I could approach as I wished. The fern was growing well off the trail so I cropped the photo I made (always from the trail!) as the top and bottom were intruded upon by tree branches in the forest. The back lighting was attractive though, so I worked with a longer lens to get as many fern fronds in as possible. 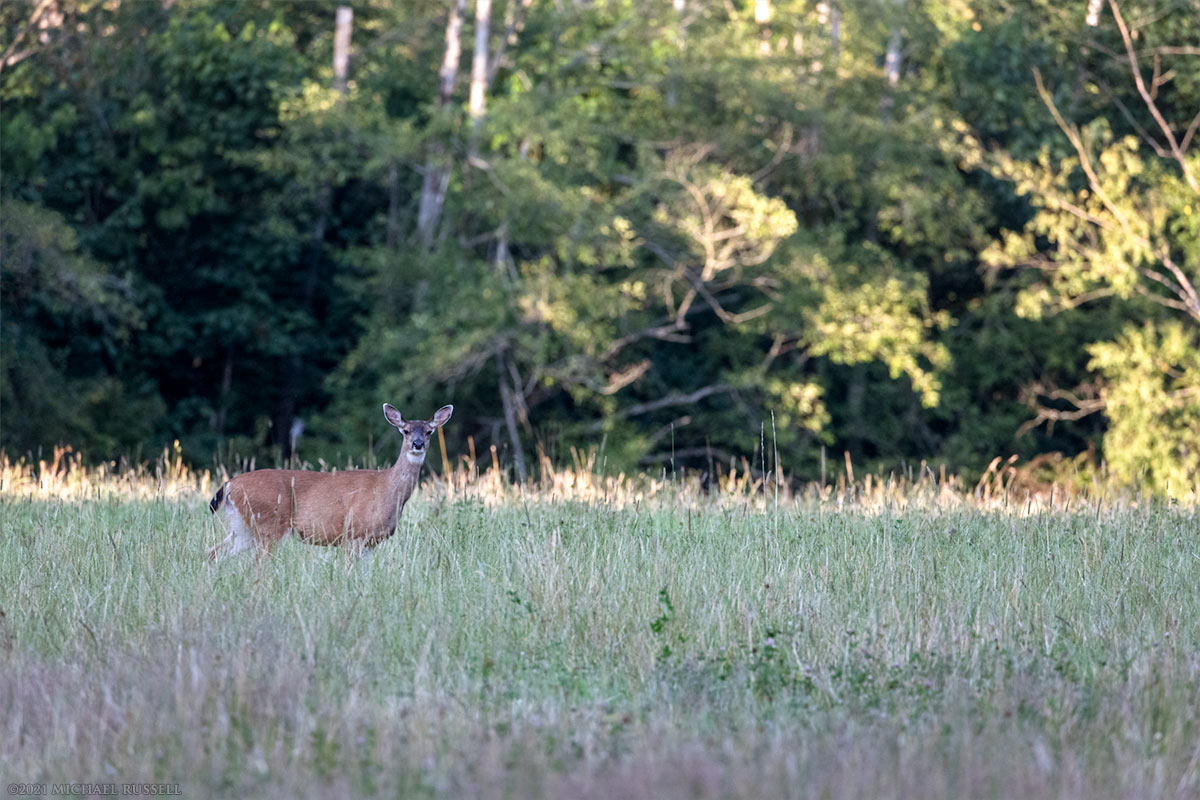 I have photographed Columbian Black-tailed Deer (Odocoileus hemionus ssp. columbianus) in Campbell Valley Park before, but this one stuck around a lot longer than previous Deer I’ve seen. This was in one of the corners of the park I haven’t visited very often. I’d previously been very close to a Coyote hunting in the same field, and the only reason I don’t have a good photo of it is that this encounter occurred when I had my widest lens on the camera. The Coyote did not stick around for a lens change. I was already using my longer lens when I came across this Deer, and instead of bounding away at first sight, it kept a slightly wary eye on me as it grazed in the field. 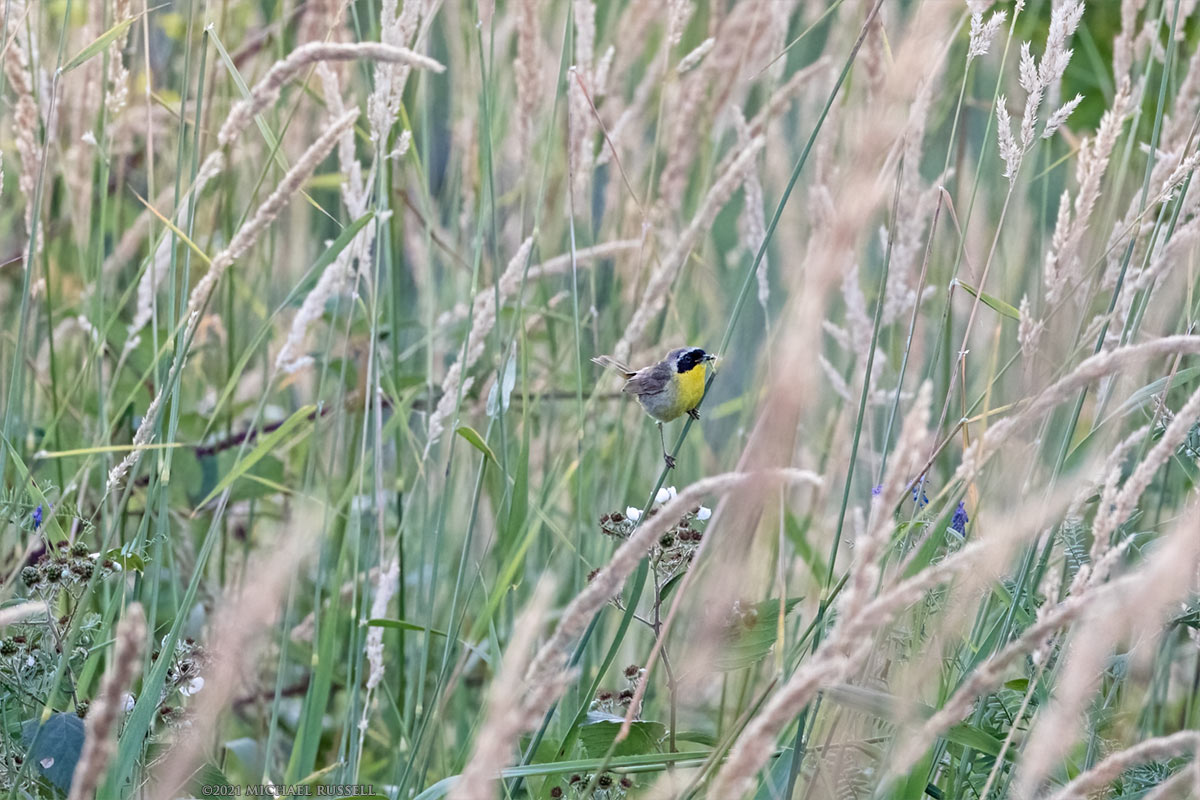 Have you ever had some disappointment in getting home after photographing or seeing a “new to you” species only to find the name starts with “Common“? Such was the case twice with photographs from this evening, first with the Common Birds-foot Trefoil above and then again with the Common Yellowthroat (Geothlypis trichas) I photographed foraging in the tall grasses. I also photographed a mustard-like flower species that I preliminarily identified as one with the word common at the beginning, but as I’m not sure of that ID I haven’t published it here.

This particular Common Yellowthroat was a bird I could hear far more than it was a bird I could see. I stuck around on the edge of the patch of tall grass and waited to see if the bird would emerge and I could make a photograph. Eventually, it moved further down the trail, and I was able to see it after maybe 5-10 minutes of just hearing its call. As you may see in the photograph this individual has caught some sort of caterpillar or grub for dinner – but was still making its call frequently. I guess birds don’t worry about talking with their mouth full.

Unfortunately there seem to be a lot of invasive species growing in Campbell Valley Regional Park. Along with the Birds-foot Trefoil and unidentified mustard, the Iris plants around McLean Pond appears to be an invasive species as well. I don’t recall having seen it flower recently, so I could be incorrect, but this appears to be Yellow Flag Iris (Iris pseudacorus). I’ve photographed Yellow Flag Iris in a few locations before (Nanaimo, Pitt Meadows) but hadn’t seen it here in Langley before. Despite the species’ ecological malfeasance (it can create large colonies in wetlands, out competing native species and creating an environment that few native species can utilize for food or habitat.) I liked the patterns made by the sword-like leaves. I also experimented and made a black and white version. 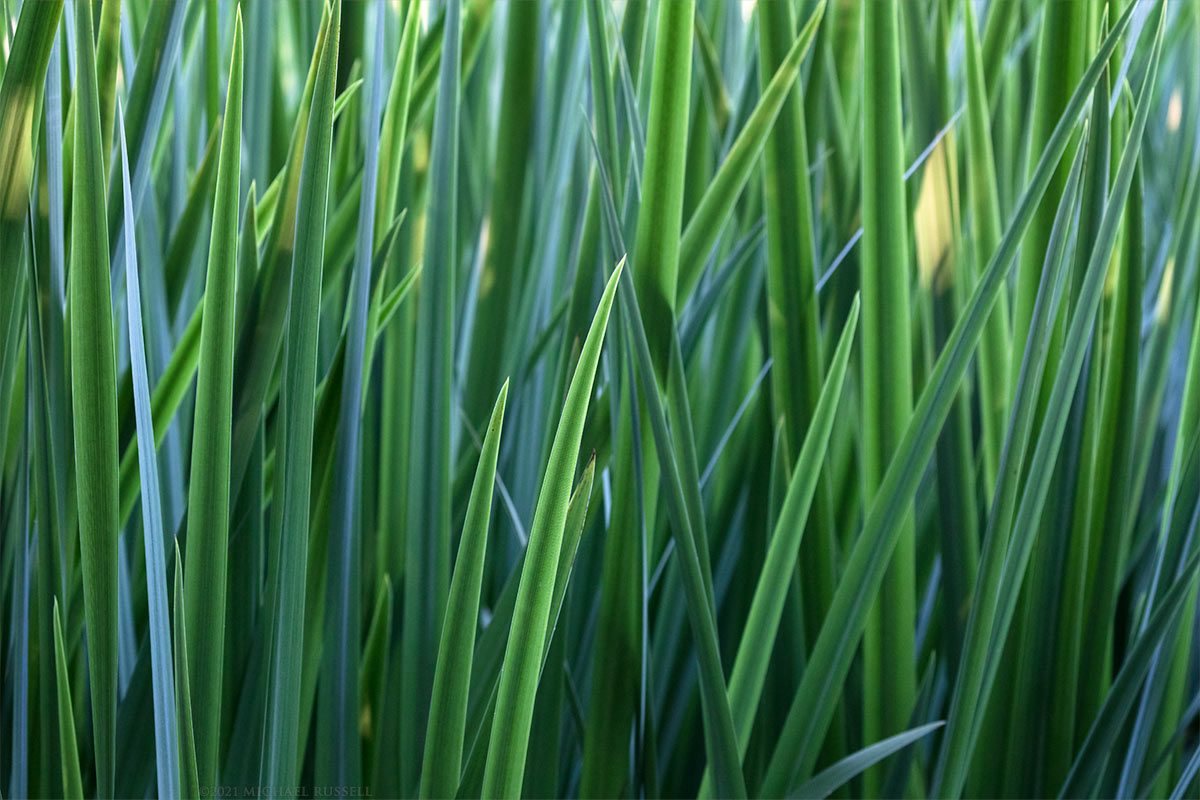 For more photographs in the park visit my Campbell Valley Regional Park Gallery.