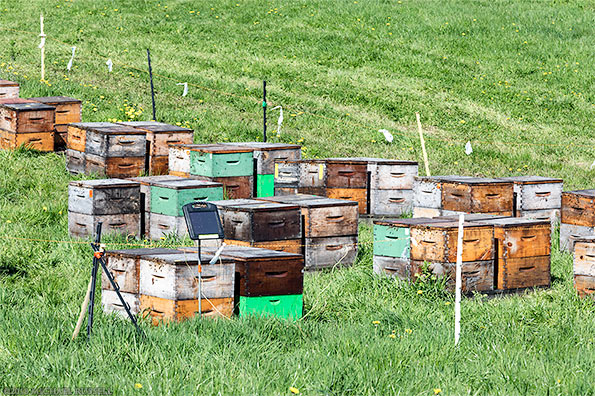 One of the things I love most about macro photography is how a small area of the backyard can suddenly yield almost infinite possibilities with a macro lens. One of my favourite macro subject are bees – and while I have shot a lot of these it can be rather hit and miss. You need a decent shutter speed as these and other insects don’t seem to sit still long while on a flower. To do this I shot at a higher ISO than usual (800 in this case), and at a wide aperture (f/6.3 for a little more DOF than f/2.8) so I could have a high shutter speed. I was also doing this hand held with a 100mm lens with no stabilization, so a shutter speed of 1/100sec would have not turned out well with just the camera shake from my hands (that 1/focal length rule). These guys dart around so much that using a tripod would drive one mad so these settings are important.

Even with settings like this there is still a lot of trial and error. So I take a lot of shots. This further illustrated to me my need to upgrade from my 2Gb CF cards – they were okay for my 30D but the 7D in RAW mode results in 22-25 megabytes for each photo. Once you start taking something other than landscapes having only 70 exposures available before switching cards is limiting.

I have occasionally seen the odd honey bee drinking water from the edge of the pond, and occasionally from the edge of the birdbath – but never en masse like they have this year. I don’t know if it is the nature of the summer weather, or the fact the neighbours have a beehive – but they have been there every day in numbers for most of the last few months. I got the tripod and my macro lens in very close to them and aside from a few buzzing around my head they didn’t much care I was there. At least they sit still on the birdbath relative to on the flowers.

Slowly getting close to catching up entirely…

Again a lot of bee photos. At least they aren’t on heather this time.