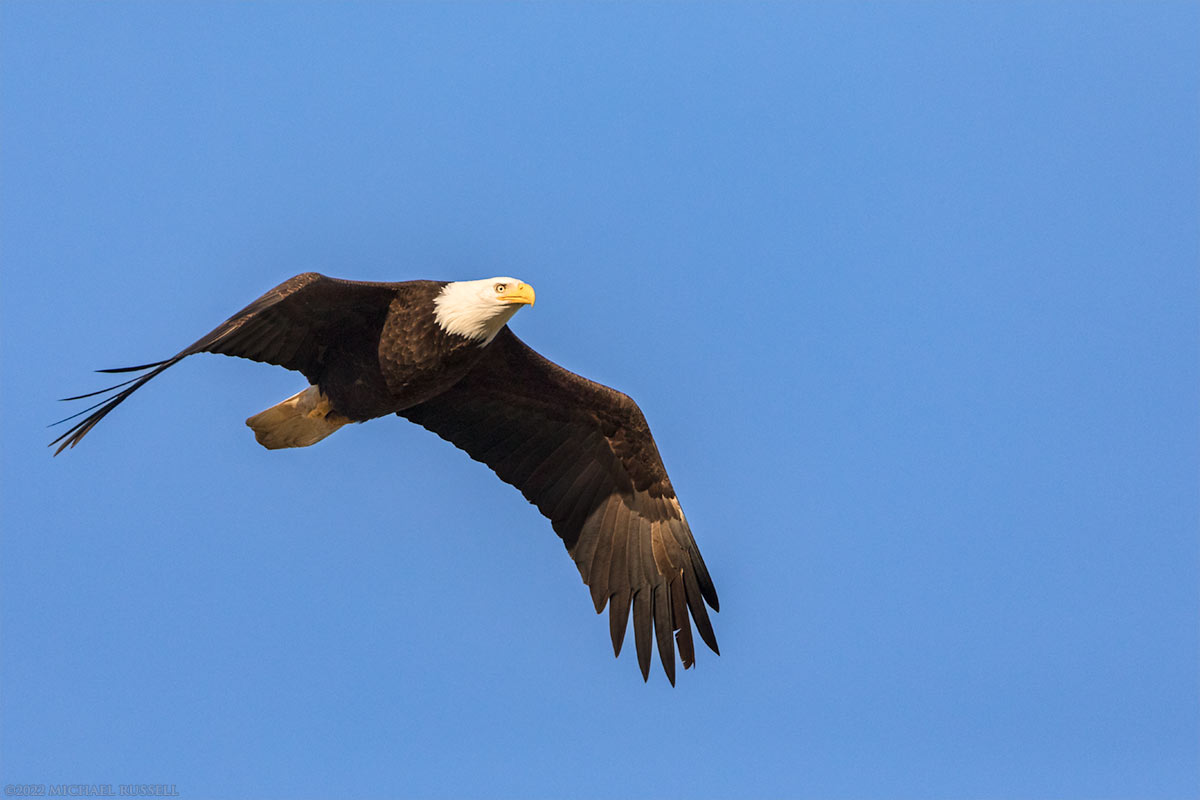 In yet another example of parks I’ve been to, but not fully explored – I ventured out into Boundary Bay Regional Park north of Centennial Beach in mid February. While I was watching some ducks forage along the edge of the tidal zone a woman who was walking by asked a question about my photography (a long lens and a tripod attracts conversation). She pointed out there was a heron just down the way and I said the words that would set the tone for the rest of the evening (and this blog post). I stated that I was mostly done photographing herons at this point as I have too many heron photos. I used Bald Eagles as another example of birds I don’t seek out intentionally unless there is something new and/or interesting about the potential photograph (there are tons of Bald Eagles around Boundary Bay). So naturally a few seconds later I made the photograph above as this adult Bald Eagle (Haliaeetus leucocephalus) flew just overhead. I don’t think I have many Eagles in flight photos, so this was something new and also worked out quite well. I should have known what was coming next.

Shortly after the Eagle incident I found this curious American Crow (Corvus brachyrhynchos) hopping along the driftwood logs on the beach. I know Crows aren’t exactly a big target of birders, with some exceptions, but they are often doing interesting things. Previously recognized as a separate species, the Northwestern Crow (Corvus caurinus) was recently renamed the American Crow. As it turned out, via some genetic studies, Northwestern Crows were usually found to be hybrids or actually C. brachyrhynchos anyway. I wish they could have renamed it the North American Crow. This individual did eventually spy a tasty morsel in the sand and flew off to enjoy it with a bit more privacy. 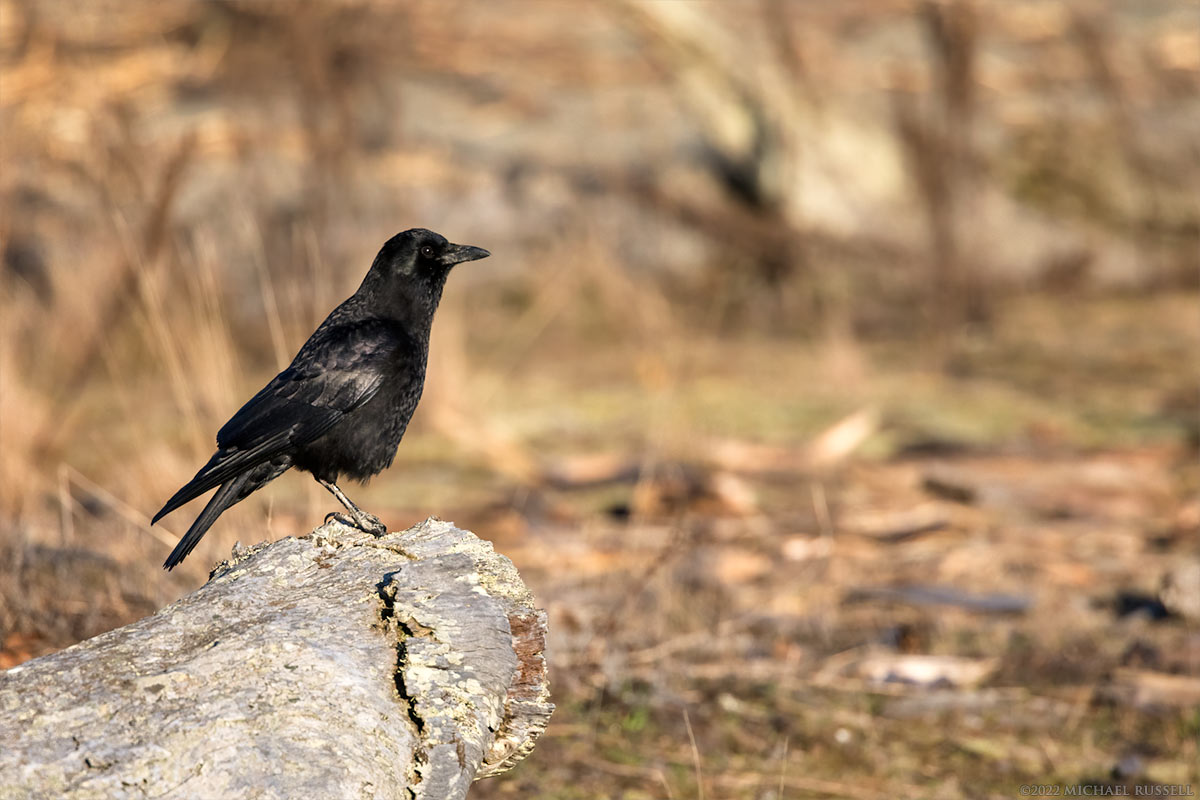 Walking down the trail from Centennial Beach I approached the Beach Grove Lagoon and Spit area of Boundary Bay Regional Park and, as one might have predicted, found some Great Blue Herons (Ardea herodias) in interesting light. As I’ve often seen them do at Blackie Spit in Crescent Beach, there were a number of Herons hanging out in a grassy field near the shore. Some were sleeping and having a nap but others were slightly more active. The warmer sunlight of the evening with the backlighting on the bird attracted me to this particular composition. I photographed this individual Heron as the feathers on its head and neck were nicely lit by the sunlight versus others who were resting in the shade. I guess one attractive thing about photographing these birds is they often tend to sit still and don’t move around a lot unless they are actively hunting. Probably why I have more photos of Herons than Swallows, for example. Despite declaring them a subject I’m less interested, I published 7 Heron photos from this evening, bringing the total in my Image Library to 42. Maybe I should just change my logo to a heron? 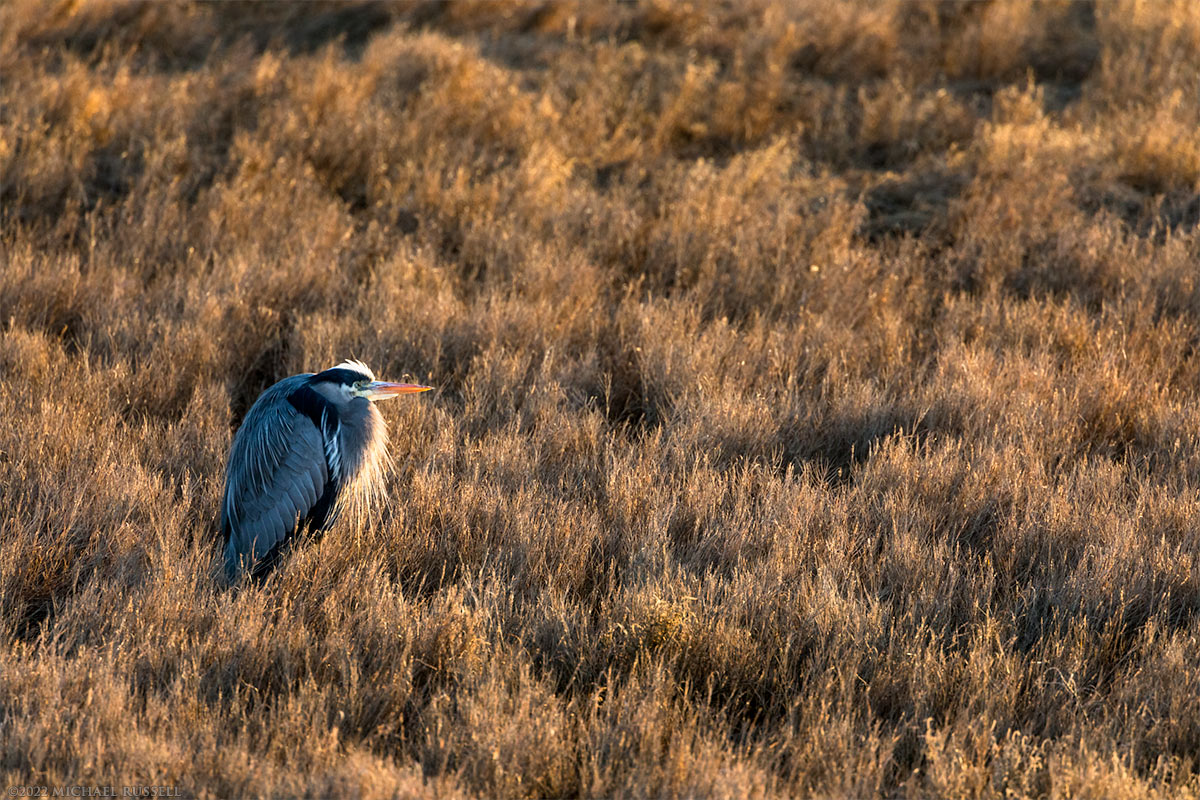 Also at the Beach Grove Lagoon and Spit was this Heron sitting on a piece of driftwood. It seemed to mostly be enjoying nap time like the Herons in the field. Occasionally it would keep a close eye on a Bald Eagle or other larger bird flying nearby. It may have been resting up for the hunt I saw it begin shortly thereafter. 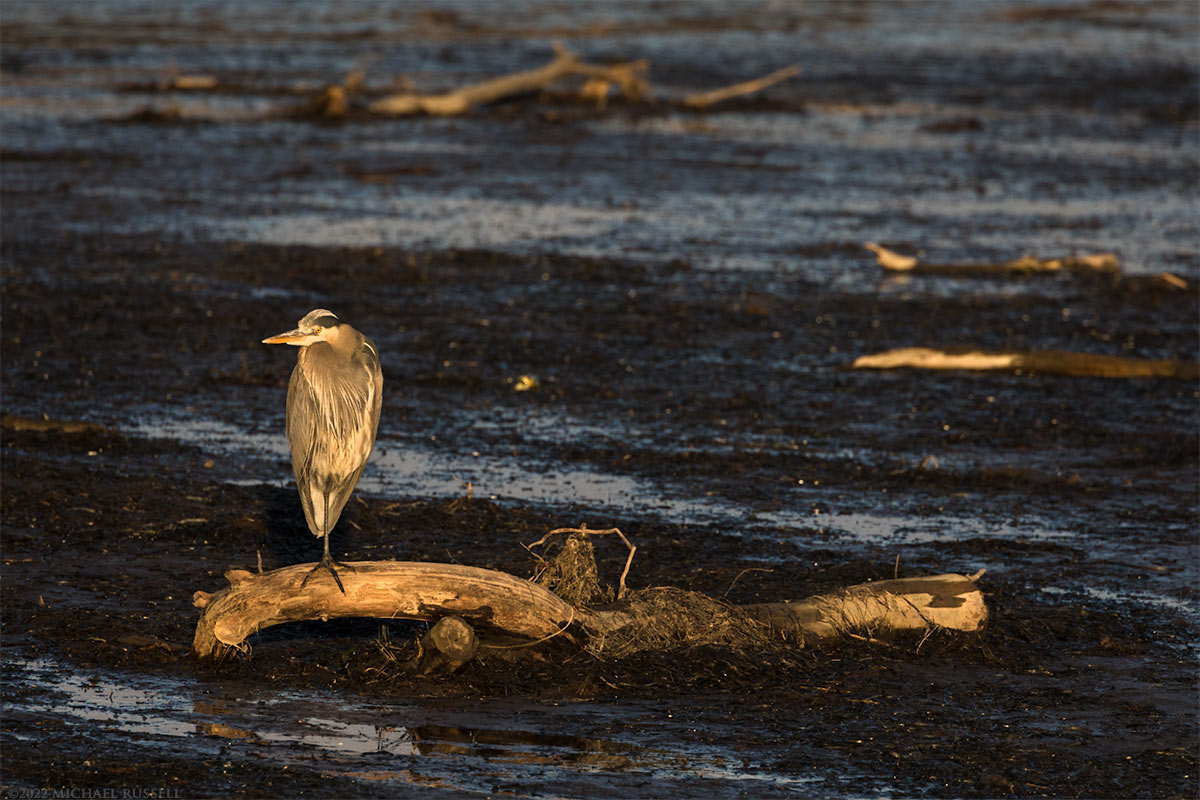 Much of Boundary Bay Regional Park is often a great place to spot a variety of shorebirds depending on the time of year. On this day in mid February there were a number of Greater Yellowlegs (Tringa melanoleuca) foraging along the shore. This one was focusing on this one area in the water, perhaps having spied something on its first pass and was hoping to snack on it this time around. When photographing this Yellowlegs I talked to a young man (~14) who was also trying to photograph the shorebirds. When I saw the Yellowlegs I got off the trail and sat down and waited for them to walk past. His tactic was to walk quickly back and forth on the top of the dike, looming in the sky (from the bird’s perspective) which often dictated their direction of movement. I mentioned this to him and that if he stood in one spot, the birds would wander past and be more relaxed while doing so. He agreed, but lamented that he just didn’t have the patience to do that. I probably wouldn’t have had it at 14 either, honestly, and I’ve see grown adults racing up and down the dike at boundary bay chasing birds too. Also of note for this 14 year old was the lens he was using. I’m pretty sure it was a Canon 800mm which retails for around $22,000 here in Canada. Must be nice (but heavy)! My car was cheaper than that when new in 2004! 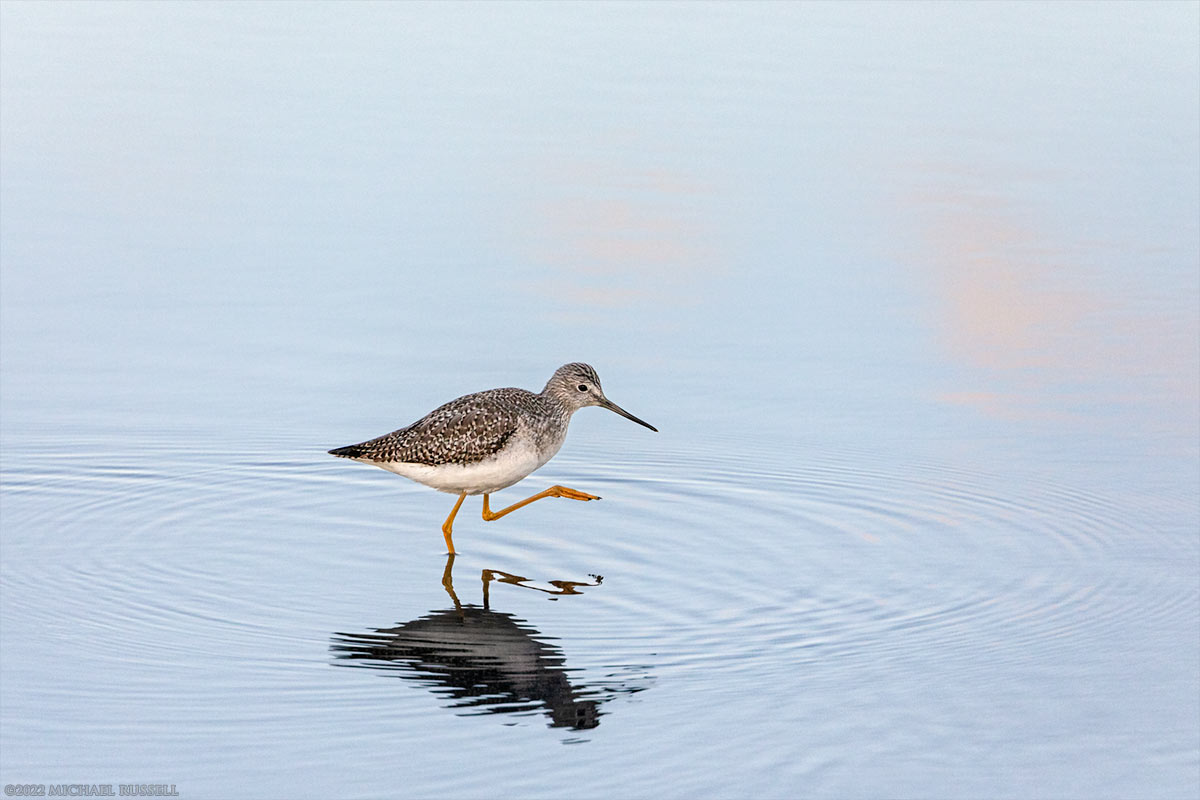 After I chatted about wildlife photography and Yellowlegs the Heron I photographed sitting on the driftwood earlier had flown a short distance to the edge of the incoming tidal water from Boundary Bay. I watched it catch several small fish before it flew to the other side of the dike to join those napping in the grass. 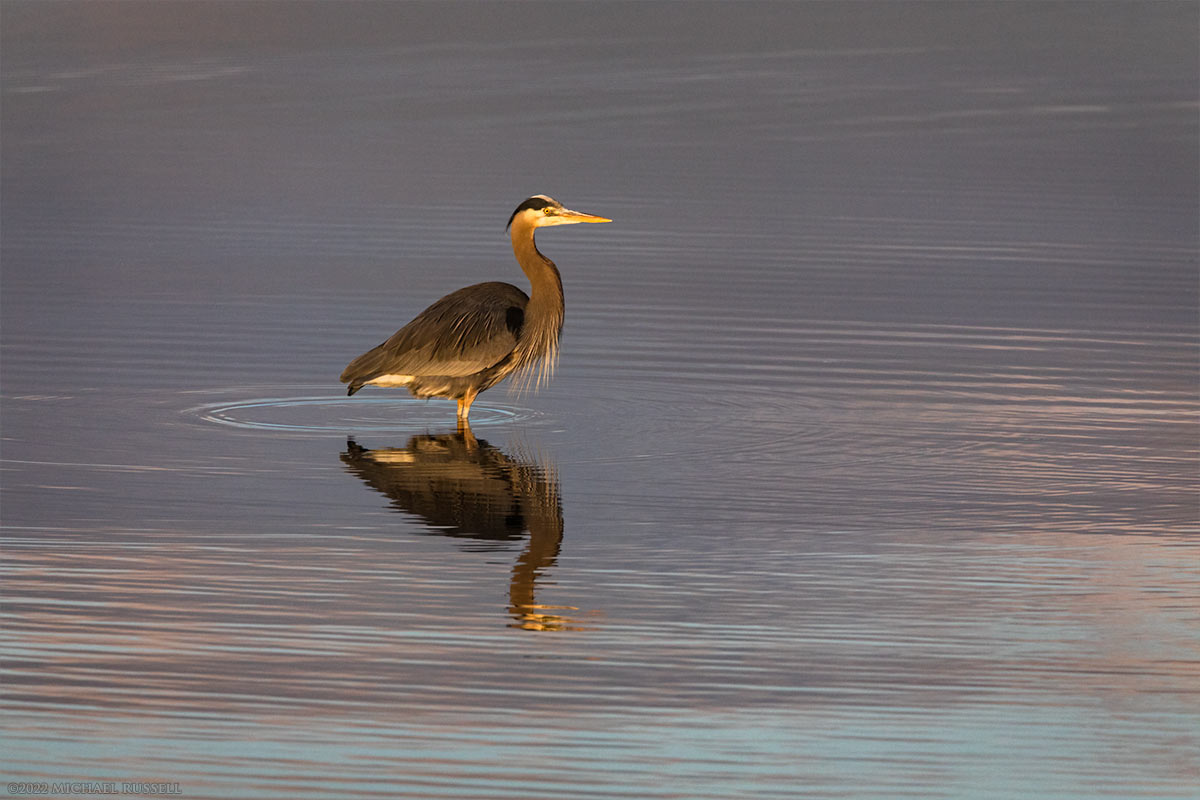 On my walk back to the car as the light became dim there were several Herons in various trees either individually or in groups. This particular Heron was perched on top of a dead Birch tree trunk that had clearly rotted to the point of breaking off at some point. There was a Flicker poking around in one of the lower parts of the old trunk, an intrusion the Heron didn’t seem to mind. Granted this was a bit less noisy than when Flickers engage in their favourite spring pastime and bang away on metal chimneys in the early morning. 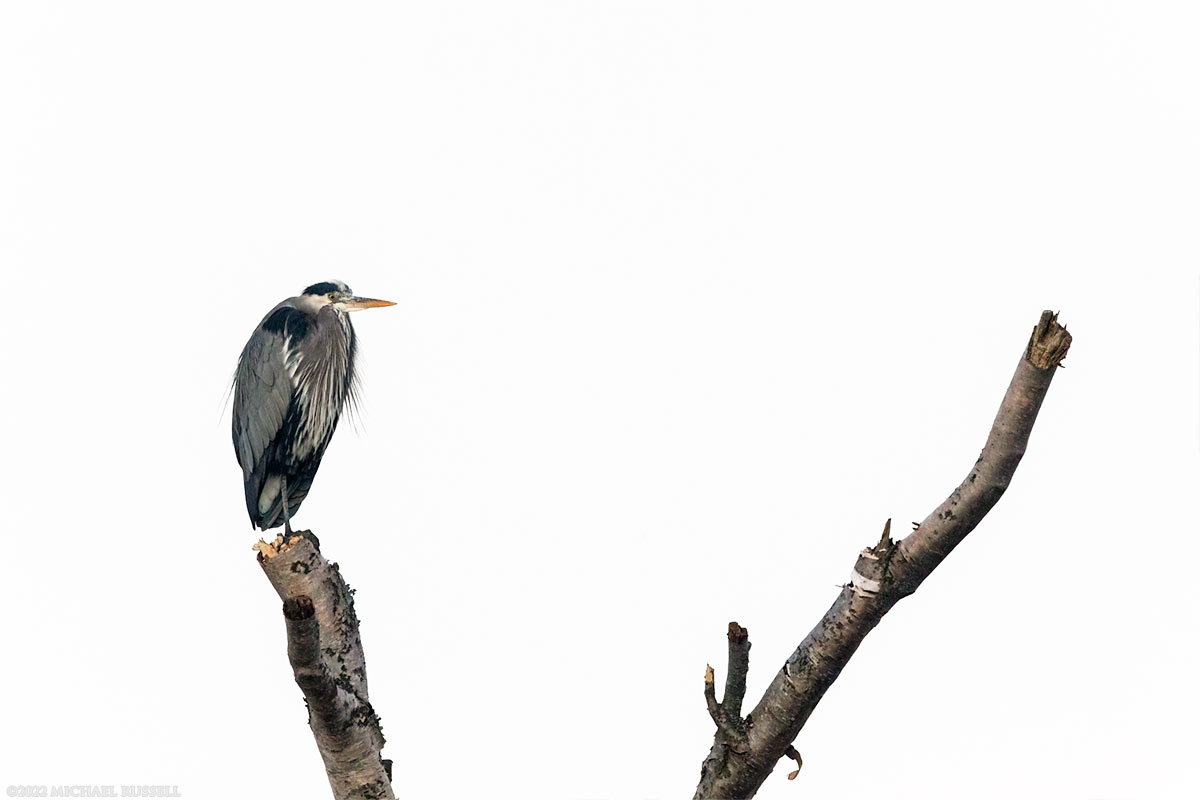 For more photographs of the Tsawwassen and Boundary Bay area visit my Delta Gallery in the Image Library. I don’t have a dedicated Heron gallery. Yet.