The peaks of the Mount Cheam Range above Fraser Valley farmland – from Hillkeep Regional Park in Chilliwack, BC. 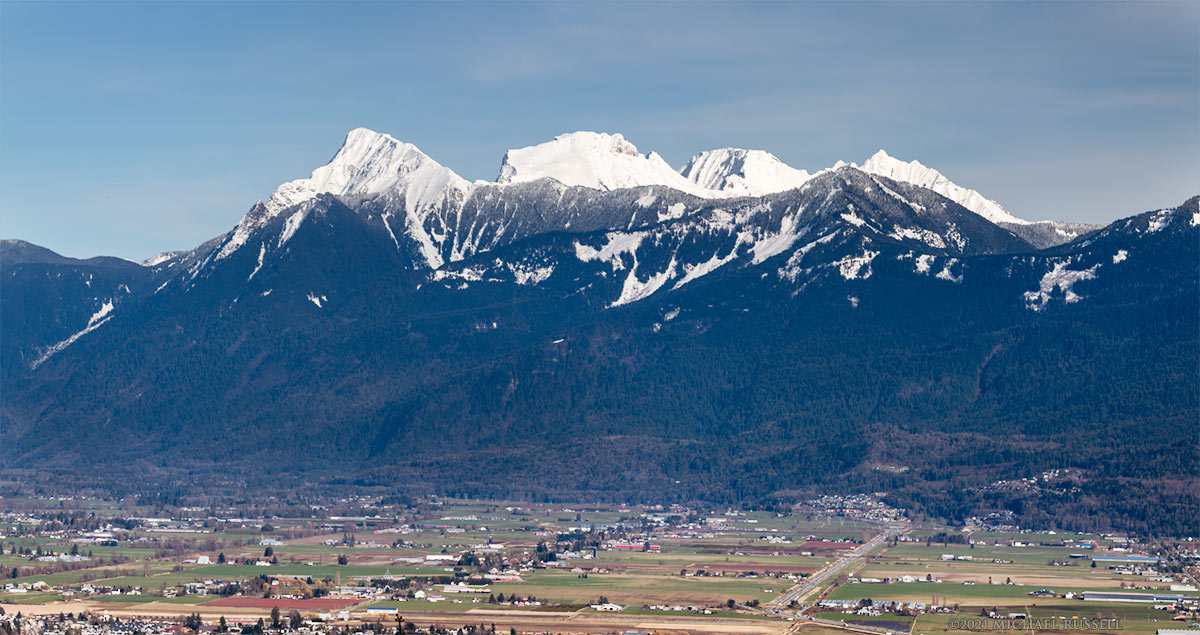 A few years ago I photographed the view from Hillkeep Regional Park (link) in Chilliwack, British Columbia. The day was cloudy and rainy, and I could barely make out the Chilliwack Airport below. It was a nice walk with a lot of lush growth in many areas but some of the trails were a bit overgrown and underused. Earlier this year after a question from a client I wanted to get some newer photographs of Mount Cheam (Lhílheqey) from a new angle. Hillkeep Regional Park (on a nice day) seemed like the perfect place to start.

The view at Hillkeep Regional Park is quite nice, and the walk up to the viewing platform is short but does require a small amount of elevation gain to get there. During some times of the year you may want to reconsider wearing bare legs as the trail can be quite close to Stinging Nettles. The first photograph above is an image I made of Mount Cheam and the peaks behind it in the Cheam Range from the viewing platform. In the lower part of the photograph you can see a mixture of farmland and houses that make up much of this part of the Fraser Valley.

Mount Cheam’s Stó:lō name is Lhílheqey (“mother mountain”) and is a significant physical and cultural feature of the valley. The peak names from left to right are Cheam Peak, Lady Peak (Dog Face), Knight Peak, and Welch Peak. Mount Archibald is in front of the Cheam Range between Knight and Welch Peaks. 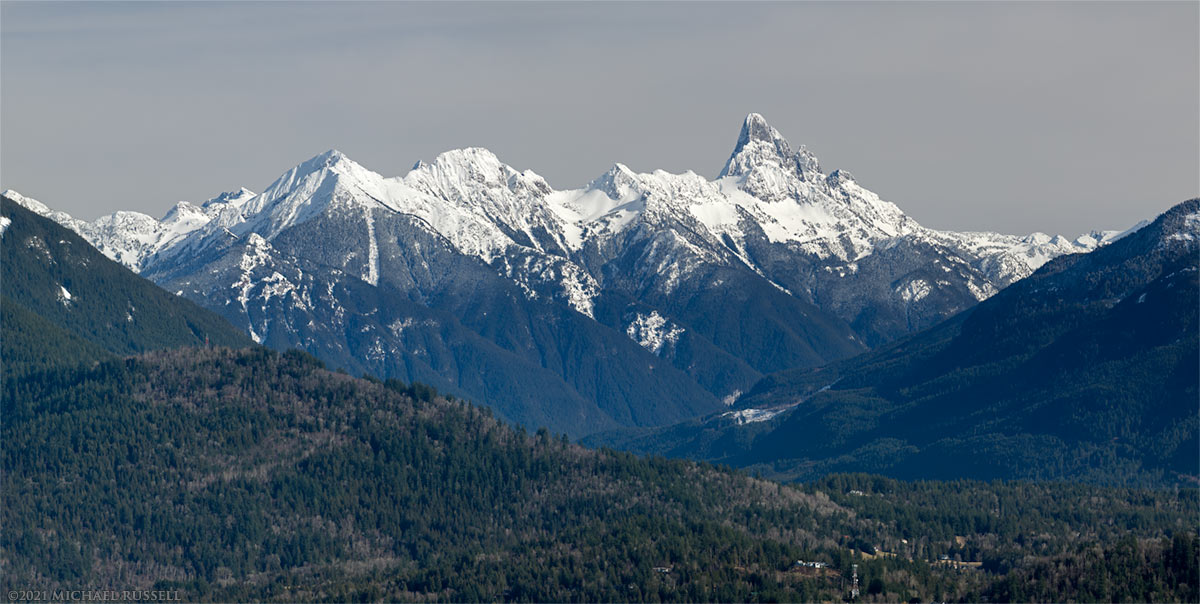 Another noteworthy (though less prominent) peak you can see easily from Hillkeep Park and nearby parts of the Fraser Valley is Mount Slesse. At the end of a small range of peaks, Slesse is the most prominent and memorable. The photo above shows (from left to right) Mount MacFarlane, Crossover Peak, and Mount Slesse after some fresh, late winter snows. The word “Slesse” means “fang” in the Halq’eméylem language. Mount Slesse is also known as the site of the crash of Trans-Canada Air Lines Flight 810 in 1956 which killed 62 people and remains the 6th deadliest in Canadian history.

From the Hillkeep lookout there is not just view of the surrounding mountains but also Highway 1 (Trans Canada Highway), the Chilliwack Municipal Airport (YCW), and a lot of housing developments and farmland. The photograph below shows a mix of all of these elements, with the airport in the foreground. The airport was fairly busy on the day I was at Hillkeep, and as a consequence many of my panoramas and photographs from this afternoon had multiple planes in them. One managed to get into almost every frame of a 10 frame panorama, which was a feat I think only a few (feathered) birds have accomplished in the past. 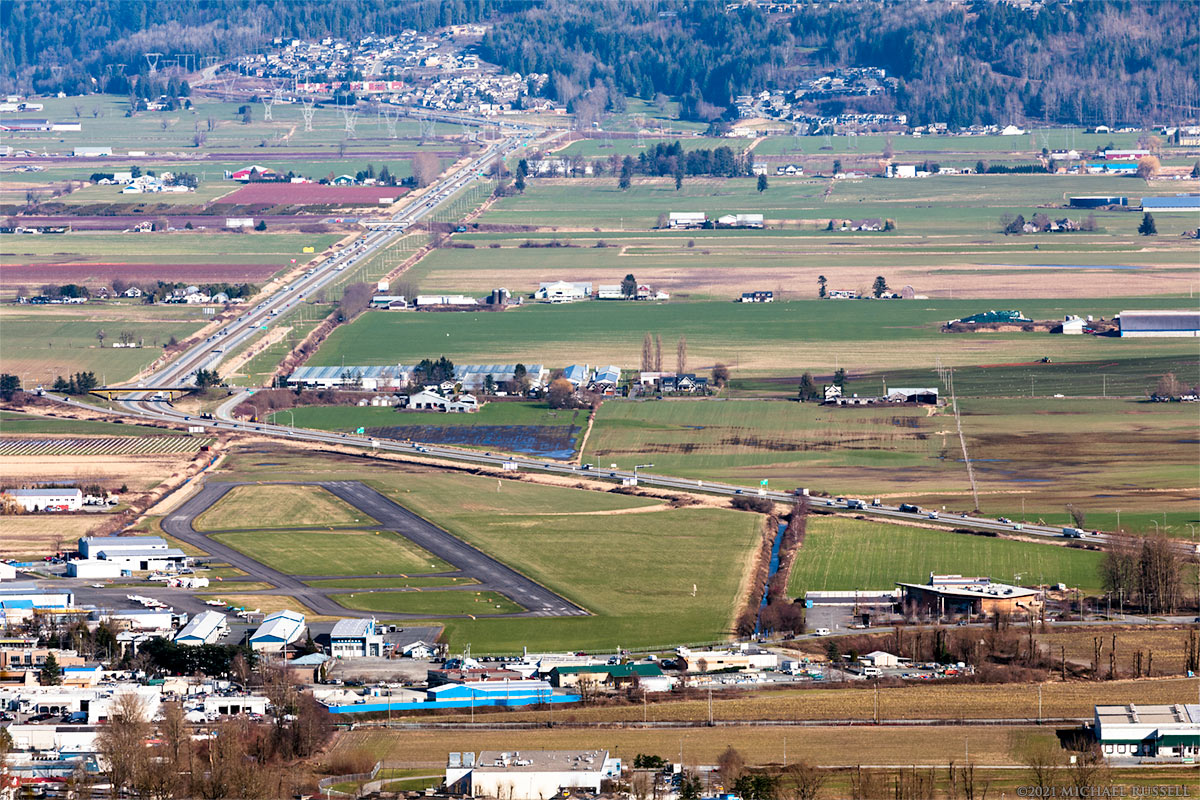 Here is a “bonus” panorama of Mount Cheam/Lhílheqey I made later in the day from Agassiz near the Fraser River. I’d classify this as a “mountain portrait” as it doesn’t have any of the surrounding land in the photograph. While I’ve made a few of these in the past I still enjoy Cheam as a subject – it is a peak with character, especially with some fresh snow.

For more photographs of these areas of the Fraser Valley visit my Chilliwack and Agassiz/District of Kent Galleries.

A flowering Cherry or Plum tree along a dike next to the Fraser River in Agassiz, British Columbia, Canada. Mount Cheam, Mount Archibald (right), and Hopyard Hill are in the background. 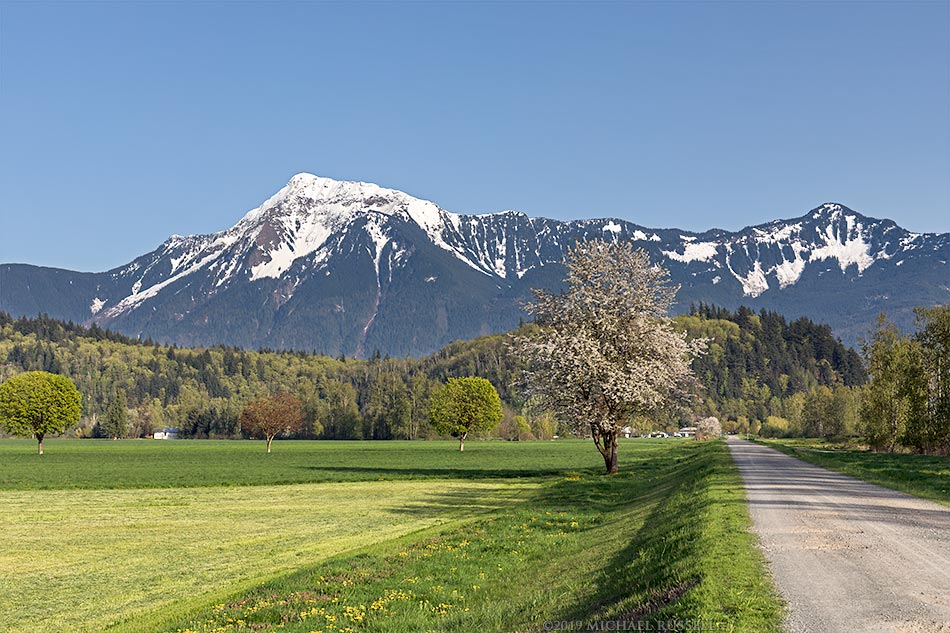 It is pretty rare in this area to find a single tree not surrounded by other trees or bush so I made a photograph of this Maple in the farm field. When they aren’t challenged by other tree species in their immediate vicinity they seem to grow to be quite symmetrical. This does not appear to be a Bigleaf Maple (Acer macrophyllum) but could be a Douglas Maple (Acer glabrum). 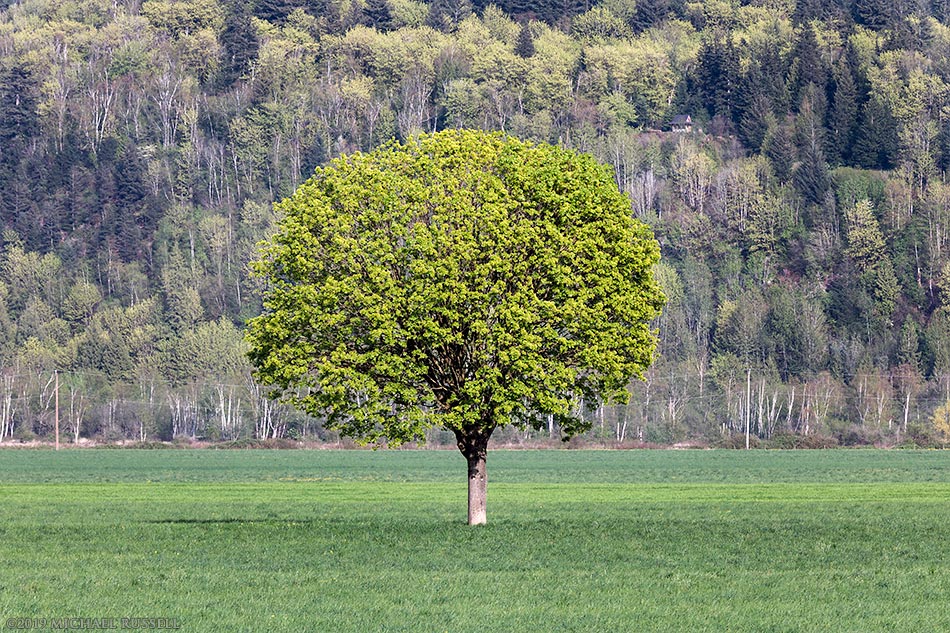 A Solitary Maple Tree in a Farm Field in Agassiz (Purchase)

After the afternoon photos above I scouted for some more photography locations in the area, and made a few photographs near the Agassiz-Rosedale Bridge next to the Fraser River. I returned to my original location in the hopes of some good evening light on the mountains but it didn’t materialize. This photograph was made after the sun had fully set. When I was making this last photograph a small airplane flew overhead, but very low, probably only 150′ or so. It turned above my head, flew over the farmland to the north, then came back and flew very close to Hopyard Hill before it banked sharply and again followed the Fraser River heading upstream. I’d have a photograph, but this is not the sort of situation where I was able to change lenses and settings in the 30 seconds of availability of the subject! I’m mostly just happy it didn’t run into the hill, which from my perspective certainly looked possible! 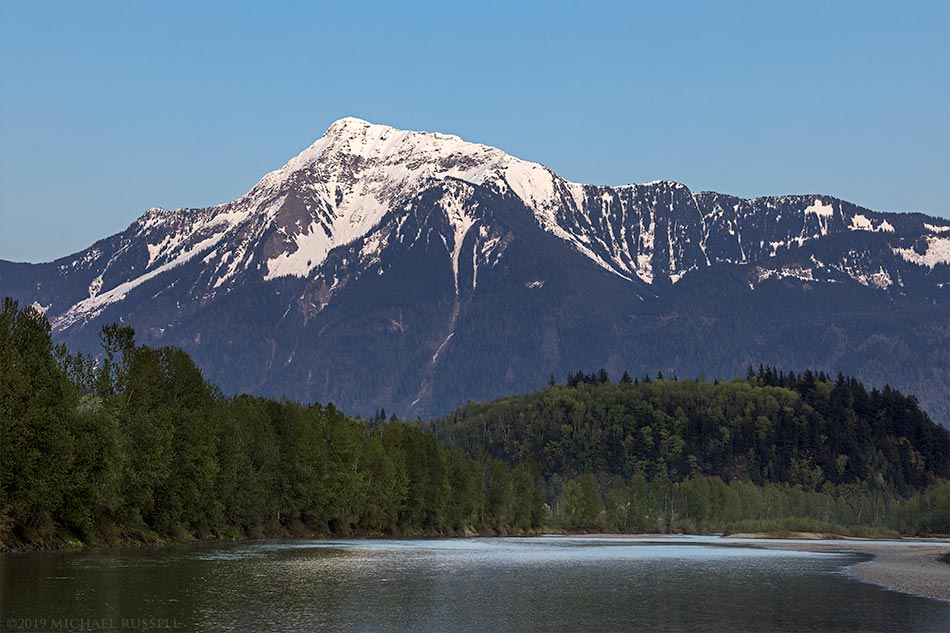 Mount Cheam and the Fraser River in Agassiz (Purchase)

For more photographs of the Agassiz area visit my Agassiz – District of Kent Gallery. 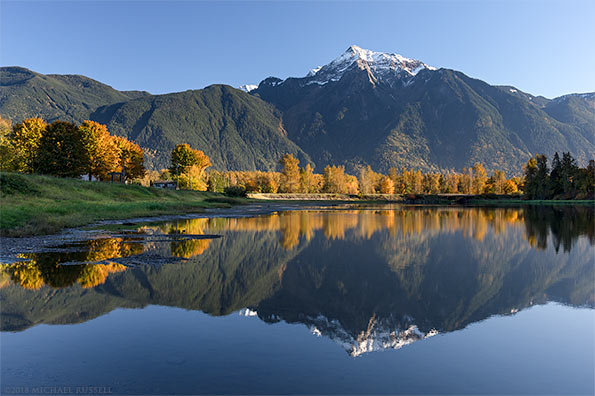 As you’ve probably noticed fall is my favourite season, so I’m going to post a few photos from the 2017 season before I make new ones for 2018. Mount Cheam (Stó:l? name Lhílheqey “mother mountain”) can be seen from most points in the Fraser Valley (and further west). I’ve viewed Mount Cheam from Seabird Island on many occasions but I don’t often get the right conditions for good photographs. Either the mountain is hidden behind the clouds or more frequently Maria Slough doesn’t have a lot of water in it and the reflections aren’t quite like they are above. So it was good to see great fall foliage, a clear view of the mountain, and a great reflection in Maria Slough during this stop at Seabird Island. I also have a vertical composition of this scene.

I was not aware of the name of Maria Slough until recently when it was mentioned as a potential barrier to the Mount Hicks Fire spreading onto Seabird Island. The fire has since been contained, thankfully. I’ve also had my eye on this Bigleaf Maple tree (Acer macrophyllum for a few years – but was never driving by when it had good fall leaves and Maria Slough was full of water. On this day I found what I was looking for and made this panorama including the Maple tree and some of the surrounding shoreline.

You can see more photos of the Agassiz area in my Agassiz – District of Kent Gallery. 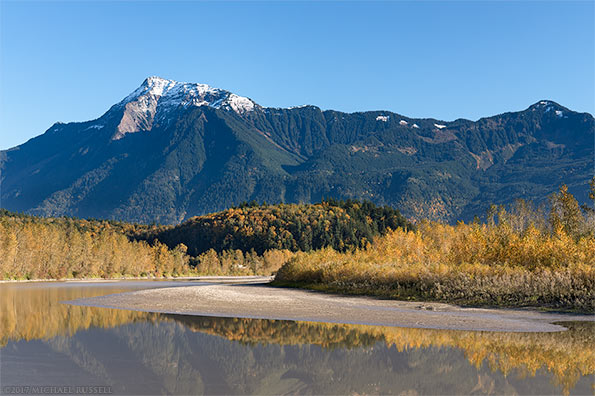 Mount Cheam and the Fraser River in Agassiz (Purchase)

Mount Cheam (Lhílheqey) is a familiar sight to anyone who drives through almost any part of the Fraser Valley and looks towards the east. Once you reach the eastern sections of Chilliwack Cheam really starts to command your attention in the sky. I’ve photographed Mount Cheam and the Cheam Range from a number of locations but I always thought there just had to be some way to get the Fraser River, or any river really, in the foreground. During one of my trips deeper into the valley this fall I decided to turn onto a side road I’d passed on many occasions heading towards Agassiz. Turns out, this was pretty much the sort of location I was looking for. The photograph above (also the cover photo of my 2018 Calendar) has all the elements I was looking for: Mount Cheam, the Fraser River, and some good fall foliage colors! Most of the trees providing fall foliage along the banks of the Fraser River here are Black Cottonwood (Populus trichocarpa). The colorful trees on the hill in the middle of the photo are predominantly Bigleaf Maples (Acer macrophyllum). 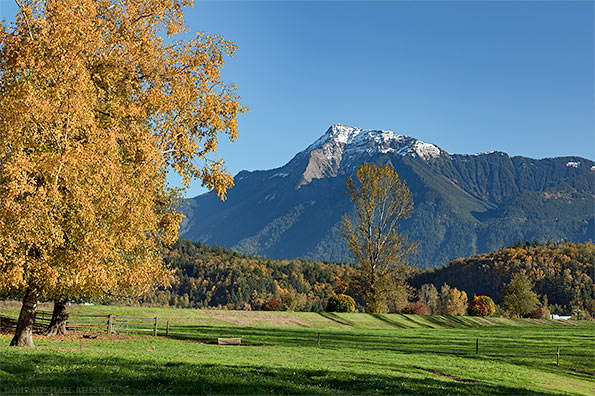 The area I found with new (to me) views of Mount Cheam in Agassiz is mostly farmland. I’m sure on a return visit there are some good views with a barn in the foreground, though the more southern part of Chilliwack has many of those opportunities as well. I had been heading to Harrison Hot Springs after photographing the first location, but saw the fall foliage provided by these two Paper Birch (Betula papyrifera) trees and had to pull over again for a few more photographs. I am looking forward to visiting this spot in other seasons to see what it has to offer in different conditions. 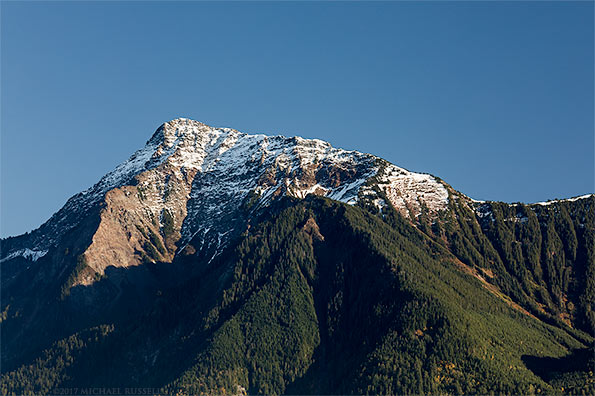 Visit my Fraser Valley gallery for more photographs from this area and more.