When I visit Vancouver Island or Salt Spring Island, I’m almost always on the ferry deck during the trip. Even in poor weather, the view from there is much nicer than from inside the ship, and I tend to walk around too. During Covid there has been a lot more people on deck than before, but most people still seem to be inside even when the weather is nice and warm. I usually have a camera in my hand when on the deck, and I thought I’d share a few recent photos from the trip between Tsawwassen BC and Salt Spring Island via Victoria (Swartz Bay).

The first photograph below is from Active Pass which connects the Straight of Georgia to Trincomali Channel in British Columbia’s Southern Gulf Islands. This is the Spirit of British Columbia on its way to Tsawwassen, passing my ferry on the way to Victoria. Mayne Island is in the background. Active pass is no longer a route for shipping traffic. There was a recent controversy with a fully loaded oil tanker transiting Active Pass near the ferries, which people did not take kindly to. The area is quite narrow and has history of bad outcomes with shipping traffic. In 1970 the Russian freighter Sergey Yesenin collided with the Queen of Victoria, killing 3 passengers. After the oil tanker used the pass in 2021, the the Pacific Pilotage Authority banned the practice. That said, I enjoy the Active Pass part of the journey. There are a lot of waterfront homes to look at, often some wildlife, and there is often another BC Ferry passing nearby as well as smaller vessels. The photograph below shows the BC Ferry Spirit of British Columbia passing my ferry in Active Pass with Mayne Island in the background. 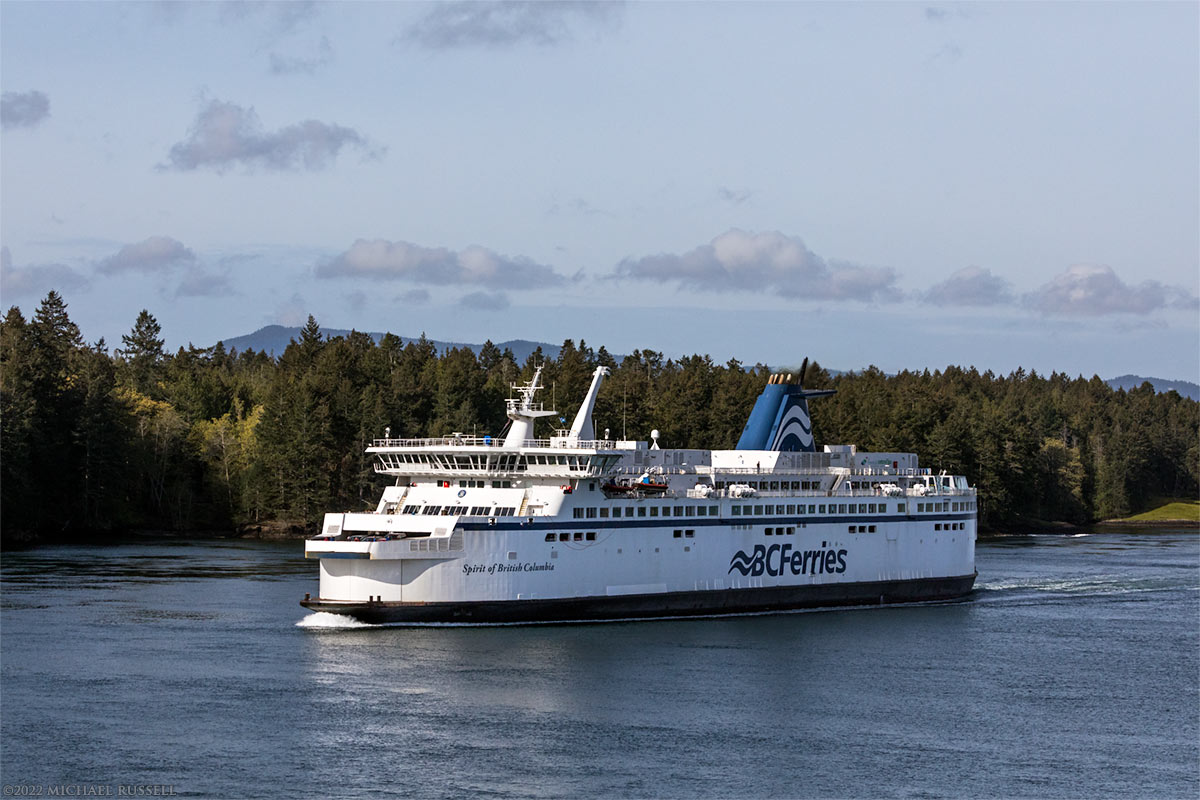 BC Ferry Spirit of British Columbia in Active Pass (Purchase)

I’m sure those of you who have taken the Active Pass route on multiple occasions are familiar with this waterfront home with a nice view on Galiano Island. I made this photograph due to all the Gulls feeding off whatever foodstuffs have been churned up by another passing ferry. Active Pass can be a good place to spot wildlife, with seals, gulls, Orcas, and Bald Eagles as frequently spotted species. 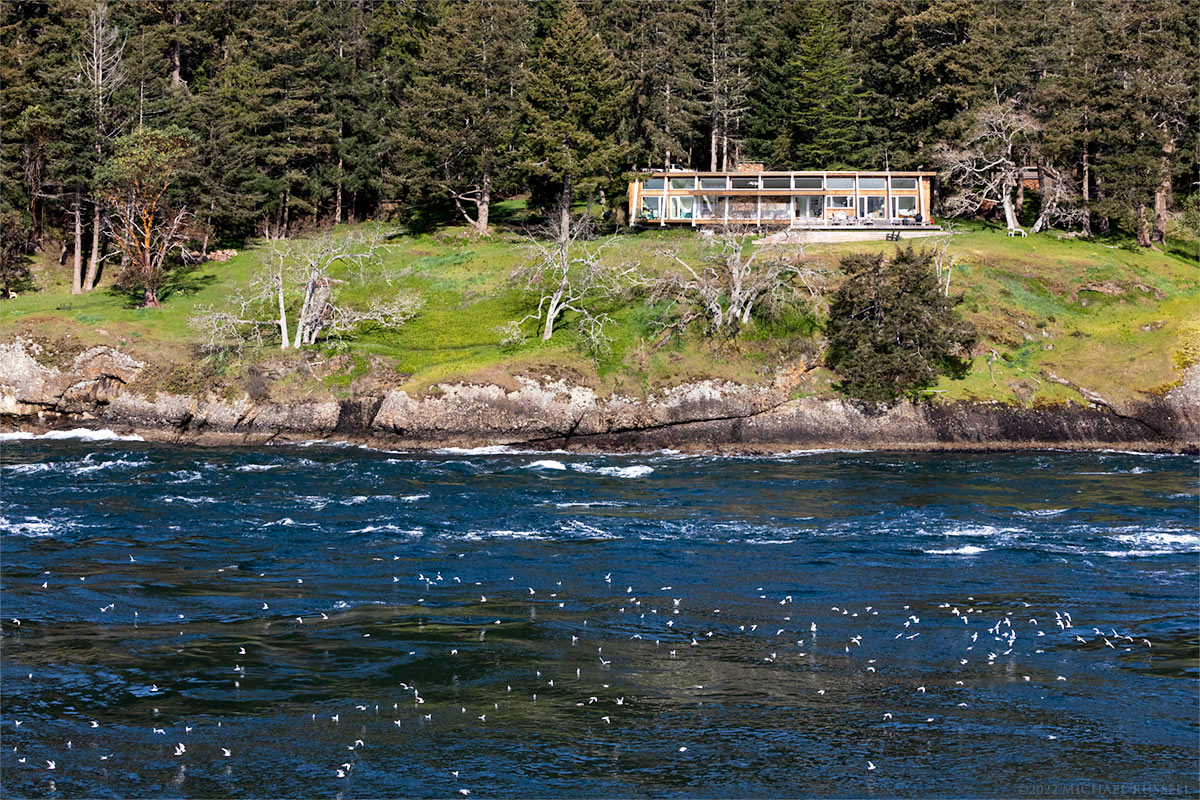 At the eastern entrance to Active Pass is another structure many will be familiar with – the Active Pass Lighthouse (also known as the Georgia Point Lighthouse) on Mayne Island. The lighthouse at Georgia Point was built in 1969 and is in what is now called Georgia Point Heritage Park. The Lightkeeper’s house was built in the 1940’s. This northeastern point on Mayne Island has been a light station since 1885, and has been home to 3 different lighthouses in that time. 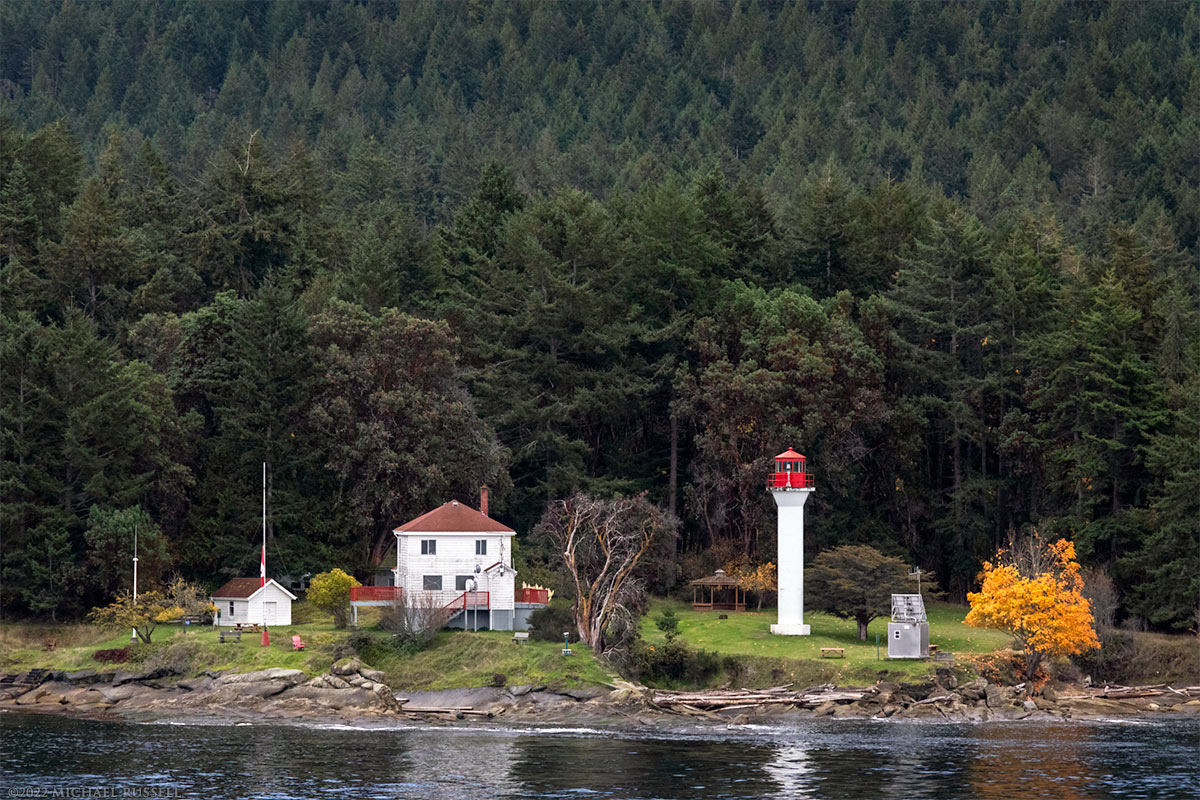 Much of the trip between Tsawwassen and Swartz Bay in Victoria winds its way past many of the Southern Gulf Islands of British Columbia including Mayne Island, Galiano Island, Prevost Island, North Pender Island, and Salt Spring Island. Salt Spring is often my destination, and is the largest of the islands in the area. A short 30 minute ferry ride from Swartz Bay to Fulford Harbour on Salt Spring has some nice views as well, and I’m usually looking off the side of the much smaller ferry that completes this trip. This is the view looking back at Mount Maxwell and Fulford Harbour on the passenger/vehicle ferry Skeena Queen having just left Fulford Harbour.

This photo was made just east of Active Pass showing the Spirit of Vancouver Island about to pass the ferry I was on at the time. The mountains in the background are Crown Mountain and Grouse Mountain. Always interesting in a photo like this to see that the buildings along the water in the background are missing the lower parts, due to the curvature of the earth (they are approximately 35km away). 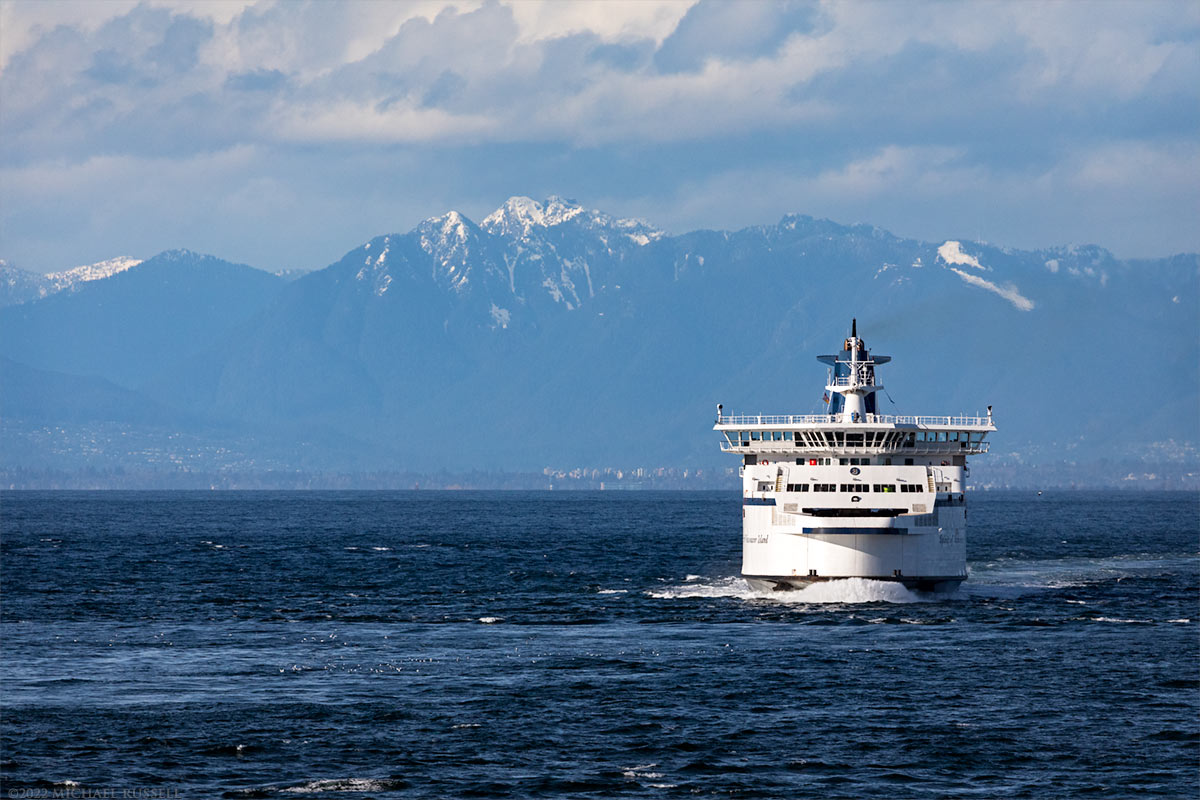 BC Ferry Spirit of Vancouver Island in the Salish Sea (Purchase)

While I have yet to visit Mayne Island I have looked at some of the attractions on the island from the ferries. In addition to the Active Pass Lighthouse I usually keep an eye out for the Springwater Lodge shown below. The Springwater Lodge was established in 1892 at Miner’s Bay and became a common stopover spot for mine workers heading to the Fraser River and Caribou Gold rushes.

I often photograph other boats from the ferry and sometimes I am able to find some information on them when editing the photographs later. This particular sailboat is named “The Westerly” and is a Santa Cruz 70 racing yacht I photographed off the coast of Vancouver Island in Satellite Channel near Swartz Bay – with Cobble Hill in the background. “The Westerly” has competed in races such as the Pacific Cup in the past. 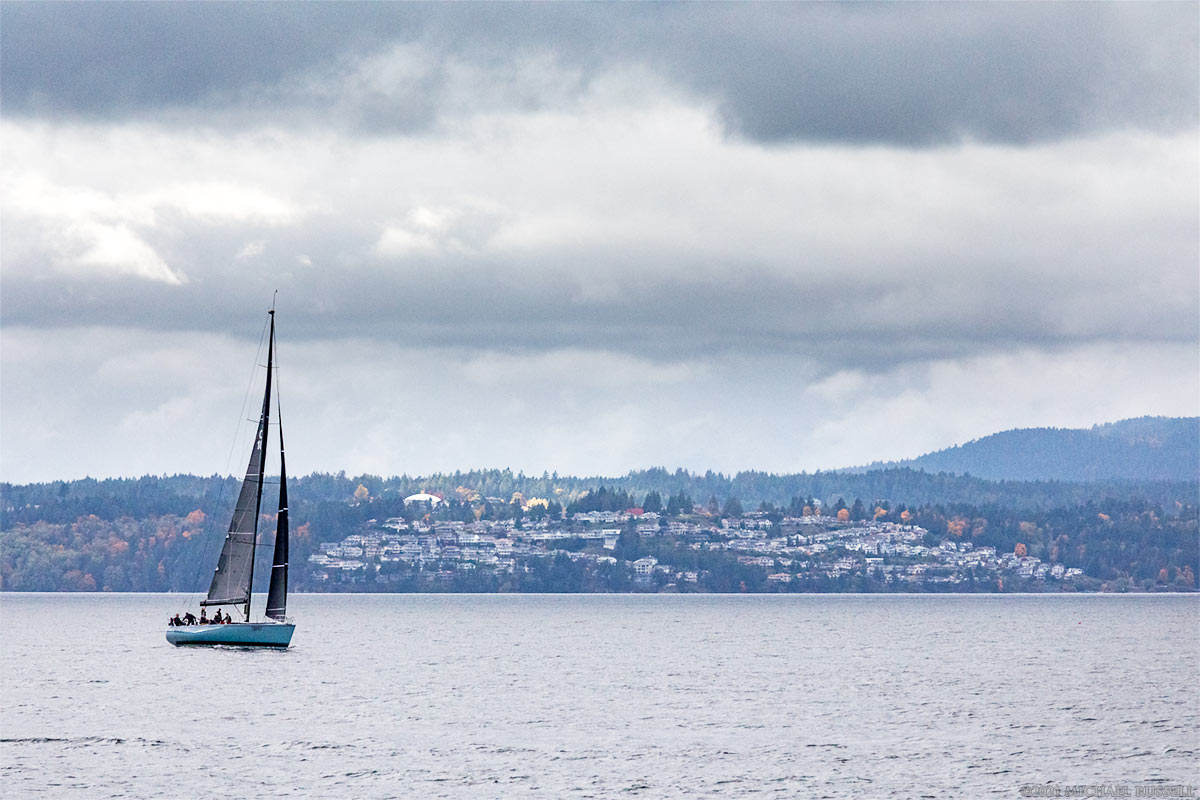