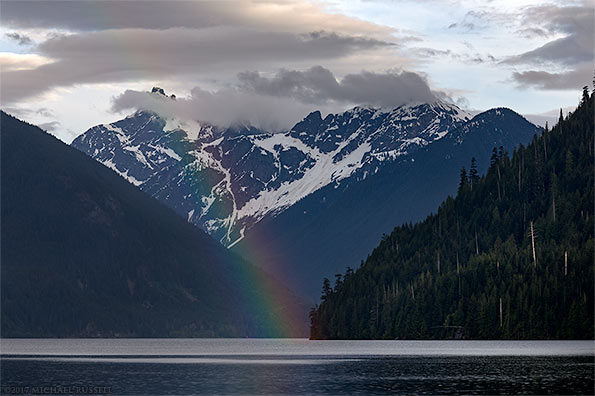 A few years ago I would have categorized this photograph of a rainbow at Chilliwack Lake as “lucky”. The day I made this photo I had slowly worked my way towards Chilliwack Lake while exploring and photographing various points along the way in the Chilliwack River Valley. I’d run into the odd patch of rain, and that was okay as this was supposed to be a day of photographing rivers and those “in the forest” photographs that benefit from a lack of direct sunshine. When I pulled into the day use parking lot near the boat launch at Chilliwack Lake I was hungry – I really wanted to just sit and eat my soup for dinner. The sky had dark clouds and it was raining lightly. My soup beckoned from the thermos in my car’s trunk. Instead, I got my tripod and gear together and walked down to the shore of the lake just to make sure I wasn’t missing something. I jogged at the end of that walk. The way these things used to go is I’d sit in my car and enjoy some soup or whatever I was eating for dinner. I’d get my gear, head down to the water and I’d run into a few people walking back up asking if I’d witnessed the rainbow. I hadn’t – I’d only witnessed soup. So this photograph exists because I’ve learned soup can wait but meteorological phenomena won’t. It also helps curtail the sting of people asking if I’d seen that Bald Eagle fishing, one cloud lighting up way after sunset, the double rainbow – all things I’ve missed in the past by not just getting out of my car and having a quick look around.

Now I categorize photographs like this one as a success due to learning to look around and make sure there isn’t something I might be missing when I would rather be eating instead. There were actually 3 rainbows here when I came within sight of the lake. A double rainbow so the south (the one I photographed, but it had faded by then) and another to the east. It was quite a sight – but I had to decide quickly what to photograph. I made one wider shot of the lake trying to get both rainbows in the same photo. That might have succeeded, but it wouldn’t have been a good photo, so I switched to a longer lens and made this photo which had the most important subjects. The lake, the rainbow, and one of my favourite mountains. With the dark clouds the rest of the scene was somewhat gloomy, but the rainbow helps balance that I think. 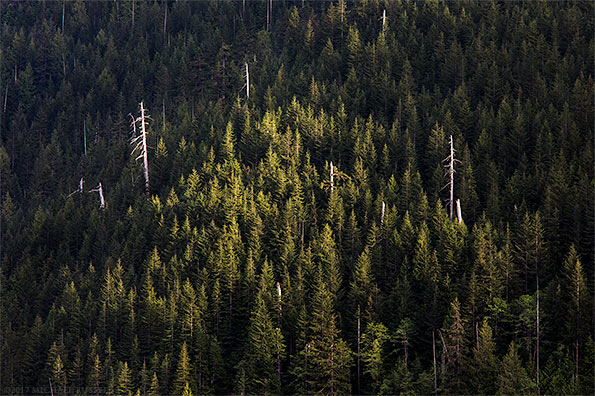 Spotlight on the Forest at Chilliwack Lake (Purchase)

The second photograph here was made 2 minutes after the rainbow photograph. The rainbows had all completely faded but this one spotlight of sunshine lit up the forest and dead snags on the hillside below Mount Webb, but only for a minute or so. If I hadn’t had the longer lens on my camera for the first photo here I might have missed this. I think this part was a a bit of luck.

This photograph (as well as the first) bring to mind another piece of advice I often hear for photographers – if it is suddenly stormy, that is when to go out and photograph. This isn’t bad advice, but I do believe some of the accuracy is predicated by where one lives. I’ve always lived in this corner of British Columbia, so weather patterns elsewhere are a bit of a mystery. Here, however, once it starts raining you can wait days (or weeks) until it stops or a spot of sunlight makes its way through the clouds. I imagine in other places storms come and go quickly, so getting out when a storm starts is perfect timing. Here, rushing out to photograph when it starts raining here may just get you wet. If I were to make a BC rainforest amendment to that “rule” I’d say the perfect time to go out is on a day when there are expected intermittent showers and maybe some sunny breaks. That is the kind of day where the above photographs were created, and when I’ve seen most of these kinds of scenes. So there.