Raven Peak with fall foliage from the Pitt Polder Dike near Heron Cove and the Smohk’wa Marsh in Pitt Meadows, British Columbia, Canada. 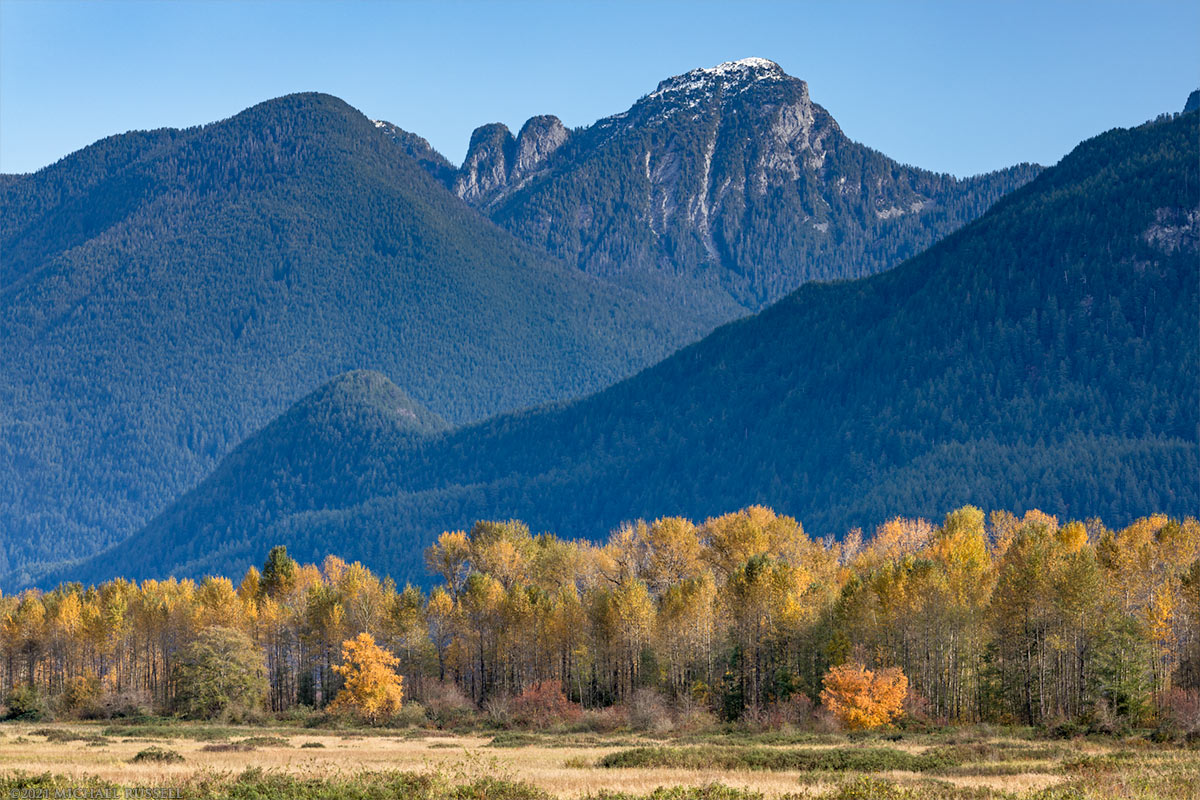 This is the first part of a series of posts about the Pitt River and Pitt Lake area where I photographed this fall. 2021 was a relatively spectacular year for fall foliage in this part of British Columbia, giving me a lot of potential opportunity to try to photograph in my favourite fall foliage conditions – sunshine. I like fall leaves in almost any weather aside from a downpour, but when they are hit by some sunshine they can really light up in great ways. It was fortunate the Maple tree fall foliage was good this year, and was followed by many weeks of great foliage in the Cottonwoods and Birches, because the weather was very very wet. The southern part of British Columbia had an endless string of rain storms starting in October and ending (so far) just last week. More than one of these were quite damaging and caused record flooding and highway damage. So finding time to get out and photograph when it wasn’t pouring rain was difficult, and doing so with a rare sunny break even more so.

On this particular day, I had planned to do some photography closer to Vancouver but instead headed straight north to the Pitt Lake area in Pitt Meadows. The clouds made an early appearance on what was supposed to be full day of sun. So I managed to outrun the cloud advances from the south, and had over an hour to photograph with some sunny breaks. Some of the place names for this area can get confusing with multiple names being used, some official, some not. I made the photograph above next to the Smohk’wa Marsh from the Pitt Polder Dike (as per the city of Pitt Meadows) between Heron Cove and the boat launch area at Pitt Lake/Grant Narrows. I liked those two colourful Paper Birch trees (Betula papyrifera) and walked a bit to line then up on either side of Raven Peak above. This image is the September photograph in my 2022 Nature Calendar. 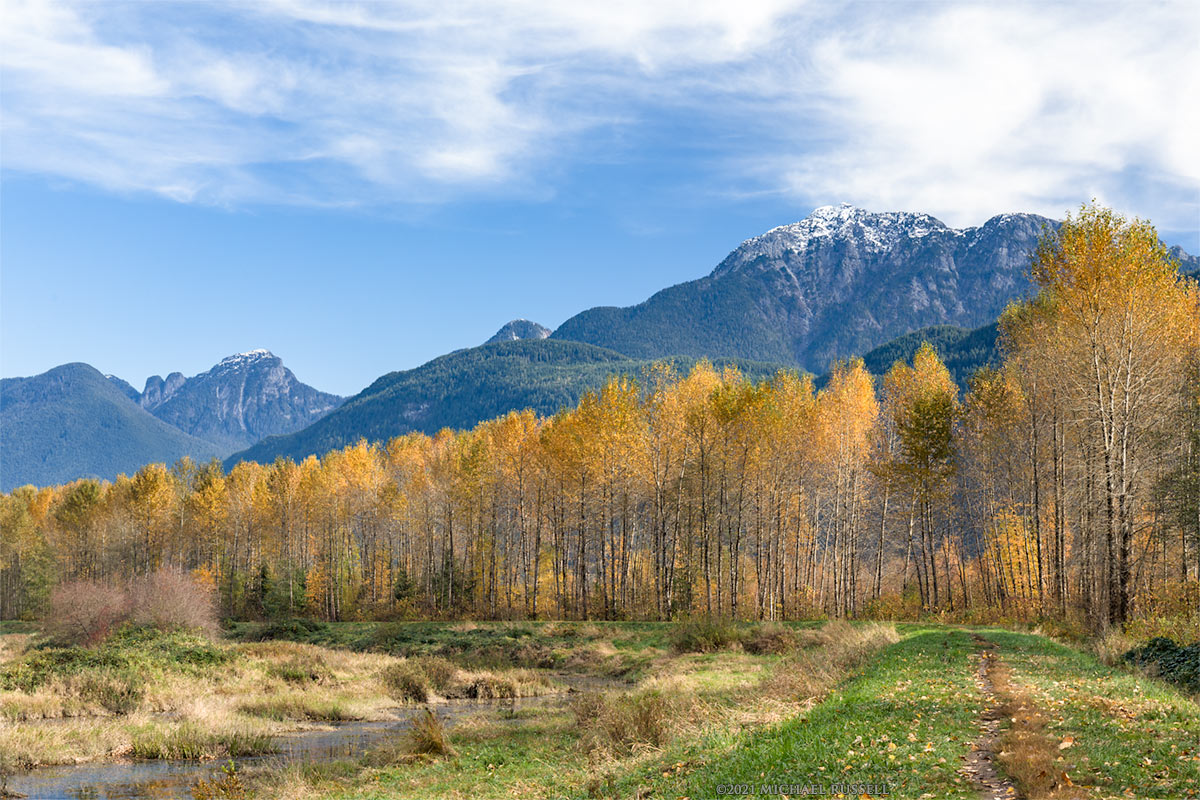 My plan before this moment had been to walk up onto the Pitt Polder dike and take a quick look at one of my favourite views looking north. I stayed for longer than that, and made the photo above looking east towards the Mount Blanshard’s Edge Peak (The Golden Ears). I believe the yellow trees in the foreground are Black Cottonwood (Populus trichocarpa) which I don’t recall having as nice foliage in the fall in previous years. One doesn’t need to walk far (or at all) to see great scenery in this location though. I made the panorama below to show why this is one of my favourite views in the area, and this is just 45° of a 360° view. The wetland in the foreground here is the Smohk’wa Marsh. The Golden Ears are on the right, followed by Raven Peak, Osprey Mountain (in the Golden Ears Ranges), and Gloomy Peak/Widgeon Peak on the left (Coquitlam Ranges). The Pitt River can be seen in the left hand side of the photograph between the marsh and the mountains to the north.

Panorama of the scenic view from the Pitt Polder Dike (Purchase)

I had never walked along this dike before, and this became a fruitful afternoon of “what is around that corner?” which drew me further and further from where I’d left the car on Rannie Road (and my rain gear). The photo below shows the view mountain peaks I’m most familiar with along this stretch. Gloomy Peak here is hiding behind a colorful Birch tree. Widgeon Peak is hiding off to the left, but I’ve always thought the peak in the middle should be named. If it is named, even unofficially, I’ve yet to find it. I guess I’d just like a result from a 20 minute search through maps sometimes! 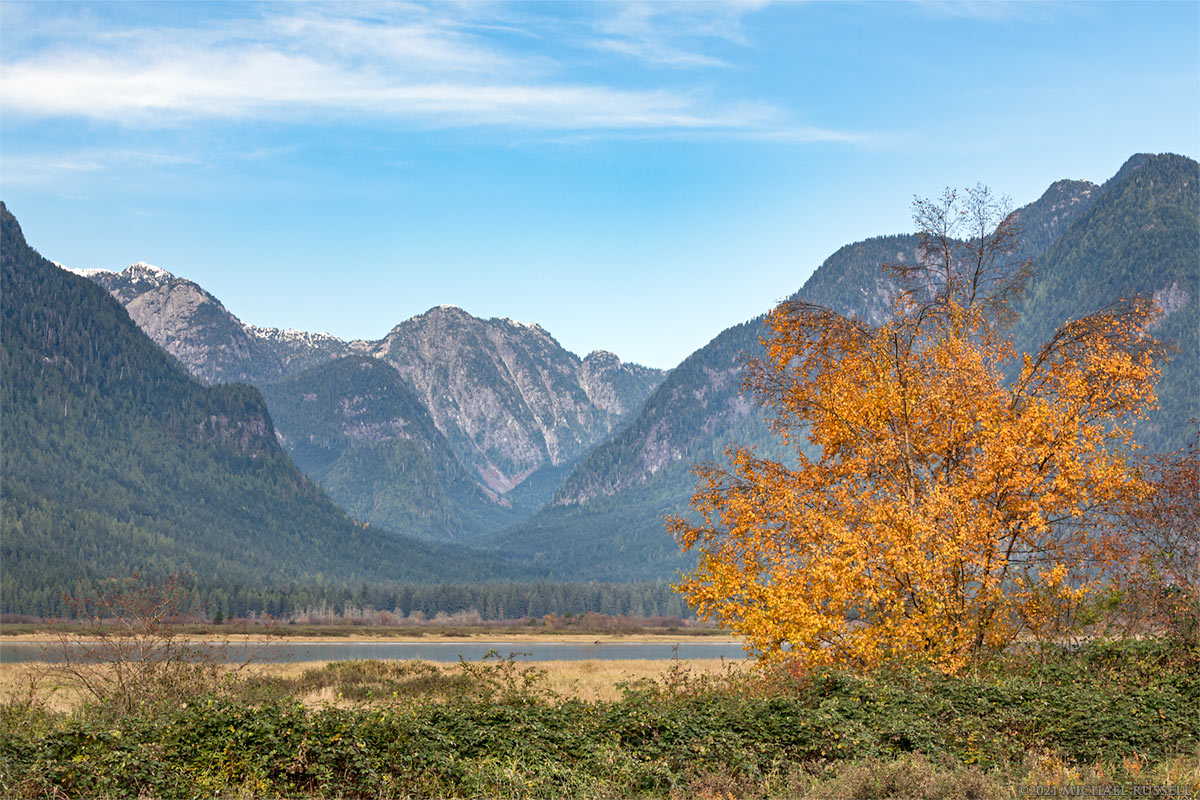 I had continued to walk the dike heading east, going around interesting corners and finding new compositions with fall foliage and mountains. Near the end of this section of the dike I photographed the scene below with some more Birch and Cottonwood tree fall leaves with Osprey Mountain in the background. Osprey Mountain is fairly prominent when one reaches Grant Narrows and travels further along the dike next to Katzie Marsh. I look forward to photographing it and the surrounding mountains soon when they are covered in snow. 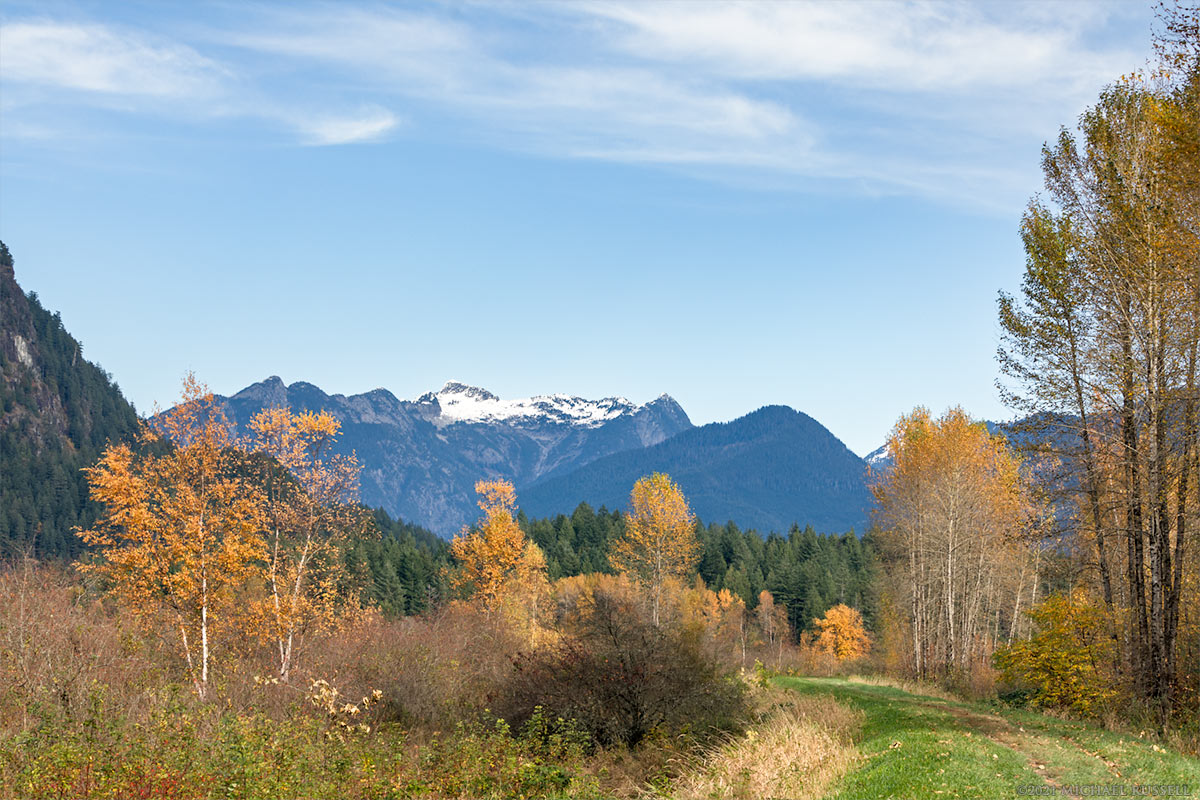 Part 2 of the “Pitt Polder Dike Trail Walk” will have photos I made near the Grant Narrows boat launch area at Pitt Lake as well as some from the “Pitt Lake Dike Trail” that heads east from there towards the Golden Ears peaks.