Mount Shuksan and the Nooksack River in the North Cascades, Washington State, USA 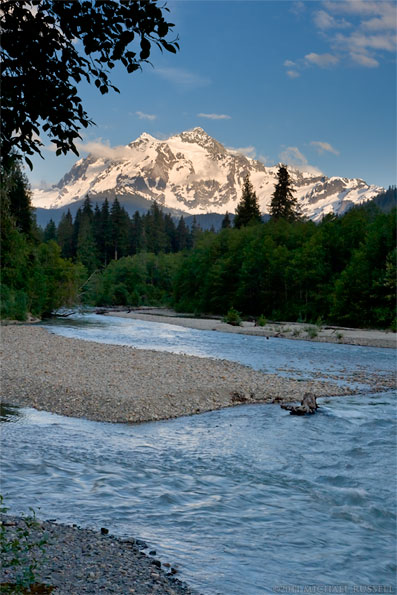 One of the downsides of having a lot of backlog in my photo editing is that I tend to forget what I have. I purposefully wait a while in order to process my images, just so that I am somewhat subjective in terms of images that deserve scrutiny and those that don’t. I often have initial expectations that were not met when I review the images too soon, and sometimes that clouds what is really there. At least for me. I do occasionally go back over images that did not leap out at me during a first pass – sometimes I find something I really like. Sometimes this is due to my perception of the image changing and sometimes I have learned some new post processing skills that open the photo to new potential.

This photo is another example of this phenomenon. I initially passed over it but this weekend viewed it again, and knew how I wanted to process it. I have many photos of Mount Shuksan, but this one is a bit different. This was not taken from Picture Lake, Artist Point or any of my usual places. This is along the North Fork of the Nooksack River (which later flows over Nooksack Falls) at the bottom of the hill near the Shuksan Campground.