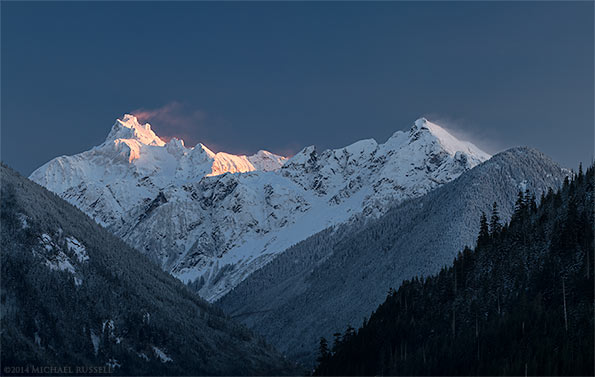 Last weekend I headed out to the Harrison River area to look for Bald Eagles with Steve Cole. As was the case last year, it was very cold by our standards and I had to break out my “big” jacket and a down vest to keep warm (it was -10°C at Chilliwack Lake). This year the Fraser Valley Bald Eagle Festival was a few weeks in the past but reports were indicating there were a lot of Bald Eagles still out on the flats near the Harrison River. Reality turned out to be a bit different as we hardly saw any when driving on Highway 7 and up Morris Valley Road through to the Chehalis River. We saw a lot of eagles in 2012 and last year there were still quite a few eagles though the frozen water made it tough for them to get at the salmon. This year, there wasn’t even a few random ones sitting up in the trees. I suspect the roughly 150mm (6″) of rain earlier in the week that flooded the Harrison River’s banks flushed out all the salmon and the eagles moved on. Last year we decided on Silver Lake Provincial Park as a landscape photography backup plan (which taught me a good lesson at the same time). This year I was still hoping to find where the Eagles might have picked as a secondary location and therefore opted for the Chilliwack River Valley through to Chilliwack Lake. 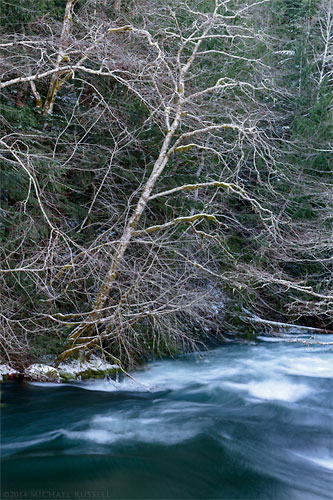 Trees along the Chilliwack River (Purchase)

Unfortunately, I think we saw a total of 2 Bald Eagles at the Chilliwack River Valley and Chilliwack Lake (adding to our grand total of 4 earlier in the day), so clearly they had not congregated there. The water levels in the river were quite high, as were those in the lake. My hopes of recreating some of my earlier photographs of the shoreline patterns at Chilliwack Lake didn’t quite work out as the water level in the lake was several feet higher than it was last fall. Walking down to the bridge over the Chilliwack River did present this scene with some snow on the light coloured branches of these trees (likely Red Alder) overhanging the Chilliwack River. I made a few photographs from the bridge before we headed back to the flooded boat launch area to photograph the sunset on Mount Redoubt. I always enjoy being at Chilliwack Lake and even if the sunset doesn’t do everything one would hope there is usually a nice view of Mount Redoubt and the North Cascades peaks in the area.

For more of my photographs from this area check out my Chilliwack Provincial Park Gallery in my Image Archive.