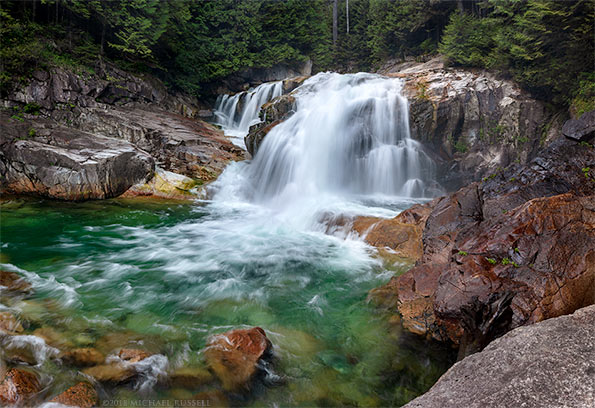 A few years ago I photographed Lower Falls in Golden Ears Provincial Park during a period in June where there was relatively little water flow over the falls. I really like that photo but since then I’ve wished I had a photo of Lower Falls with higher water levels. During the winter and at the height of spring runoff – the water flowing over the falls consumes almost the whole width of the area. This can be quite a raging torrent, and the spray the wind may blow in your face can make both viewing and photography difficult. This year I thought that the amount of rain and the snowpack we had would sustain a higher flow than I’d photographed back in 2015, and I was correct. The photo above shows a more typical view of Lower Falls than that older photo. 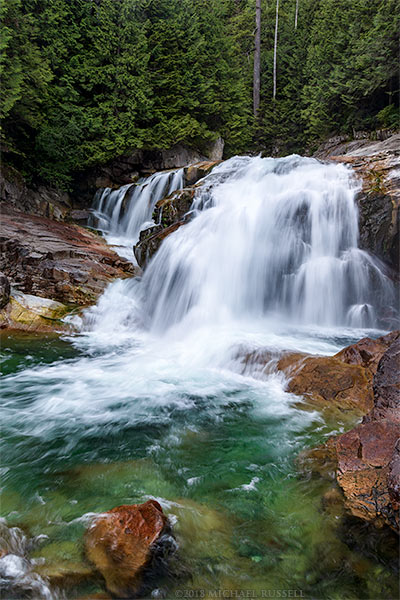 June is also my preferred time of year to photograph Lower Falls as the kids are still in school, the heat of summer isn’t yet here, and camping season hasn’t reached its peak. I’ve been to this falls on a hot summer evening and it would be nearly impossible to photograph as the place is covered in people. In June most are smart enough to not venture into the pools above the waterfall (people dying or being injured here has happened way too often) as the water flow is still quite high. Later on, however, the amount of swimmers makes any photography nearly impossible – so I’d recommend early – mid June as the perfect time for photographing these falls. If you get your timing right, you can also photograph some Streambank Arnica near the falls as well!

I talked to someone from Toronto while I was photographing Lower Falls. His friend, and I don’t know what would possess someone to do this, hopped across the boulders downstream and wound up on the opposite side of the river from the falls. When he emerged from the forest he slipped and fell. I thought he was going to slide into the water, but he caught himself before he did, though his phone was not so lucky. The photo below shows where he slid, and the eventual path of his phone into the water. It did land in a fairly shallow part of the creek, however, so he spent about 10 minutes trying to determine how to climb down and retrieve it. This all seemed to me like I was about to watch someone die so I pointed out to his friend who had stayed on the viewing platform side of the river that many people have died in this spot when the current was more than they could handle. Despite a few calls to leave the phone, the guy jumped into the water near his phone (after taking off his shoes and socks) and retrieved it. The jump looked bad enough – but I had no idea how he was going to get back out! When I left he was still contemplating this, and had tried several routes out of there that had not been successful. I decided to leave. There was nothing I could do to help, and I didn’t want to watch anymore. As there were no stories in the news the next day I presume he found a route out and hopefully without injury. His phone was unlikely to be as lucky, as it was submerged for a good 10 minutes. 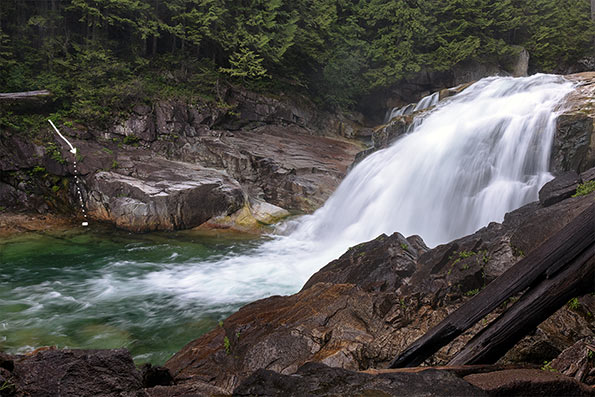 I have to say that while photographing these falls I made a number of mistakes I wouldn’t normally make, and the cell phone guy distraction is the excuse I’ll use this time. I did encounter some blowing mist/spray that was problematic. It was nice to know I had a weather sealed camera and lens, though I don’t get them wet on purpose and still wipe them down as much as possible. While talking to the fellow from Toronto and watching his friend risk his life for his phone… I failed to wipe as much spray off my front lens as I should have. Unfortunately this meant that a number of compositions were not usable which was entirely preventable. The photo above does have some spray effects you can see in the trees along the top, but most were much worse. I would normally consider that photograph non publishable but it did show the area where he fell better than other images. I may go back and try my luck here in a few weeks. Even if there are too many swimmers in the water – it is a great, short hike through a scenic area – and that is always worth it.

More photos from this park can be found in my Golden Ears Provincial Park Gallery.