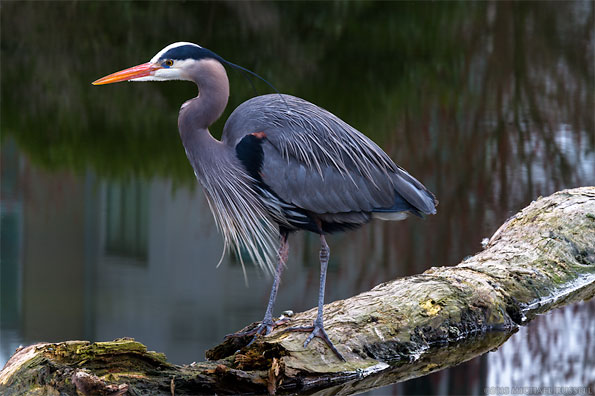 In mid March of this year I went to Stanley Park to photograph the cherry blossoms and a few other things. After I was finished photographing cherry blossoms I walked along the seawall to the Convention Center. On the way, in Devonian Harbour Park (between Stanley Park and Coal Harbour) I saw this Great Blue Heron (Ardea herodias fannini) fishing in a small pond. One of the largest urban colonies of Great Blue Herons reside at Stanley Park – so seeing herons here was not really a surprise. I made this photograph not only because I was already standing close to the Heron, but because of the reflection of the buildings in the background. This pond is right next to the Stanley Park Causeway, which is a bit like a highway most of the day, and just beyond that are very expensive apartment buildings in the “West End” of Vancouver – so this is a wild animal in an urban environment. As is usual for Herons, this one made a good subject by standing still most of the time I was there. One of my favourite Heron photographs was just across the harbour in Stanley Park – a Heron fishing at night.