If one were to point to an “iconic” composition from Golden Ears Provincial Park most would choose the second image here, showing some of the peaks of the Golden Ears mountains. While this may be the most popular scene, I decided to feature a slightly different composition in the photograph above. Even without the mountains in the background, I still like the impact of this scene. I have a few different compositions of this, but I think the wider panorama above shows off the area more effectively. In conditions where there were clear skies and/or some snow on the mountains, I think the bottom scene might prevail.

I have previous photographed this area, but never really have encountered “perfect” conditions for doing so. I had planned on photographing this area in the snow last winter, but snow wasn’t really part of our 2014/2015 winter unfortunately. I headed to Golden Ears Park a few weeks ago on a cloudy day, as I knew my main goals were wildflowers, waterfalls, and Gold Creek itself. When I reached this view, about half way to Lower Falls along the Lower Falls Trail, I decided that the iconic view was worth a photograph regardless. The slight haze in the sky and the clouded background still allowed for enough contrast to photograph Evans Peak (left) and Edge Peak behind the foreground of Gold Creek and the many Red Alder (Alnus Rubra) trees lining the edge of the forest. 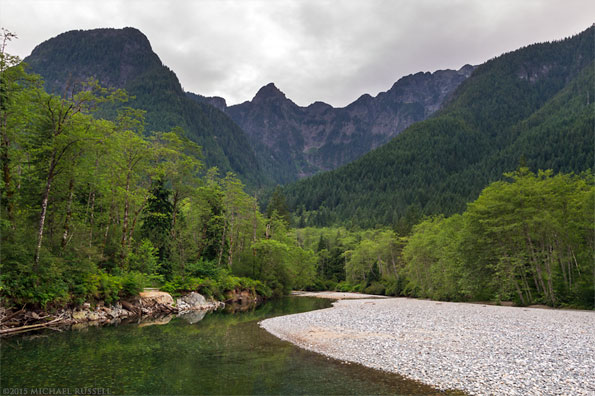 Which one of these compositions do you prefer? Do you think the second composition here is effective despite the imperfect conditions in the sky?

For more of my photographs from this area visit my Golden Ears Provincial Park Gallery.

4 thoughts on “Gold Creek and the Golden Ears Mountains”