Fall Color at the Beaver Pond in Gatineau Park (Purchase)

A few weeks ago I was in Ottawa, Ontario visiting family and we did a lot of driving around looking for fall foliage colors and other scenery. I was there a week before peak color, but I still saw a lot of foliage that was well beyond what I’d normally see even during a great fall color year in and around Vancouver. Much of the great color was in Gatineau Park, which is just across the Ottawa river in Quebec. I’d been following Gatineau Park happenings in social media for a few weeks, and while the peak of color was the following week, we also avoided all the closed roads and crowds!

I have many photos yet to come from my trip to Ottawa, but I thought I’d start here with a few that show some of the best color I saw, but also from locations that don’t really merit their own blog post in the future. The first photograph here is from the “Beaver Pond” along the Gatineau Parkway. I couldn’t find a more official name for it, but the “Beaver Pond” is what most people seem to call it. This photograph, and the wider angle of it, show some of the reds and oranges that we rarely get (from native species) here in British Columbia. 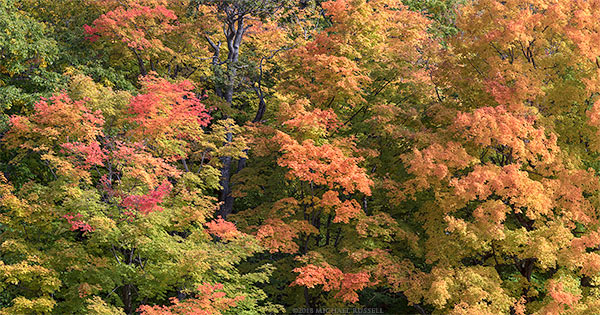 The second photograph here was made at Lac Bourgeouis but from the side of the Champlain Parkway. I’d been to Lac Bourgeouis the day before, but these colors had improved a lot from the day before, and probably show the most interesting foliage I saw on the trip. Clearly the Maple leaves have not turned to the extent one would see at “peak” foliage color, but there are lot of reds and oranges, as well as yellow and the summer greens. I like that this photo shows the whole spectrum from summer to fall foliage.

This panorama shows off the lighter colors of the maple tree trunks with their brighter foliage above. This is another unnamed marsh/pond in Gatineau Park, but is near the “Shilly Shally Shelter” and the junction of the Lac Fortune Parkway and the Champlain Parkway. I have several (to be published later) photos of this location that show a wider perspective but I think this one shows the most interesting elements of the scene. There are some smaller conifers in this area which further contrasts it from British Columbia where they would be the dominant type of tree in a mature forest. 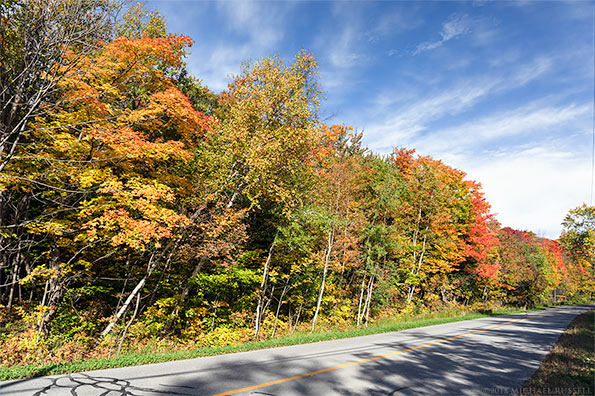 Sometimes a good patch of color is just along the side of the road!