Ice on the Fraser River with the Golden Ears Mountains in the background – photographed from Brae Island Regional Park in Fort Langley, British Columbia, Canada.

Winter is usually a fleeting concept for much of Metro Vancouver and the Fraser Valley. We get the odd snowfall, a few cold spells below zero, and it doesn’t always have a lot of impact (easy for me to say, usually working at home). Sometimes we have extended cold snaps with snow that lead to interesting conditions we don’t see all the time. In late December and early January we had almost a foot of snow on the ground and temperatures were getting down to -12°C at night, which is more winter than we are used to! I headed to the Fraser River in early January to see if I could get some good photographs of the ice on the river and the snow on the mountains – not conditions I get to see all that often.

Brae Island Regional Park is a location I have photographed before for its good views of the Fraser and the mountains to the north. The best view is often from Tavistock Point though there are other northern facing spots as well. Unfortunately, most of those had fallen trees and brush from the winter storms blocking them. In the few spots I could get down to the water without going off the trail the river ice had ridden up the bank making venturing further a bit too risky not knowing if there was sand or water below. The above photograph was made at Tavistock Point after sunset. As this was facing north, there was only a slight “Belt of Venus” effect in the sky which isn’t really noticeable here. The approximately 2.5 km of trails to get to this point normally takes me about 25 minutes to walk, but as there was snow this trip took me about 50 minutes. Many people had walked the trails in the previous days since the last snowfall, and we had one above zero day in between, so the trail was sheer ice or very slippery. The frozen river conditions made this well worthwhile but if you have similar conditions and aren’t up to falling on your butt a number of times on the way I’d skip it for warmer days! 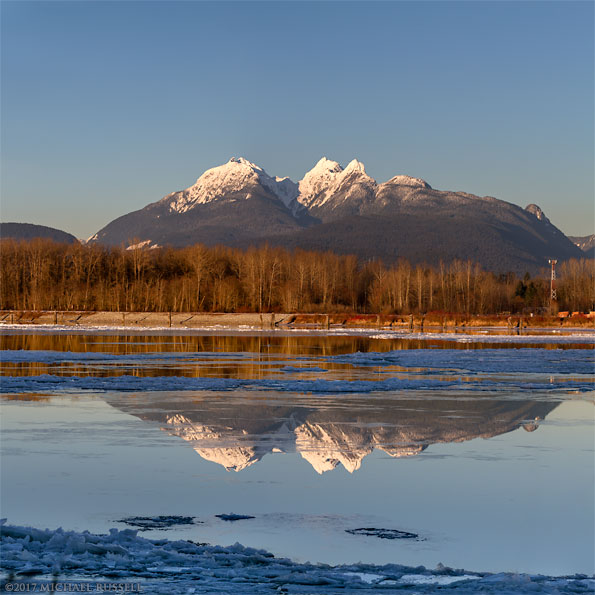 The photograph above was made slightly earlier in the evening than the panorama. This was photographed near one of the spots I mentioned with fallen trees, but I was able to get near the water enough to make this photo, though I had to edit out a small tree branch I just couldn’t get out of the way. The frozen Fraser River was enough of a subject to keep me busy, though I do wish that I had been able to find more spots with mountain reflections in the water. The Golden Ears Mountains (Mount Blandshard) themselves are a great subject, and consist of McPhaden Peak, Edge Peak and Blandshard Peak. The mountain that is reflected in the Fraser on the right hand side (in the first photograph) is Mount Robbie Reid.