Devon Falls on the slopes of Sumas Mountain at Bassani Park in Abbotsford, British Columbia, Canada.

Updated: I revisited Devon Falls twice since I originally made this post and have an update below. 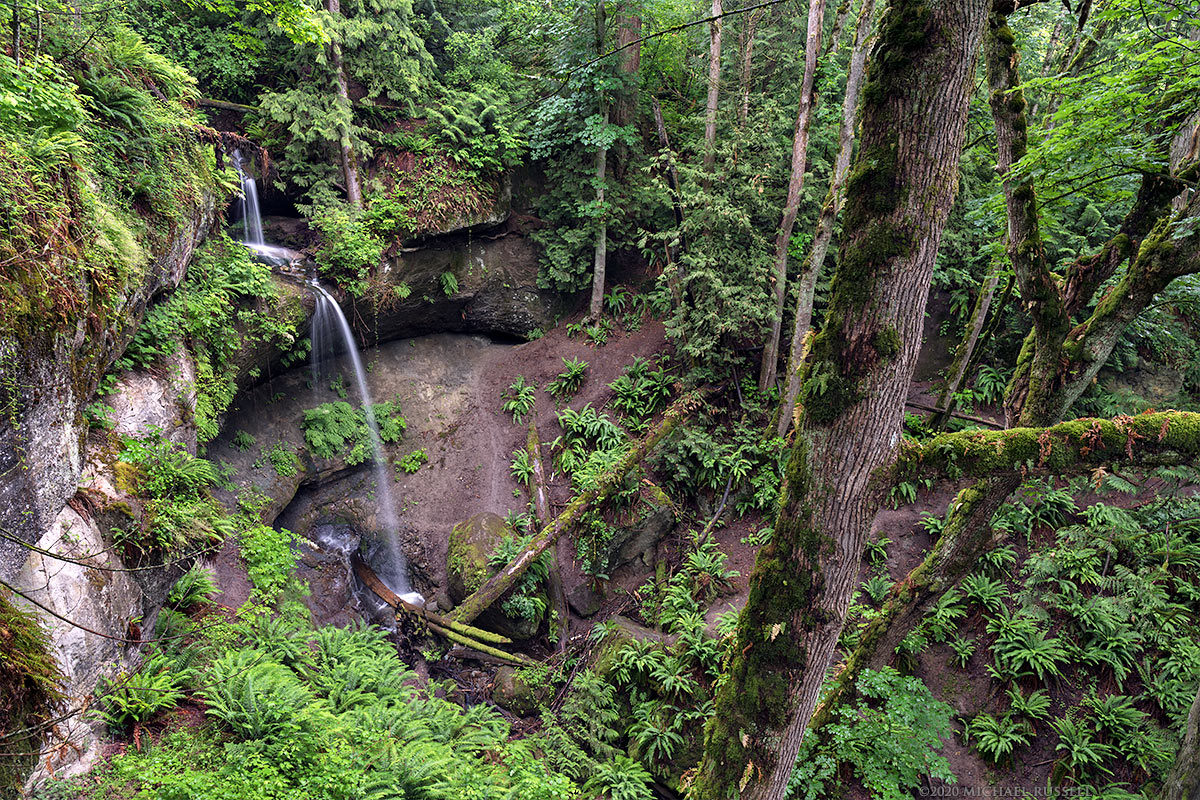 Despite going to University for 3 years in Abbotsford, and driving past this location many times, I had no idea until earlier this year that Devon Falls existed. Upon learning this interesting waterfall was there, I went out and photographed the falls a few weeks ago on my way to a few other locations. It seems to be a waterfall that always has a relatively low level of water in it, but the surrounding erosion created by the different kinds of rock in the area (mostly comprised of feldspar, quartz, and sandstone) make it an interesting location. The soft sandstone has eroded and created the multiple tiers of this waterfall and the almost cave like areas behind it.

This waterfall on the slopes of Sumas Mountain was named Devon Falls in 2010 after the death of Devon Clifford. Devon was a 30 year old Abbotsford musician who died during a performance in Vancouver earlier that year. The falls were a favourite spot of his to visit.

Update: Since the fall are so easy to see, I’ve been there twice since I first wrote the above post. The next visit was in late October where I was hoping for a bit of fall foliage at the falls. There was just a small amount of foliage, but it was accompanied by a very small volume of water flowing down the falls. If I’d added a garden hose or two I probably could have doubled the flow! The water doesn’t really even show in the photographs, so it seems unless the fall has already been wet, this might not be a good viewing time!

The next time I visited Devon Falls was in mid-December after a series of rain storms. There was much much more water flowing this time, and it made for an even more striking waterfall photo than the first photograph here. It was a dark and dreary day, which was perfect for a waterfall photograph! I’m not sure if this is a near peak flow for this falls, but I’ll probably check it out again later in the winter to find out. I did notice the addition of the large tree trunk that has fallen down into the ravine. I’m not sure if this was the natural result of gravity, or was helped by teenage shenanigans, but I can’t say it is a welcome addition to the scene!

For more photographs of the area visit my Abbotsford Gallery.