Last year was a great year for fall foliage and there was still some remaining when I visited Deer Lake Park in Burnaby during mid November. This was after the first damaging atmospheric river this part of British Columbia dealt with. Deer Lake itself didn’t suffer much in the way of damage though some trails were initially flooded due to the influx of water. Not much of this was visible when I was there 4 days later although some trees had fallen. I parked at a new (to me) starting point on the west side of the park and walked around the lake. While the sun made on a few short appearances wind stayed quiet so there were some great reflections much of the afternoon. The photograph above shows hints of fading fall leaves in the larger trees such as the Maples and some good foliage in the Willows near the shore of the lake. The building in the background is the Shadbolt Centre for the Arts which sits above the “festival lawn” that is used for festivals and concerts. 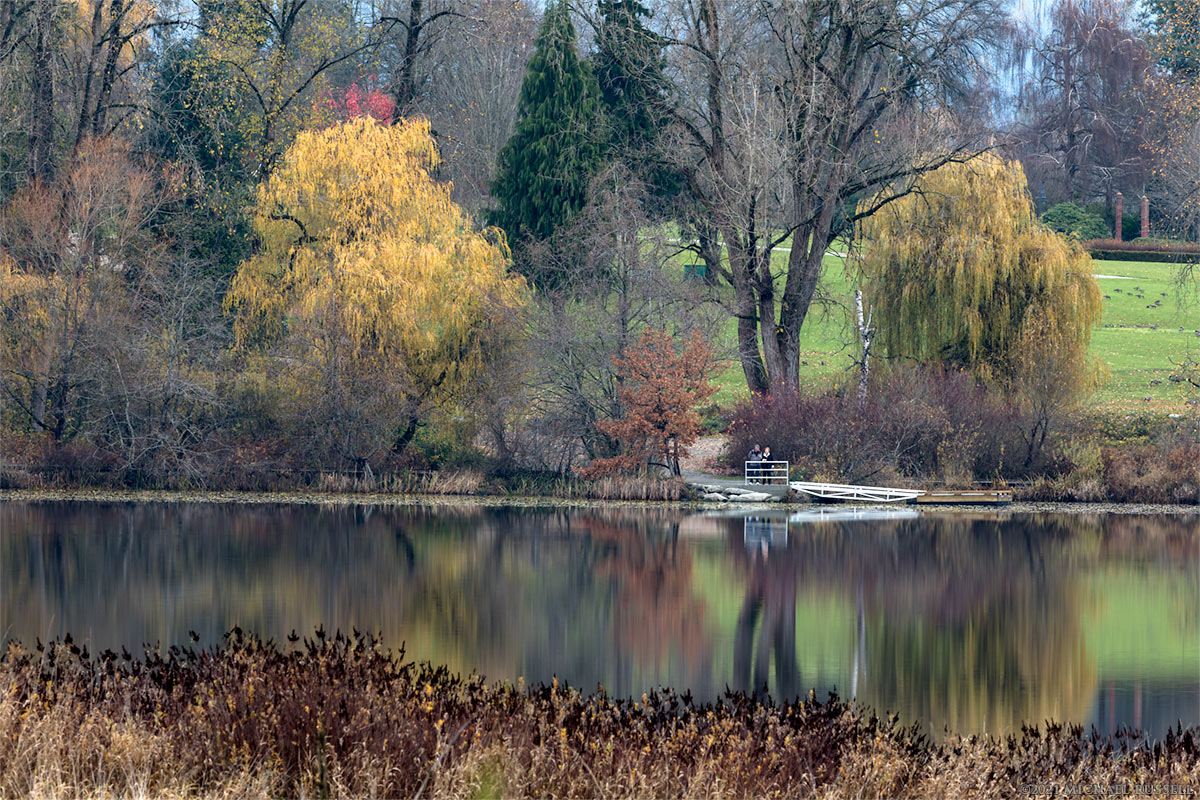 I photographed various people enjoying the view on the newly replaced dock/viewing area on the north side of Deer Lake, but I prefer this wider view of two seniors in this spot flanked by the nice foliage of the Willow trees. All those dark shapes you see on the festival lawn in the background are a rather large flock of Canada Goose manure spreaders roaming the area and occasionally making a racket. 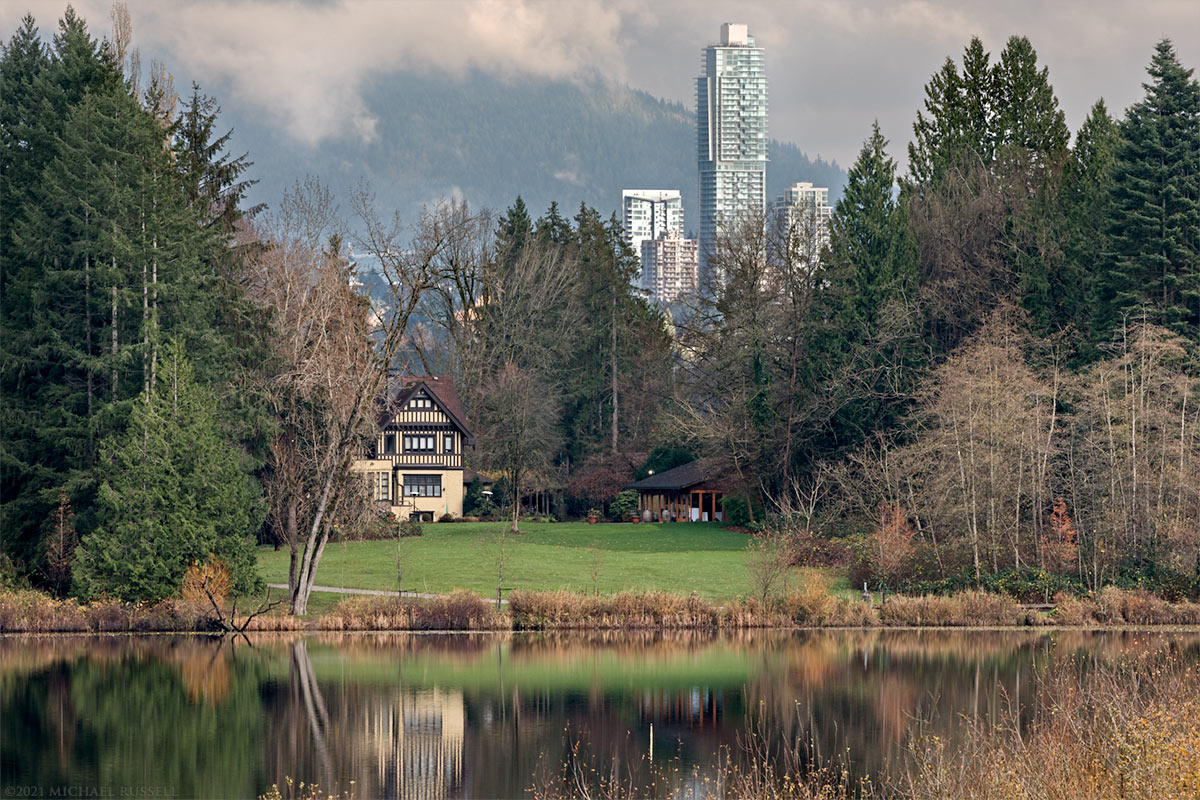 The Lougheed Mall area in Burnaby is undergoing a huge transition due to increased transit and with that comes a lot of new development and condo towers. It has certainly changed a lot since I lived nearby in the late 1990’s. Every time I visit Deer Lake or Burnaby Lake it bugs me a bit I didn’t visit at all when I lived fairly close! I liked the contrast in this scene between the historic Hart House (built in 1912 in the Tudor Revival style) and the “City of Lougheed” towers in the background. There are going to be many more towers there in the future but personally I’d rather look at Hart House and the other historic buildings around the edges of Deer Lake Park. Hart House has been home to the Hart House restaurant since 1988. 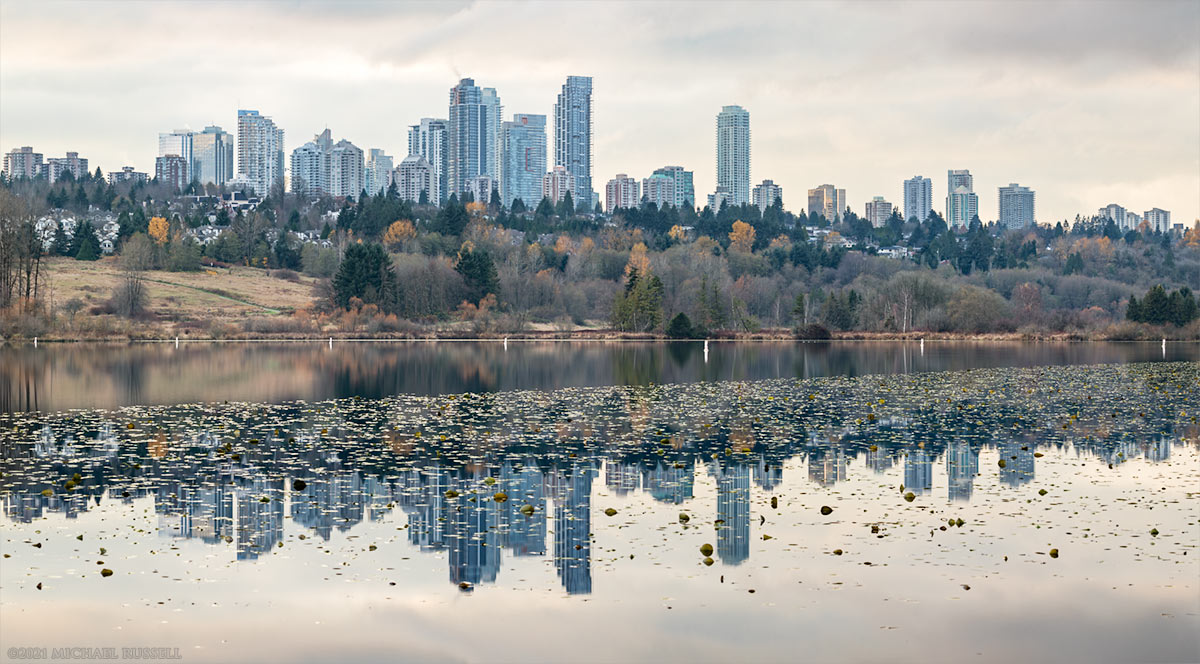 The last time I photographed this scene at Deer Lake was the previous autumn, and many of these towers were still being finished an some still had cranes erecting them. A lot of the skyline around Deer Lake Park seems to be changing and I imagine the next time I’m looking at this scene there may very well be another crane in sight.

In September of 2021 I was at Deer Lake for a quick visit while on my way back from Richmond and photographed a few scenes in the gardens and along the shore of Deer Lake. While I was near the dock pictured in the second photograph above, a young couple came down with a dingy and launched into the water near that location. You can see from the photograph above there are a lot of weeds in the water near the shore, and were much thicker during that point in the season. The progress was very very slow getting through that thick weed layer with the dingy. The young lady involved seemed increasingly less impressed with the frequent off colour exclamations and oars flailing about that never yielded the joy of open water. When I left they were still about 15 feet from the edge, it was getting dark, and the audible bickering was ramping up. Hopefully they did not require rescue of any kind, though I did find it rather amusing as did others passing by on the shoreline trails.

More photographs of Deer Lake and other parks in the City of Burnaby can be found in my Burnaby gallery.