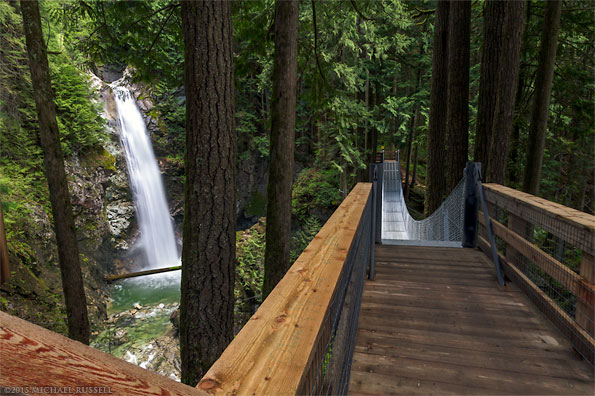 The new Cascade Falls Suspension Bridge is now open in Cascade Falls Regional Park. I have been waiting for this for a while as last year I tried to visit Cascade Falls but the park was closed for construction. I had some concerns that this would somewhat ruin the feeling of the park and the falls lookout, but I enjoyed what they have there now. Previously, a clear view was rather tough to come by (without jumping a fence) and this new bridge really gives a clear view of the falls from several viewpoints. The layout here (suspension bridge next to a waterfall) is reminiscent of the Lynn Canyon bridge in North Vancouver, but isn’t nearly as long. The view here is also a bit better I’d say, and doesn’t have the tourist trap atmosphere (or cost) of the Capilano bridge. The Cascade Falls suspension bridge spans 35 meters (115 feet) from one side to the other which makes it the shortest of the 3 Vancouver area suspension bridges. 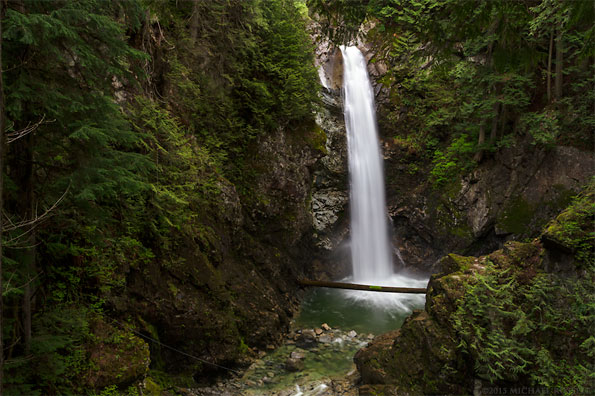 After a brief (but not flat) hike up the trail to the falls you reach the first view point next to the suspension bridge (photo 2 above). This is close to where the older viewing platform was located and gives a similar view. From there you can cross the suspension bridge to the second platform. The initial step onto the bridge is rather steep, and if this were any other sort of surface it would be rather slippery. The metal covering the bottom of the bridge gives a really good grip, and you won’t likely be slipping on it unless it was covered in ice. The bridge does not bounce much when walking on it, which I am sure many will appreciate. This might be different if there were 20 people walking across it, but I was mostly alone during my trip there a few days ago (a weekday). The first third of the suspension bridge gives a good view of the falls, as well as a view downstream of Cascade Creek (below). 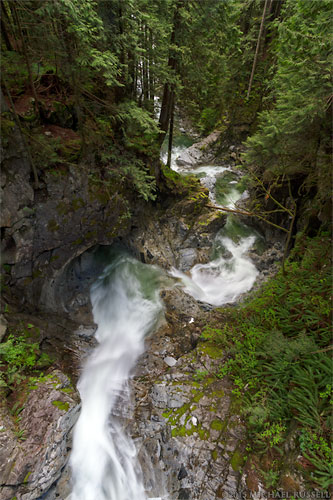 The viewing platform on the other side of the suspension bridge gives a completely new view of Cascade Falls. After a good breeze came up I had a lot of mist from the falls to contend with – which would be a nice feature on a hot day. My photos from here still look a little strange to me, as I am so used to seeing the usual view of the falls, this looks like a bit of a different place. The view from the new viewing platform is a bit better as there aren’t the rocks obscuring the view of the pool below the falls is the case with the first platform. 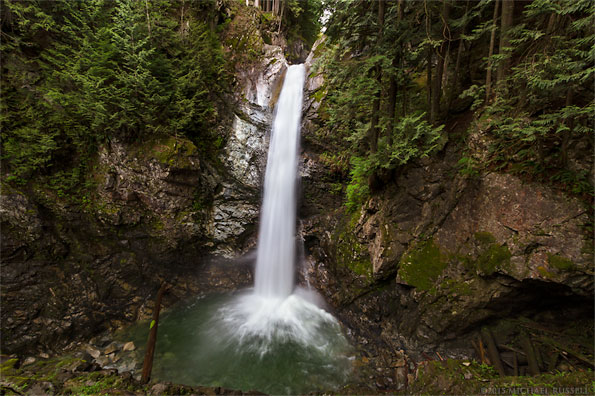 When I was here I was lucky to photograph Cascade Falls with good cloud cover (and even light), but shortly after this the sun came out. The first platform before the bridge gave a great perspective on the rainbow at the base of the falls. 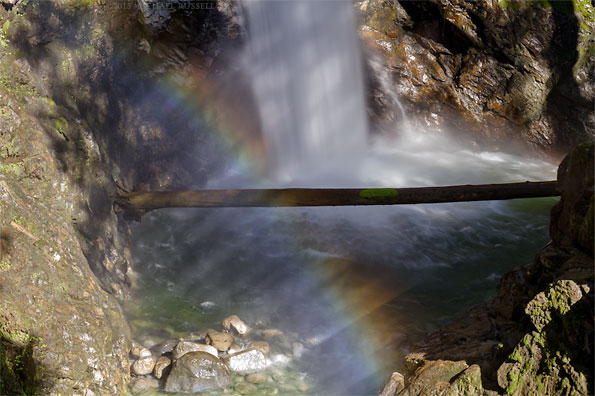 For more of my photographs from this and surrounding areas please visit my Fraser Valley Gallery in my Image Library.