A review of the Canon EF 1.4x Extender II 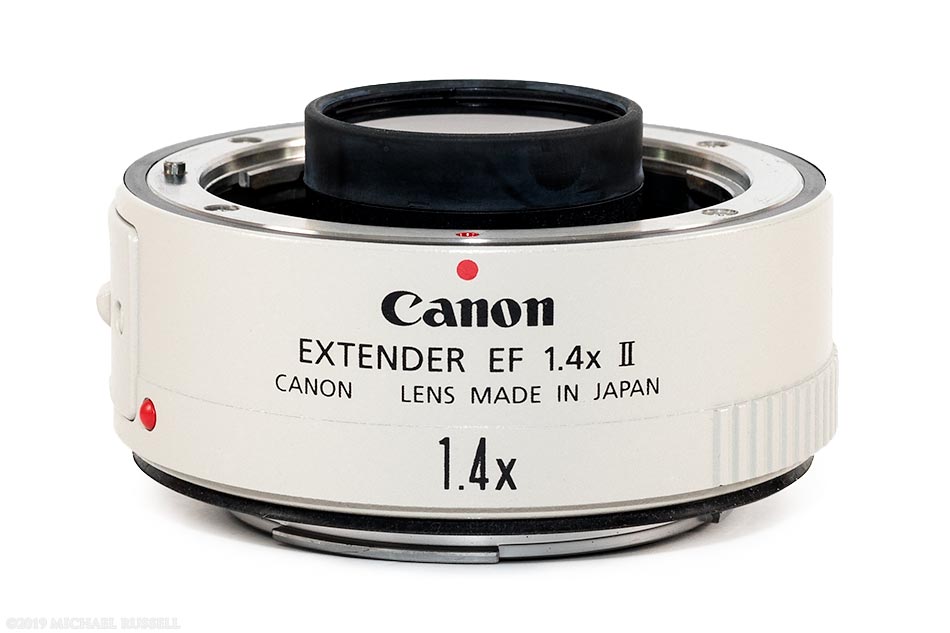 Late last summer I decided I wanted a bit more focal length than my Canon EF 70-200mm f/4L IS USM Zoom Lens could offer. Not being able to afford a really long telephoto lens, I looked into the Canon Extenders. Having eliminated the 2x version, I had a choice between the Canon 1.4x EF Extender II ($350) or the newer model the Canon 1.4x EF Extender II ($499). I read many reviews of the new extender over the old one, and it just didn’t seem to be worth the extra $150, at least for me so I went with the mark II version.

An extender attaches between a compatible lens and the camera body to give some added magnification with that lens. So the Canon 1.4x EF Extender would make a 200mm focal length more like 280mm. While there can be some image degradation, this does allow for a relatively cheap way to achieve the magnification found in longer focal lengths. An extender is also lighter and smaller than a lens, coming in at only 2.9″ x 1.1″, 7.8 oz. (72.8 x 27.2mm, 220g). An extender doesn’t take up much room in your bag or add much weight during a long hike. Using the 1.4x extender your lens operates 1 stop slower than it otherwise would. So my Canon 70-200mm f/4 L IS can only open up to f/5.6, not f/4. This is something to consider, depending on the camera you are using. I’ve been happy with the results from my Canon 7D with higher ISO performance, so if I am shooting wildlife with this combination, I will bump the ISO up a bit to compensate for what would otherwise be slower shutter speeds at f/5.6.

I asked my contacts on social media and in a few photography forums if anyone had used both the II and III versions of this extender and what they found to be improved in verion III over II. The apparent differences were not worth $150 in my opinion – especially behind the 70-200 lens I would be using it with. Many mentioned there was less Chromatic Abberation (CA) in the newest version. I decided to buy the less expensive version but to keep an eye open during post processing for CA. At this point I have only seen this in one photo, and it was a poorly exposed throwaway that was of no consequence. There still may be situations where this becomes an issue, but as I am aware of it and what shots I’ve made with the extender, I do not foresee this being an issue in the long run.

The 1.4 extender III also has improvements in the coating on the outer pieces of glass – and it is said to not pick up fingerprints like the version II. There are also improvements to better match improvements in some of Canon’s super telephoto lenses that were released at about the same time. I am not worried about fingerprints, and I am unlikely to own some of the really long telephotos anytime soon. I can currently think of better ways to spend $8000. If I come into a landslide of money I will be able to upgrade my extender in addition to purchasing really long glass.

Another issue with extenders can be image degradation. As you are placing more and more pieces of glass between your sensor and subject, image quality is likely to decrease slightly. I have not really noticed this in any of my images taken with the EF Extender II – though I am not one to do too much “pixel peeping” at 100% looking for flaws either.

If you are on a budget and looking to get a bit more reach out of a lens like the 70-200, the Canon 1.4x EF Extender II (or a current version) might be the perfect way to do it. Using the version II for almost 8 months I’ve had no issues and am happy with the photographs I have been able to make with it. Glad to say buying this accomplished exactly the purpose for which I purchased it!