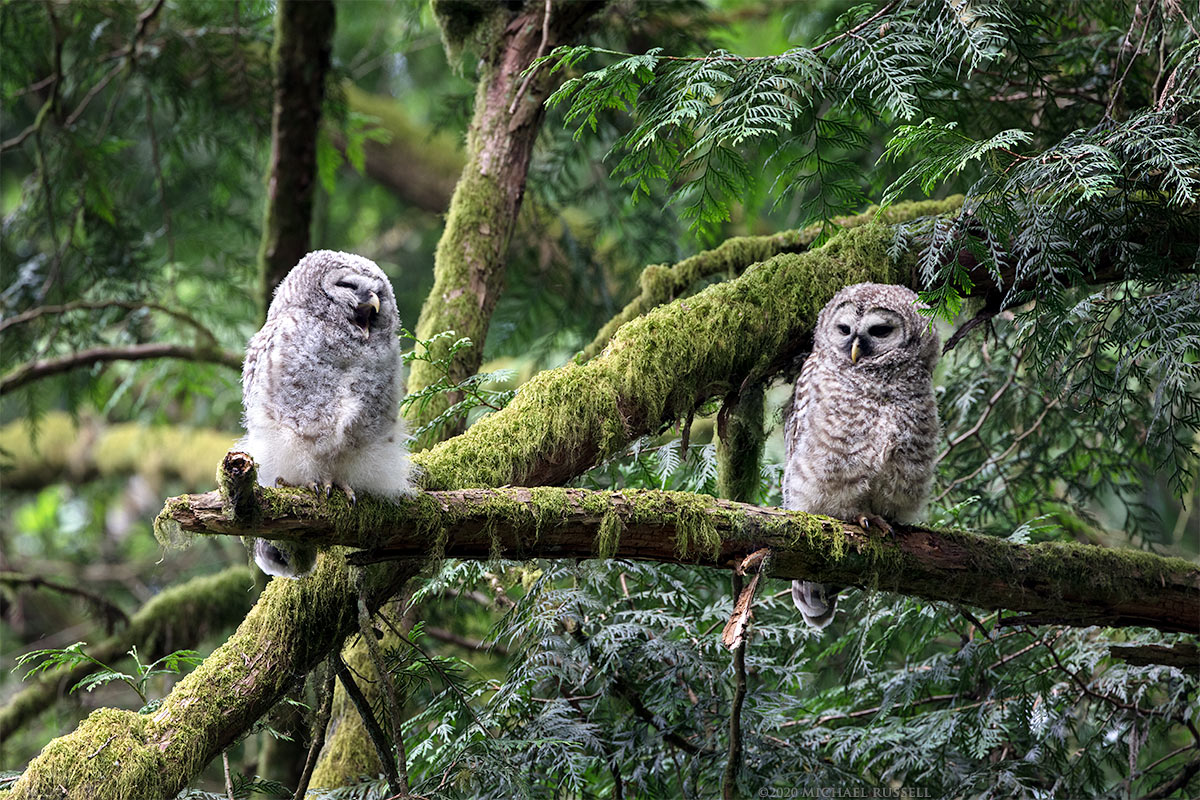 I recently went for a walk with my Mom in Campbell Valley Regional Park. At the bottom of a hill there was a man standing in the path with his fingers to his lips, and he then pointed up into the tree canopy. These two Barred Owl owlets (Strix varia) were perched on a Cedar tree branch close to the trail. I had brought my camera, but only had my 24-70mm lens with me just in case some wildflowers or other small scene was too interesting to pass up. Unfortunately – a lens that wide (even at 70mm) is not something you can really use to photograph juvenile owls up in a tree (that are 21m / 70ft away). When I got home I immediately packed my 100-400mm lens and went right back to the park. I had no idea if the young owls would still be there, but I was lucky and they were! I was completely prepared for them to have moved on but I was back there in under an hour which helped. I’ve not seen young Barred Owls like this in the wild before, so seeing them this close (and with a clear view) was a great opportunity. I have photographed adult Barred Owls before, both in my front yard and in Campbell Valley Park. Now that I know the sound of the begging calls (watch the video at the end of this post) they make I might be able to spot other young owls in the future. They certainly aren’t songbirds!

When I returned the two owlets were still sitting a few feet apart on the branch. The first photograph above shows the one on the left in mid “begging call” which it repeated very frequently during the time I watched it. It seems likely the owlet on the left is a bit younger, or at least has a lot more of the fluffy baby feathers compared to the one on the right. I wasn’t too sure at the time of the way things work with baby owls, how quickly they leave the nest, and if they are fed by parents at all or for how long so I had to do some research.

Barred Owls are generalists – they have a wide variety of prey that includes mostly small mammals and rabbits, but they also eat other birds, amphibians, and invertebrates. While the female is sitting on the nest (for 28-33 days) the male occasionally brings prey to the nest, and the female may leave to hunt while incubating the eggs as well. After the chicks hatch both male and female owls will feed the chicks, though the male sometimes brings the prey to the female to give to the chicks. After about six weeks of being fed in the nest, the owlets leave by climbing up or down a tree (if nesting in one) or flying to other branches. For 4-5 months after leaving the nest, the young owls are fed by parents while they learn to hunt. After this period they disperse and find their own territories. 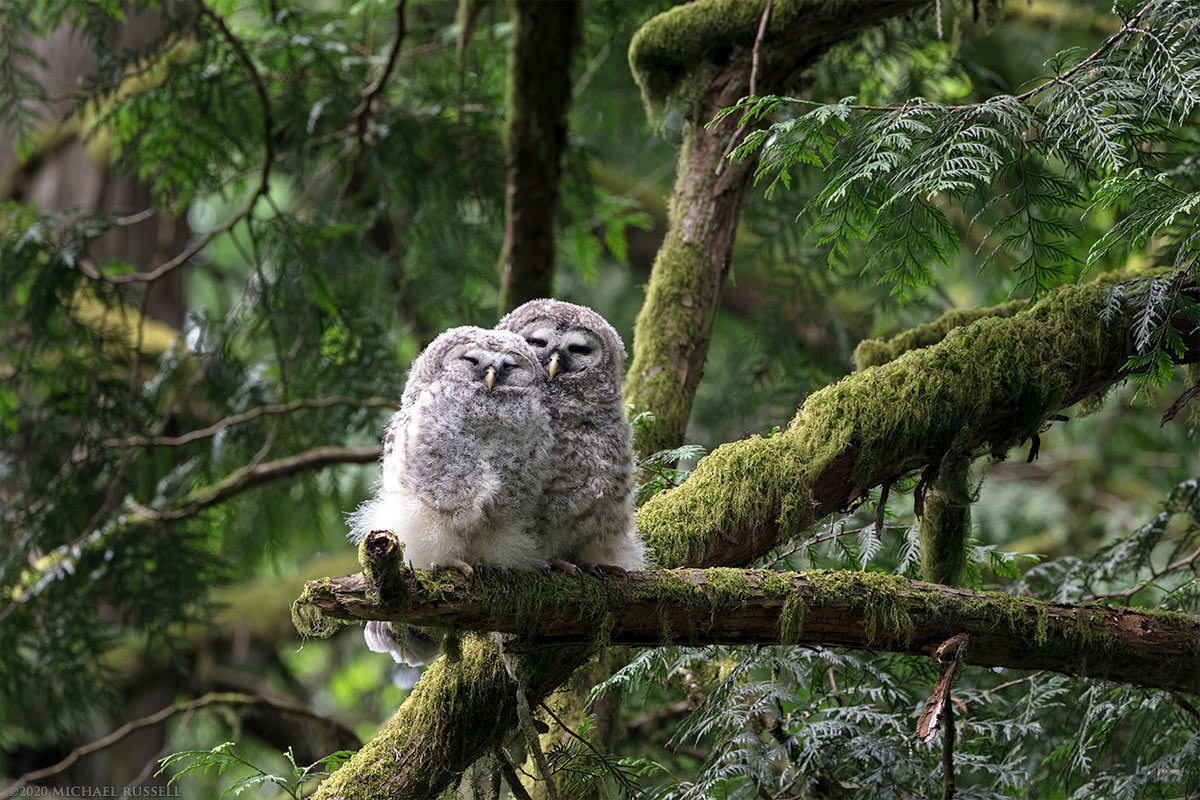 After I observed these owls for a while the older one on the right moved across the branch and snugged up with the younger one. The younger owlet continued very frequent begging calls. Perhaps it had not fed as recently as the other, or was just a bit less patient. My presence, and those of other people passing by in the park didn’t seem to be of any interest to these owls. As they have such good eyesight and hearing though, it wasn’t as though they weren’t aware of everything happening around them. At one point (photograph below) they were both looking intently at the hillside behind me. I didn’t hear anything, and turned around a few times and didn’t see anything. When they got really interested again I turned around and there was a deer in the bush about 15m (50 ft) behind me. The deer hadn’t seen me and ran back up the hill, crashing through the bush and making lots of noise. The owls didn’t move or care that much about this occurrence. 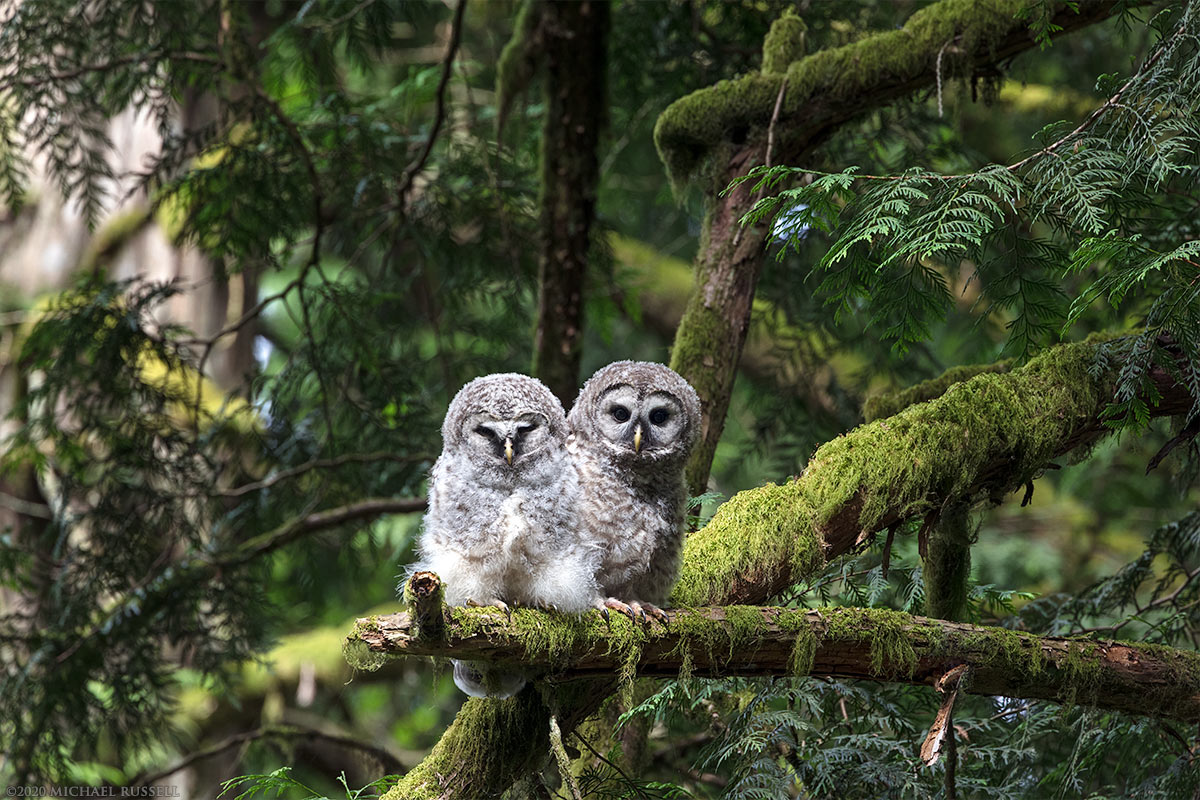 At the time I hadn’t remembered at what point baby owls leave the nest so there was some speculation with passersby regarding their flying abilities. Sometimes young Barred Owls leave the nest without flying, and climb up and down trees and hang out on the branches before flying around. Eventually the smaller owlet on the left answered the question for this pair and switched trees. The flight looked quite smooth and the landing was relatively elegant. They seemed to have moved beyond the crash landing stage. 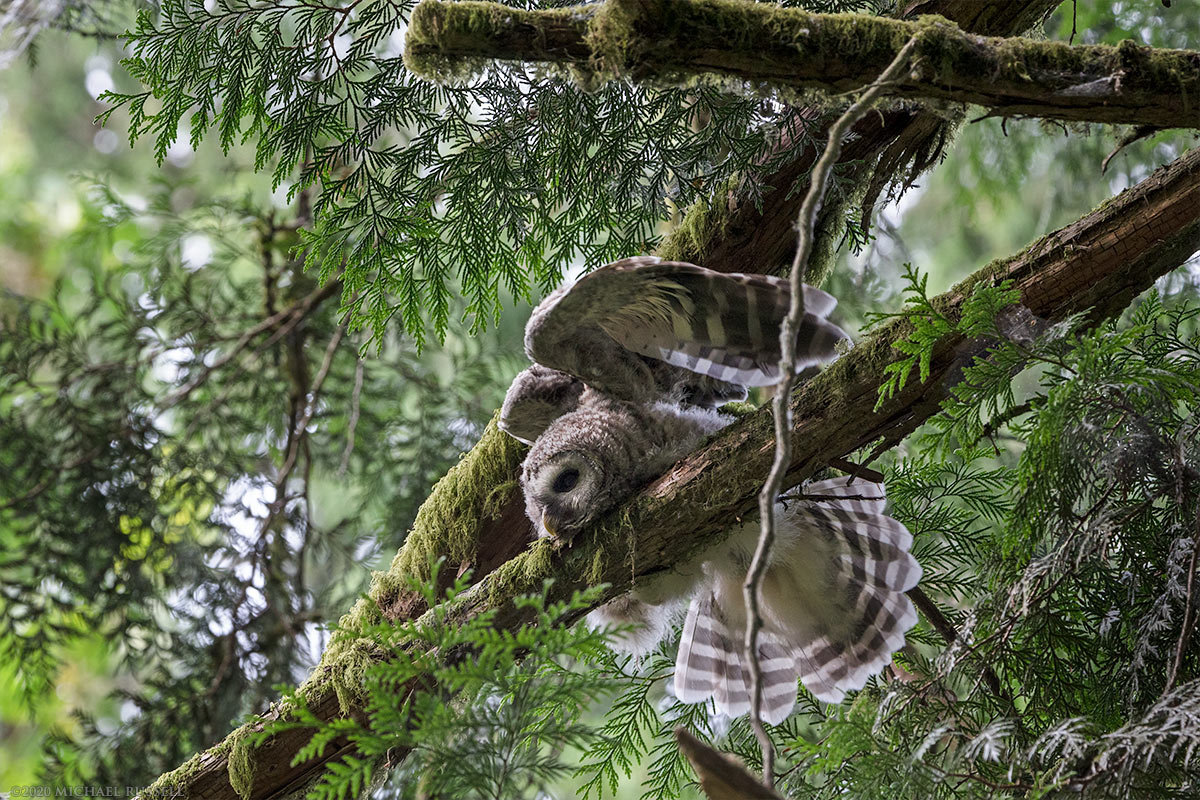 The remaining fledgling remained on the branch itself for a while after that, and sometimes rested its head on the branch (photo above) while stretching out its wings. It really sort of looked like it was bored waiting for an adult to show up with some food. C’mon Mom – I’m hungry!

Eventually the older fledgling joined the younger on the nearby Bigleaf Maple tree, though not initially on the same branch. After a few minutes it hopped around onto a few different branches and then jumped up and rejoined its sibling. I noticed in this new location that both owlets were doing an almost equal amount of begging calls (and simultaneously at times as in the photo above), so perhaps it was getting closer to the time when free food might usually arrive.

The video below is about 2.5 minutes of the ~10min of footage I recorded while viewing these fledglings. My favourite part is probably the first 20 seconds or so. The younger owlet suddenly looks at the older one, does a loud begging call, and the older one looks away. It reads a bit like a bit of a rebuke of sorts! Near the 1 minute mark a Crow can be heard cawing overhead. Crows and a few other species of birds don’t exactly get along with owls, and will harass or mob them when they can. The young owls here didn’t seem perturbed by the overhead cawing, and even let out a few begging calls while the crows were nearby. I would think crows would be smart enough to know what that sound means. Apparently the owls didn’t draw a connection between the cawing and any potential for harassment. Perhaps they haven’t learned or experienced that yet, or the crows don’t often mob fledglings.

For more photographs of these (and other) owls visit my Bird Photos Gallery.